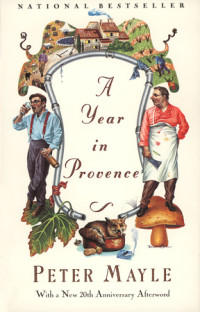 “[Peter Mayle] is something of a wonder . . . chronicling the scene around him in irresistible prose, the joys of a bountiful climate, brilliant sun, and a splendid cuisine.” —Time

Enhance your Book Club experience:
• Host a Provençal evening with your reading group
• A Provençal itinerary for travelers from Fodor’s

About this guide
The questions, discussion topics, and reading list that follow are designed to enhance your group’s reading of Peter Mayle’s delightful books about life in Provence (A Year in Provence, Toujours Provence, Encore Provence), where he and his wife bought a two-hundred-year-old stone farmhouse nestled in the foothills of the Lubéron Mountains.

Summer after summer, the Mayles had fled London in search of two or three weeks under the Mediterranean sun, promising themselves that one day they would make Provence their home. “We had talked about it,” Mayle writes in A Year in Provence, “during the long gray winters and damp green summers, looked with an addict’s longing at photographs of village markets and vineyards. . . . And now, somewhat to our surprise, we had done it.” Each season in their adopted homeland, they soon discover, brings its share of surprises, and every undertaking becomes a small adventure as they adjust to the rhythms of rural life, to the charming idiosyncrasies of the local population, and to a language that at times bears only a passing resemblance to the lessons on their French language tapes. The sense of urgency that ruled their northern, urban lives gives way to an acceptance of the gentler pace of the south. The renovations on their house take months longer than promised, but the workmen’s good humor, enthusiasm, and consummate skill more than compensate for the inconvenience of wintering without kitchen walls, central heating, and dependable electricity. Routine errands to the village become opportunities to wile away hours observing hotly contested games of boules, reading the ever-intriguing gestures that punctuate every street corner conversation, or listening to resident experts hold forth on the weather, history, the behavior of tourists, and local scandals while sipping a pastis at the café. Meals—whether eaten at home, at a neighbor’s, or in one of the dozens of small, family-run restaurants throughout the region—are long, leisurely occasions, dedicated to celebrating Provence’s agricultural bounty, the wines of its productive vineyards, glistening olive oils that range in color from jade green to transparent gold, and, during a short, much-anticipated season, Provence’s gastronomic gem, the truffle.

Mayle’s unbounded curiosity, his well-honed powers of observation, and his wry sense of humor resonate in his tales and in his detailed portraits of the people he encounters—from the plumber with a penchant for philosophizing to the not-always-welcome guests who arrive from colder climes every summer. The books include plenty of tips and recommendations for those who contemplate visiting Provence. But Mayle’s real talent is that he makes it possible to enjoy the sights, sounds, smells, and tastes of this special corner of the world without leaving the comfort of one’s own reading chair.

About A YEAR IN PROVENCE
In an often hilarious chronicle of his first year in Provence, Mayle offers an month-by-month account of the ups and downs he and his wife experience as they oversee the restoration of their house; the effect of the passing seasons on the landscape and on local activities; and the pleasures provided by a variety of charming, if sometimes eccentric, neighbors.

For discussion: A YEAR IN PROVENCE
1. How well did Mayle’s frequent trips to Provence as a tourist prepare him for the reality of residing there? What were some of the initial surprises he and his wife encountered?

2. How does the form of the book—a month-by-month journal—enhance the immediacy of Mayle’s observations and draw the reader into his experiences? How do the changing seasons mirror Mayle’s own adjustment to his new environment?

3. Mayle writes that neighbors take on an importance in the country that they don’t have in the city [p. 6]. How do his relationships with Faustin, Massot, Menicucci, and the other local workmen reflect this? Does the fact that Mayle is a foreigner influence the way he is treated? How do the men working on his house endear themselves to Mayle, despite his continuing frustrations with their casual attitude about completing the job?

4. Mayle notes there are “two areas of endeavor in which France leads the world—bureaucracy and gastronomy” [p. 23]. What particular characteristics of the French does Mayle bring to light in stories about the bureaucracy involved in buying the house, a car, insurance, and other necessities?

5. The influx of tourists begins in May and reaches a high point in August. How does his status as a resident affect Mayle’s attitudes about friends and acquaintances who, as he himself once did, try to take in everything Provence has to offer during a short holiday? Does he learn things about himself and the life he has chosen by looking through the eyes of visitors? To what extent are his own perceptions influenced by his English upbringing?

6. How does the Mayles’ party for the workmen and their wives, as well as their own Christmas dinner at a local restaurant, put the events of the year into context and serve as a coda to the book as a whole?

About TOUJOURS PROVENCE
From a birthday celebration that redefines the meaning of “country picnic” to the furtive business of buying truffles and a short history of pastis (the pride of Provence), Mayle recreates sumptuous feasts, shopping excursions, and wine-tastings, enhancing each event with commentary from experts eager to impart their wisdom about the ways of the countryside.

For discussion: TOUJOURS PROVENCE
1. In “Boy,” “Passing 50 Without Breaking the Speed Limit,” and “Fashion and Sporting Notes from the Ménerbes Dog Show,” Mayle offers affectionate portraits of his wife. Would you have liked to learn more about her? Do you think that as a woman she has a different perspective on life in Provence?

2. Why does Mayle create an air of mystery and suspense when he describes his two excursions to see Monsieur X, the truffle seller? Does the extreme secretiveness surrounding the buying and selling convey something more than the extraordinary value placed on truffles?

3. Why does Mayle find “the wise, venal, and congenitally crafted Massot” [p. 90] so appealing? How do Massot’s peculiarities and his approach to life add an unexpected dimension to Mayle’s portrait of Provence?

4. In “As Advertised in Vogue,” Mayle mocks the Beautiful People who are discovering Provence. Are his criticisms legitimate? Can the “invasion” of outsiders bring benefits to Provence and to other rural areas without destroying the peace and beauty that make them so attractive?

5. Régis, the track suit-wearing gourmet, has definite theories about why France provides the best food and best eating experiences in the world [p. 166-7]. How do American eating habits and expectations compare to those of the French and the English? From your own experience, is it possible to find great, inexpensive restaurants in the United States? Do diners and small town restaurants fill the same role in this country as relais routiers do in France?

6. One of their visitors accuses the Mayles of “going native” [p. 231]. How do the vignettes in Toujours Provence differ from the stories in A Year in Provence? Do they reflect fundamental changes in Mayle and his way of thinking about life?

About ENCORE PROVENCE
Mayle returns to Provence after an absence of four years and plunges into a new round of adventures (including a fascinating tour of Marseilles, a visit to a school devoted to the development of talented nostrils, and a search for the perfect corkscrew) and new reflections on the treasures that make even the most ordinary day in Provence memorable.

For discussion: ENCORE PROVENCE
1. Mayle writes “Memory is a notoriously biased and sentimental editor, selecting what it wants to keep and invariably making a few cosmetic changes to past events” [p 6]. Do you think this is true of your own memories of favorite times and places?

2. How do Mayle’s experiences in America sharpen his appreciation of Provence? Why does he cite the bustling, colorful country markets as the best example of what he missed most during his time in America [p. 14]? How do the markets embody what he loves about Provence?

3. What insights does Marius’s story about the murder of the handsome butcher give you into the ways of life in a small French village? How does his detailed scenario of his own death shed light on the traditions and values of Provence [p. 173-5]?

4. How does Mayle’s “recipe for a village” compare to your own version of an ideal spot? Do you think it is possible to find such a place in America, or have we “advanced” too far to reclaim the kind of simple pleasures Mayle finds in abundance in Provence?

5. Discuss Mayle’s sharp attack on Ruth Reichl’s assessment of Provence [p. 38-43]. Is he overly defensive about his beloved home or do you think that Reichl, a well-known critic, in fact failed to prepare herself properly for her trip and lacked the curiosity and the skills to seek out all that Provence has to offer?

6. Mayle offers “Eight Ways to Spend a Summer Afternoon.” Which of Mayle’s recommendations appeal to you the most and why? What other outings described in the book—for example, the trip to the olive oil factory—would you add to your list of things to do while in Provence?

7. Do Mayle’s descriptions of the people he meets conform to the impressions you may have formed on visits to France or through books and movies? Mayle suggests that the leisurely pace of life, the sunshine, and the abundance of the south encourage the general good humor and cheerfulness of the Provenceaux [p. 12]. Do you think a similar dichotomy between north and south exists in this country?

For discussion of all three books:
1. How does Mayle capture the atmosphere of Provence through language and imagery? Citing specific examples, discuss how he uses the senses of sight, hearing, and smell, as well as metaphors about food, to evoke a mood and create a memorable impression.

2. How do you think natives of Provence would react to Mayle’s descriptions of their life and land? Do you think he tends to idealize or romanticize run-of-the-mill events simply because they are unfamiliar to him?

3. Did your impressions of Provence change from one book to the next? Did it become more or less appealing?

4. Except for his detailed tour of Marseilles, Mayle writes very little about the art, architecture, and cultural history of Provence. Does this detract from the value of the books as accurate portraits of the area? As practical guides for travelers?

5. In addition to his books about Provence, Mayle has written several novels. What elements usually associated with fiction add to the enjoyment of the Provence books? Is Provence portrayed in a more or less desirable light in his nonfiction?

About Peter Mayle
Read an author bio and view a complete list of titles by Peter Mayle available from Random House here.