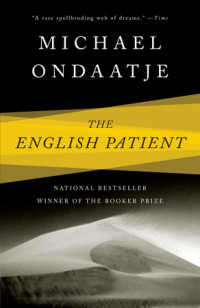 About this guide
The questions, discussion topics, and author biography that follow are intended to enhance your group’s reading of Michael Ondaatje’s The English Patient. We hope that they will give you a number of interesting angles from which to consider this mesmerizing work of fiction, a novel that is simultaneously mysterious, poetic, and romantic.

It is 1944, and the war in central Italy is over. It has moved north, leaving in its wake a landscape of ruined places and people. In an isolated Tuscan villa that served as a military hospital, two people remain, forgotten by the rest of the world: a young Canadian nurse, Hana, almost destroyed by war and the death of her father, and her last patient, a man burned beyond recognition, who drifts in and out of his own memories and dreams. Into their lives comes Caravaggio, a thief who has been tortured and maimed by wartime inquisitors, and Kip, a young Sikh who has spent the war dismantling bombs. While events taking place in the outside world prove that history has reached a definitive turning point, in the Villa San Girolamo Ondaatje’s four protagonists carry on a remote, intensely personal existence, as they play out their interior drama.

For discussion
1. The English patient “whispers again, dragging the listening heart of the young nurse beside him to wherever his mind is, into that well of memory he kept plunging into during those months before he died” [p. 4]. Why does the patient consider himself to have “died”? Does he undergo any kind of rebirth during the course of the story?

2. What can you deduce from the novel about Hana’s relationship with her father? Has her father’s death, and the manner of it, caused her to retreat from the war and devote herself to the English patient? What influence do her feelings for her father have upon her relationship with Caravaggio?

3. Why did Hana decide to have an abortion during the war? How has that decision affected her, and how much influence has it had on her life at the villa?

4. How does the landscape of the novel—the Villa San Girolamo, the country around it, and the boundary between the two—reflect the inner lives of its inhabitants? Why do you think that Ondaatje has chosen Tuscany as the setting for his story? What significance do other landscapes, like the desert and the English countryside, hold for the story and its characters?

5. The English patient says, “I believe in such cartography—to be marked by nature, not just to label ourselves on a map like the names of rich men and women on buildings. We are communal histories, communal books” [p. 261]. How does Ondaatje use maps and cartography as a metaphor for people and history? What does geography mean to the English patient and to Ondaatje’s other characters?

6. Why has Ondaatje made Caravaggio a thief by profession? What is it in his character that makes such an occupation appropriate? “All his life he has avoided permanent intimacy” [p. 116]. Does Caravaggio change during the course of the novel? Does he ever come to accept intimacy, and if so, what type of intimacy and intimacy with whom?

7. The imagery at the beginning of the novel likens the patient to Christ. Later, Caravaggio says to Hana, “You don’t love him, you adore him,” to which she answers, “He is a saint” [p. 45]. Who else is likened to a saint, and why? Where else in the novel can you find religious imagery, and what is its purpose? The night before the Hiroshima explosion Kip sleeps in a church. What is the subject of the painting he sees there, and what is its thematic relation to the imminent atomic explosion?

8. “I came to hate nations,” says the English patient. “We are deformed by nation-states” [p. 138]. How does the desert negate the idea of nations? What sort of supra-national unity is experienced by the Europeans drawn to the desert, and how does each of them respond to the beginning of war? What alternate view of geography and history does the desert offer?

9. After Hiroshima, Caravaggio finds himself agreeing with Kip that “they would never have dropped such a bomb on a white nation” [p. 286]. How does the subject of race and racism enter into this novel? What conclusions, if any, are drawn at the end?

10. Why do you think that Hana removes all the mirrors in the house and puts them in an empty room? Is her own physical presence disturbing to her, or simply irrelevant?

11. What does this novel tell us about the British Empire at the moment it was beginning to dissolve? What are its moral strengths and its fatal weaknesses, as presented by the novel and its characters? What aspect of the Empire do Kip and Lord Suffolk represent, and what does Lord Suffolk’s death symbolize? Was Kip completely misguided in attaching himself to the British? Is his revulsion from them at the end a reasonable response, or is it too violent?

12. “I think when I see him at the foot of my bed that Kip is my David” [p. 116], says the English patient. How can you describe the connection the patient feels between himself and Kip? Is it emotional, political, or dependent upon some other tie? In what way do the two men reflect one another?

13. “Madox was a man who died because of nations” [p. 242], says the English patient. What is it about Madox that makes him experience disillusionment as hopelessness, and commit suicide, while Kip is able to create new life out of similar disillusionment?

14. Why does Katherine treat her lover with physical violence? What does it say about the relationship between the two, and about Almasy’s own character? What does the manner of Katherine’s death tell us? Does it seem to you that Almasy links sex with death and pain? Can you find other places in the novel where sex and death are explicitly connected?

15. What needs and motivations originally drew Hana and Kip together? Might their relationship have been a lasting one, had it not been for the Hiroshima bombing? Why do they not keep in touch in later life, though they continue to think so often of one another?

16. Why do you think that Hana, unlike Kip, has finally “not found her own company, the ones she wanted” [p. 301]? Can Hana be seen as a “victim” of the war, or have her experiences in Italy simply made her more clearsighted and realistic? How do her two renditions of “La Marseillaise” indicate the change that the war has wrought in her?

17. Can the novel can be seen as a mystery, with the identity of the English patient at its heart? Does Caravaggio’s identification of the patient solve the mystery, or does there remain a question at the end? How do other characters in The English Patient, such as Hana, Kip, and Katherine, discover or come to terms with their own identities?

18. How would you describe Ondaatje’s style: does the story resemble a film perhaps, or a dream? Why has he chosen this mode in which to write this particular tale? What is his purpose in making the action move backward and forward in time?

19. The English Patient refers explicitly to Rudyard Kipling’s Kim. If you know this novel, how does its presence within the text contribute to Ondaatje’s theme? In what way, if any, do the characters in The English Patient correspond to those in Kim? Is it significant that Kip was born in Lahore?