One More Story by Ingo Schulze 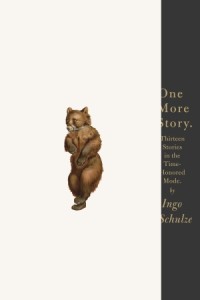 New Year’s Eve 1999, Berlin. At a party to kick off the twenty-first century, Frank Reichert meets Julia, his lost love. Since their separation in the fall of 1989, he’s drifted through life like an exile, remaining apathetic toward the copy-shop business he started even as it flourishes apace. Nothing has the power to move him now: his whole life lies under the shadow of Julia, of the idea that things could have worked out differently. But as night draws on to day, the promised end becomes an unexpected new beginning.

Ingo Schulze introduces us to characters as they stray outside the confines of East Germany into other, newer lives—into Egypt, where the betrayal of a lover turns an innocent vacation into a nightmare; into Vienna, where life starts to mimic art; into Estonia, where we meet a retired circus bear in an absurd (and absurdly hilarious) dilemma—or as they simply stay put, struggling to maintain their sense of themselves as the world around them changes.

Mixed in with these tragicomic tales are some of the most beautiful love stories ever to feature cell phones. And throughout, Schulze’s masterfully controlled style conceals an understated, but finally breathtaking, intricacy.

Ingo Schulze, born in Dresden in 1962, studied classical philology at the University of Jena. His first book, 33 Moments of Happiness, won two German literary awards, the prestigious Alfred Döblin Prize and the Ernst Willner Prize for Literature. He lives in Berlin.