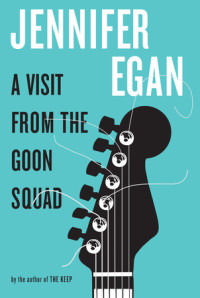 Jennifer Egan’s spellbinding interlocking narratives circle the lives of Bennie Salazar, an aging former punk rocker and record executive, and Sasha, the passionate, troubled young woman he employs. Although Bennie and Sasha never discover each other’s pasts, the reader does, in intimate detail, along with the secret lives of a host of other characters whose paths intersect with theirs, over many years, in locales as varied as New York, San Francisco, Naples, and Africa.

We first meet Sasha in her mid-thirties, on her therapist’s couch in New York City, confronting her long-standing compulsion to steal. Later, we learn the genesis of her turmoil when we see her as the child of a violent marriage, then as a runaway living in Naples, then as a college student trying to avert the suicidal impulses of her best friend. We plunge into the hidden yearnings and disappointments of her uncle, an art historian stuck in a dead marriage, who travels to Naples to extract Sasha from the city’s demimonde and experiences an epiphany of his own while staring at a sculpture of Orpheus and Eurydice in the Museo Nazionale. We meet Bennie Salazar at the melancholy nadir of his adult life—divorced, struggling to connect with his nine-year-old son, listening to a washed-up band in the basement of a suburban house—and then revisit him in 1979, at the height of his youth, shy and tender, reveling in San Francisco’s punk scene as he discovers his ardor for rock and roll and his gift for spotting talent. We learn what became of his high school gang—who thrived and who faltered—and we encounter Lou Kline, Bennie’s catastrophically careless mentor, along with the lovers and children left behind in the wake of Lou’s far-flung sexual conquests and meteoric rise and fall.

A Visit from the Goon Squad is a book about the interplay of time and music, about survival, about the stirrings and transformations set inexorably in motion by even the most passing conjunction of our fates. In a breathtaking array of styles and tones ranging from tragedy to satire to PowerPoint, Egan captures the undertow of self-destruction that we all must either master or succumb to; the basic human hunger for redemption; and the universal tendency to reach for both—and escape the merciless progress of time—in the transporting realms of art and music. Sly, startling, exhilarating work from one of our boldest writers.

Jennifer Egan is the author of The Keep, Look at Me, The Invisible Circus, and the story collection Emerald City. Her stories have been published in The New Yorker, Harper’s Magazine, GQ, Zoetrope, All-Story, and Ploughshares, and her nonfiction appears frequently in The New York Times Magazine. She lives with her husband and sons in Brooklyn.

From our Q&A with Jennifer Egan

Q: Ok, so tell us, what exactly constitutes a “visit from the goon squad”?

A: I knew the title of this book before I knew almost anything else.  So I, too, entered the project in a state of wondering who the Goon Squad was, exactly.  In addition to Proust, whose In Search of Lost Time I was working my way through as I wrote Goon Squad, my other primary literary (if you will) influence was The Sopranos, whose polyphonic structure I found deeply compelling.  So I guess you might say that there are goons in my book’s genome.  The book is certainly full of people who feel beaten up in one way or another—disappointed, out of luck, gypped of what they once expected and still feel they deserve—but these hardships aren’t the work of particular enemies so much as life’s vicissitudes.  Without giving anything away, I’ll say that the reader’s understanding of who the real goon is accrues over the course of the book in much the way that my own comprehension of life’s extreme brevity has overtaken me as I’ve pushed into my forties.  And that’s all I’m going to say!

Q: In the thirteen chapters in this book we meet a large cast of characters and come to see, chapter by chapter, how all of their lives are connected, and often entangled, in surprising ways.  Where did you get the idea to have their stories unfold in this way?

A: It happened organically, and I was led by little more than my own curiosity.  I started with “Found Objects,” the first chapter in the book, and found myself intrigued by the the brief mention of Bennie Salazar, who sprinkles gold in his coffee and sprays pesticide in his armpits. I thought:  Why would someone do those things?  And from that question came the next piece, “The Gold Cure.”  In that one, there’s a mention of Bennie’s ex-wife, Stephanie, who plays tennis at a country club.  And I thought:  Hmm, what’s Stephanie’s story, and how did her marriage to Bennie end?  So I wrote “A to B.”  Small, lateral observations in a character’s life would catch my eye much as they do in my own:  I’m forever watching people and wondering:  Who is that person?  Where is she going right now?  What does his apartment look like?  What expression does he have when he’s completely alone?  And of course, there’s no way to answer those questions without violating people’s privacy!  But in fiction, I can go anywhere I want.

Things really got interesting when the new pieces I was working on began to extend their tentacles to a few pieces I had already written.  One of those was “Goodbye, My Love,” which I wrote in the late nineties in almost exactly the form it takes in the book.  I was standing in the shower one night (the site of many of my inspirations for Goon Squad, for some reason) when I suddenly realized that Sasha, the thief in “Found Objects,” is the same person, years later, as the runaway in “Goodbye My Love.”  They had the same history—no father—and both protagonists had even stolen a wallet!  And yet it wasn’t until that shower that I saw the connection.