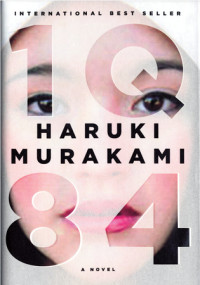 “Having had the honor and pleasure of designing all of Haruki Murakami’s books in hardcover since The Elephant Vanishes, I?was especially looking forward to working on 1Q84, as it is his most ambitious and absorbing novel yet (and that’s saying something). Also, logistically the title is a book designer’s dream, because its unique four characters so easily adapt it to a very strong, iconic treatment. The plot follows two seemingly unconnected stories that eventually weave together. The first involves a woman named Aomame, who in the opening scene finds herself descending a service staircase off a busy elevated highway in Tokyo to escape a traffic jam. Once she gets to the bottom and out onto ground level, she eventually comes to believe that she has entered an alternate reality, one only slightly different than what she had known. She refers to this new dimension in her mind as 1Q84 (the book takes place in 1984 and in Japanese ‘Q’ sounds just like ’9′), with the Q standing for “Question Mark. A world that bears a question.” This concept becomes one of the novel’s major themes.