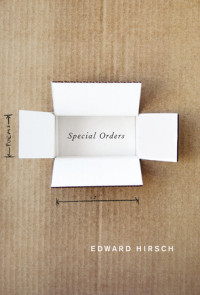 We asked Edward Hirsch, whose collection Special Orders is now out in paperback, to comment on the title of the poem below. He writes, “The French novelist Henry de Montherlant coined the maxim, ‘Happiness writes white,’ which suggests that happiness is a blank that can’t be described. It simply doesn’t show up on the page. My poem playfully but urgently responds to this idea, a common romantic prejudice, by showing that happiness, too, can be written (‘I am a piece of chalk,’ ‘I am a banner of smoke’). Joy, too, is part of life and can be precisely described.”

I am a piece of chalk
scrawling words on an empty blackboard.

I am a banner of smoke
that crosses the blue air and doesn’t dissolve.

I don’t believe that only sorrow
and misery can be written.

Happiness, too, can be precise:

Doctor, there’s a keen throbbing
on the left side of my chest
where my ribs are wrenched by joy.

Wings flutter in my shoulders
and blood courses through my body
like waves cresting on a choppy sea.

Look: the eyes blur with tears
and the tears clear.