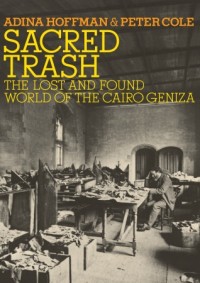 The highly engaging story of the recovery of the Cairo Geniza, which is arguably the greatest discovery of Jewish manuscripts ever made. In Sacred Trash, Hoffman and Cole lead us into the richly textured Jewish world revealed by these manuscripts, as they also present the fascinating life stories of the modern scholars who devoted themselves to unearthing and studying the Geniza documents. The Geniza’s treasures—concealed for centuries behind a wall in one of Cairo’s oldest synagogues—reveal an entire civilization, and include personal letters and landmark poems, wills and marriage contracts, medical prescriptions, Bible fragments, money orders, children’s primers, and magical amulets. Presenting a panoramic view of nine hundred years of vibrant Mediterranean Judaism, Hoffman and Cole bring readers into the heart of this little known trove, whose contents have rightly been dubbed “the Living Sea Scrolls.”

“[Sacred Trash is] . . . a wonderfully passionate and lively account of a civilization we could not have imagined existed and of the men and women whose enthusiasm and dedication brought it to light.” —The Wall Street Journal