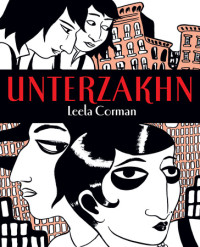 “Historically informed and aesthetically compelling . . . Heavily inked cartoons beautifully depict period details and the Hester Street gossips as times evolve, and show how the two sisters’ similarities change into stark differences in appearance as they age. The text, salted with Yiddish, and the eloquently detailed images meld together to make this a good choice for readers who enjoyed Eleanor Widmer’s Up from Orchard Street or Hubert and Kerascoet’s Miss Don’t Touch Me.”
—Booklist

“Set in New York’s Lower East Side in the early twentieth century, Unterzakhn follows the lives of two sisters, Fanya and Esther . . . Corman gracefully traces both young women’s efforts to maintain control of their bodies in an unpredictable and at times violent world. She steeps her striking black-and-white artwork with period details, particularly in the clothes and the bustling street scenes. In a flashback scene set in Russia, especially, she echoes the swirling evocative style of Russian folk art . . . The story of Fanya and Esther’s struggles is beautifully drawn and hard to forget.”
—Publishers Weekly

“Lures you in with wittiness and sensuality . . . then bites you in the tuchus! Unterzakhn swirls with the energy of Almodóvar and the depth of Dostoyevsky as it follows the fates of two charmingly complicated twin sisters. I loved it.”
—Craig Thompson, author of Habibi