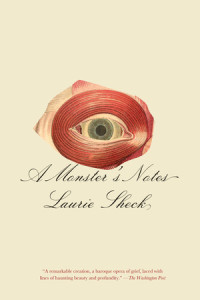 In poet Laurie Sheck’s reimagining of Mary Shelley’s famous monster, the creature we come to know is a highly sensitive observer of the strange lives and works of human beings (who’ve shunned him, with the partial exception of Mary herself; in Sheck’s telling, she meets him at her mother’s graveside as a girl, and later draws upon their relationship to create the novel). The monster’s notes are a gathering of all kinds of information — scientific, philosophical, personal; his lonely account of his travels, including his insights into the tragic lives of Mary and Percy Bysshe Shelley, becomes a moving meditation on outsiderhood, and on the power of the written word to console and connect us. In the passage below, the monster is speaking to the creator who abandoned him. The note he finds is written by Henry Clerval — the doomed friend of Victor Frankenstein in Shelley’s novel, for whom Sheck supplies an improved fate. (Clerval lives out his dream of traveling to the East, where he studies and translates the Chinese classic Dream of the Red Chamber.)

When you fled you left your laboratory notes behind. Though I carry them with me, mostly I have no desire to see your handwriting in front of my eyes (it pains me to see it). But once, as I unpacked my few things in the woods, a note from Clerval slipped out from your papers, and I read it:

My friend, I know you’re suffering and wish there was more I could do to bring you comfort. I still worry about your fever, though I know it’s much better. I worry about the tremor in your hands, the look in your eyes I find troubling but hard to describe, the way you stay always alone (though I myself mostly prefer to be alone). Sometimes I think you’ve mistaken my tenderness for a kind of frailty, some central flaw, an inability to face the harsher aspects of who you are. But I’m less foolish than you think. We’ve known each other from before I can even remember—an intimacy such as ours becomes almost a separate creature, composed of cells we can’t see or hardly fathom. Maybe in some ways we are simply each other’s native tongue. Caxton wrote in Sonnes of Amyon, “It is sayd, that at the end a frende is known.” I don’t believe this. I understand you’re unknowable to me. Still, I’d have liked to comfort you. Now I’ve decided to go east—it’s what I’ve wanted for so long. I’ve told no one, just you. I wish to live out my life among books, even those written in a language I don’t yet understand. I plan to find a teacher in London, then make my way to China. I hope never to return. Your friend always, Henry Clerval

I hadn’t known a human being could sound like that. He used the words “comfort” and “tenderness.” He called you “My friend.” Nights I’d lie in the woods thinking only that I wished I could see him, and wondered, if he saw me, what might he think? Would he flee from me like you did? But he wrote those words…I imagined him not fleeing.

Now I watch his slender fingers turning pages, the way he’s careful with each one, and a feeling almost of peacefulness comes into me.

Sometimes I imagine he left that note for me, not you. And that, along with Sonnes of Amyon (I have since read many books) he also knew this line from Turner, “rais’d by the Comfort of The Sunne to water dry and barren grounds.”

Excerpt from A MONSTER’S NOTES © 2009 by Laurie Sheck. Excerpted by permission of Alfred A. Knopf a division of Random House, Inc. All rights reserved. No part of this excerpt may be reproduced or reprinted without permission in writing from the publisher.