Marie Howe's "After the Movie" 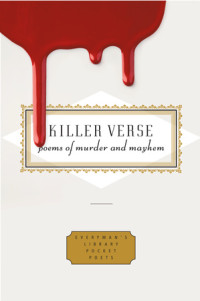 Killer Verse: Poems of Murder and Mayhem is a surprising little volume from our Everyman’s Pocket Poets library. It contains everything from anonymous “murder ballads” and verse by the likes of Thomas Hardy and Robert Browning to more contemporary entries by Frank Bidart, Carol Ann Duffy, and Kimiko Hahn. The below, by Marie Howe, is one of those rare poems that actually captures a conversation as it takes shape, in this case a particularly Manhattan, walking-in-the-West-Village sort of conversation.

My friend Michael and I are walking home arguing
about the movie.
He says that be believes a person can love someone
and still be able to murder that person.

I say, No, that’s not love. That’s attachment.
Michael says, No, that’s love. You can love someone,
then come to a day

when you’re forced to think “it’s him or me”
think “me” and kill him.

I say, Then it’s not love anymore.
Michael says, It was love up to then though.

I say, Maybe we mean different things by the
same word.
Michael says, Humans are complicated: love can exist
even in the murderous heart.

I say that what he might mean by love is desire.
Love is not a feeling, I say. And Michael says, Then
what is it?

Simone Weil says that when you really love you are
able to look at someone you want to eat and not
eat them.

Meister Eckhart says that as long as we love any
image we are doomed to live in purgatory.

Michael and I stand on the corner of 6th Avenue
saying goodnight.
I can’t drink enough of the tangerine spritzer I’ve just
bought -

again and again I bring the cold can to my mouth and
suck the stuff from the hole the flip top made.

What are you doing tomorrow? Michael says.
But what I think he’s saying is “You are too strict.
You are a nun.”

Then I think, Do I love Michael enough to allow him
to think these things of me even if he’s not
thinking them?

Above Manhattan, the moon wanes, and the sky turns
clearer and colder.
Although the days, after the solstice, have started to
lengthen,

we both know the winter has only begun.

Poem © 2008 from The Kingdom of Ordinary Time by Marie Howe, used by gracious permission of W.W. Norton. Excerpt from KILLER VERSE © 2011 by Everyman’s Library. Excerpted by permission of Everyman’s Library, a division of Random House, Inc. All rights reserved. No part of this excerpt may be reproduced or reprinted without permission in writing from the publisher.