Stephanie Saldaña Reflects On Syria and The Bread of Angels 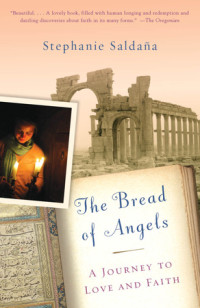 In Stephanie Saldaña’s memoir, The Bread of Angels, she wrote about her journey into Syria in 2004. Since then the country has erupted, and the Syrian conflict now threatens to become a civil war.

In this essay, Saldaña reflects on the conflict and on the role taken on by Italian Jesuit priest Paolo Dall’Oglio, who was recently expelled from the country by the Syrian government.

There is a moment in my memoir, The Bread of Angels: A Journey to Love and Faith, in which I stand across from Hassan, an Iraqi refugee who has found himself stranded in Damascus during the Iraq War. Hassan and I had become unlikely friends, an American and an Iraqi on opposite sides of a war but feeling equally foreign in Damascus. In the book I recount how he handed me an old black-and-white postcard of his beloved Baghdad that he had carried with him when he fled. “When you remember Baghdad, I want you to remember it like this,” he instructed me. “Like it was when it was paradise.”

I have thought of that moment countless times in the past year, for now it is Syria that has exploded, and my Syrian friends have become refugees. As I write this, we are sixteen months into the conflict, and an estimated 13,000 people have died. I find myself examining photos of the recent past, pondering what seemed prosaic details: men sitting outside at cafes, children chasing one another in the courtyards of mosques, men kneeling in churches in front of candles to pray, veiled women visiting Christians shrines to honor Mary. The same magical light that animates these pictures, falling on birds in flight or couples holding hands at dusk, now appears in newspaper photos, casting a ghostly hue to bombed-out streets or bodies wrapped for burial.

Kierkegaard famously wrote that “life can only be lived forwards, but is understood backwards.” When I began The Bread of Angels, a memoir about a year I spent in Syria in 2004, I believed myself to be writing about my experiences as an American in Damascus during the U. S. led invasion of Iraq, learning Arabic, studying Islam with a female sheikh, going on retreat in a desert monastery outside of Damascus to change my life, and falling in love. Though I recognized that the characters who filled the pages were Armenian, Sunni, Shiite, Iraqi, Syrian Christian, Lebanese, French, Italian, Palestinian, and Kurdish, I did not dwell on it much, for at that time Damascus brimmed with this diversity, a vibrant city famous as the place in the Middle East where everyone could flee when they had nowhere else to go. Little did I know that I was capturing a world of fragile coexistence in the final moments before it would disappear, transformed into a tinderbox of alliances ready to ignite a civil war.

The Bread of Angels opens as I arrive in Damascus, a Christian there to study the Muslim Jesus. Faced with no place to live, I walk door to door in the Christian neighborhood of Bab Touma, asking strangers if they might let me live in their house for the year. I find a room just off Straight Street, the biblical street famous for housing St. Paul after he was blinded on his horse, having seen a vision of Jesus. The narrow alleys of collapsing Ottoman Houses in Bab Touma held Christian communities dating back nearly 2000 years, with some of my neighbors still speaking Aramaic, the language of Jesus. I can scarcely imagine a stranger knocking on those houses now. Today, most of those neighbors, along with the majority of Syria’s nearly 2 million Christians, have formed an uneasy alliance with President Bashar al-Assad, afraid that if the minority Alawite regime falls and the majority Sunni Muslims take over, the result could be the migration of thousands of Christians and the dispersal of one of the world’s most ancient Christian communities. The abandoned houses of the Syrian Jews who fled to America and Israel, still vacant just on the other side of Straight Street, surely serve as an uneasy reminder of just how quickly and completely an entire community can disappear.

After an exhausting few months in Damascus I escaped the political turmoil of the capital and fled to the ancient monastery of Deir Mar Musa, perched on a cliff side two hours north. There, I committed myself to silence and prayer, meeting every day with Father Paolo Dall’Oglio, a bear of a man who had arrived at the ruins of the monastery in 1982 and decided to rebuild the ancient site as a monastery where Muslims and Christians would both feel welcome. Fr. Paolo becomes one of the defining figures of my journey, urging me to confront my fears, to believe in resurrection. It is only when we are afraid, he assures me, that we can know that a calling is real.

Today, Fr. Paolo has become one of the most famous figures in the Syrian Revolution. In November of 2011, after months of bloodshed, he took the unusual step of urging Syrian Christians to leave the sidelines of the conflict in order to play the role of peacemakers between the regime and the largely Sunni Muslim opposition, warning that “fear has oppressed us for too long.” In a swift response, the Syrian regime ordered his expulsion from the country he had adopted as his own for thirty years. Muslims across the country declared a Day of Solidarity with Fr. Paolo and held up signs to support him during Friday prayers. Thousands took to Facebook to protest his expulsion. Paolo became proof that Muslims and Christians in Syria were not destined to destroy one another. In a rare act, the government never carried out his expulsion. In May, Fr. Paolo traveled to the embattled city of Qusayr to fast and pray for peace, meeting with terrified Christian families to give them hope, breaking his fast with members of the Muslim opposition. On June 14, he finally announced that the Church authorities had requested that he leave the country after thirty years. “I am deeply hurt when I think of this divided, suffering country that has a mortal wound,” he told Vatican Radio that day. “I am not leaving Syria: this is just my corpse that is leaving Syria. I remain one hundred percent in Syria.”

After a month living and praying in the monastery, I returned to Damascus, where my spiritual journey turned toward Islam. I became the Christian pupil of “The Sheykha,” an elegant and deeply learned female Sunni Sheikh who ran the oldest Quranic school for girls in Damascus. For a period of months, the Sheykha took me under her wing, teaching me to read and recite the Quran. “Don’t stay away from us too long,” the Sheykha urged me when I left the country. But it is the Sheykha who is now gone, exiled to the Emirates after Damascus became too dangerous for her and her family in the crackdown on Sunni Muslim leaders. Dozens of her students have joined the protests against the government in Damascus, their bodies appearing like a sea of white veils in videos posted on YouTube. The oldest female Quranic school in Damascus is now closed, another world I wrote about now only a memory.

And what of Hassan with his postcards, a man now destined to wake up every morning out of place? The last I heard he had disappeared onto an island in Greece, where he fell ill with cancer, but was grateful to be next to the sea.

Everything ends, but I still have difficulty accepting that so much could disappear so quickly. My losses are but a few among thousands. I look back on my year as a still point in history in which impossible opposites somehow held together, next to one another, and for a brief period sang. I can still hear that singing. I mourn the loss of that world every day.

Click to read an excerpt from The Bread of Angels and to download our reading group guide.