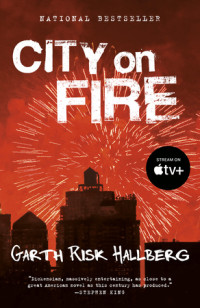 There are few places in the world as iconic as New York City. For decades it has played the muse for artists of all sorts, from novelists to poets to musicians. It is no surprise that Garth Risk Hallberg’s debut novel, City on Fire, is predicated so heavily on the idea of New York City as a character itself. In this ambitious novel, the setting is essential to the story, with neighborhoods and streets influencing the characters just as much as the characters themselves act upon their environment.

In City on Fire, a book that was met with much excitement and acclaim when it was first published in hardcover, a shooting in Center Park on New Year’s Eve triggers a series of far-reaching consequences affecting a number of seemingly unconnected characters. The unraveling of the mystery leads readers on a vividly imagined tour through the grittiness of 1970s New York. We’ve recreated this experience in an interactive map that will take you on a journey through Hallberg’s world, guided by quotes from the book itself.

Explore the map below!