America, You Probably Think This Book Is About You: Omar El Akkad on the Setting of American War 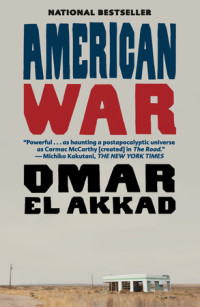 Omar El Akkad’s novel American War takes place in a United States of the future that is simultaneously familiar and foreign. Given recent political events, it could be read as a warning to America, but is that missing the point? We asked El Akkad why he chose the United States for his novel’s setting and his answer shifted our perspective, encouraging us to broaden our worldview and elevating his work to even greater importance. There’s a reason American War’s America feels uncomfortably realistic, and it’s not because it’s where we’ll be in 2075.

It’s been ten months since American War was first published. During that time, I’ve fielded hundreds of questions about the book. Of these, the most common has to do with plausibility — do I really think this is how a second American Civil War might play out?

The answer is no. I started writing the novel in the summer of 2014 and finished the first draft a few weeks before Donald Trump announced his candidacy for President and at no point did I ever consider the book to be primarily concerned with the fortunes of the United States. American War was never in my mind a book about America; it just had to be set here.

I started writing American War because I wanted to write a story about the universal nature of revenge — the way damaged begets damage. I wanted to dismantle the comfort of distance, the privilege we have of living in this relatively peaceful part of the world, far away from the places where terrible, endless wars are waged on our behalf. I wanted to take the defining elements of these wars — drone killings, enhanced interrogation, refugee crises — and bring them close to home. And I couldn’t think of anything closer to home than a civil war at the heart of the world’s dominant empire.

The result is a kind of inversion that, in its opposite form, has long been a staple of Western culture. From Casablanca to The Sheltering Sky to just about every James Bond or Jason Bourne movie ever made — faraway, “exotic” places are frequently used as a stage for the telling of Westerners’ stories. It happens so often, most of us hardly notice it anymore. All I attempted to do (and whether I succeeded or failed is another matter entirely) is flip the script. In American War, the United States is the faraway, exotic place, the setting for another peoples’ story.

In truth, the novel makes no serious effort to predict what a literal second American Civil War might look like. I chose fossil fuel prohibition as the war’s precipitating cause in the book not because I think that is the most likely reason America might once again go to war with itself, but because the continued use of a ruinous fuel despite all evidence of its destructive nature seemed to me a useful analogy for the kind of searing stubbornness that so often compels human beings to kill one another.