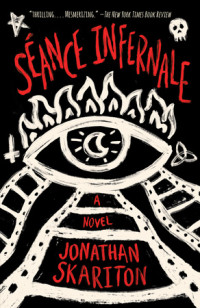 Here at the Reading Group Center, we love a good adventure! There’s something exhilarating about traveling around the world chasing a mystery, brushing up against danger, and finding yourself in circumstances you never thought you’d encounter. Unfortunately, we aren’t always able to hop on a plane to destinations unknown, and if we’re being completely honest, when it comes down to it we aren’t the biggest of risk takers. Luckily, with these reads we can get our heart rates up without actually putting ourselves in harm’s way, all from the comfort—and safety–of our couch.

Jonathan Skariton’s debut novel, Séance Infernale, is exactly the type of book to get our blood pumping. A detective tracking down a valuable object, a conclusion to one mystery only leading to more questions, and the possible consequences increasing at every turn—what more could we ask for? It goes even deeper, offering plenty of discussion topics, including the interplay between art and crime, the intersection of past and present, and the correlation between genius and madness. With its nonstop pace, we’re willing to bet you’ll speed through this one and, if you’re anything like us, immediately want another. We’ve created a list of literary adventure books to keep you and your book group satisfied.

“Breathless readers will scramble to keep up.” —Publishers Weekly

Los Angeles, 2002. Alex Whitman is hired by an enigmatic collector to locate what could be the first movie ever made—Séance Infernale. Its creator, Augustin Sekuler, is considered by those in the know to be the true inventor of motion pictures—not the Lumière brothers or Thomas Edison. In 1890, Sekular had boarded a Paris-bound train from Dijon, days before he was to present to the world his greatest new invention: a moving picture machine. But he never arrived at Gare de Lyon. He and his moving picture machine vanished, never to be heard from again.

When Whitman tracks down what could be fragments of Sekuler’s famously lost film, questions are raised—about Sekuler, about the fate of him and his invention, and about the film itself. And the stakes become ratcheted up as these riddles lead to a darker, far more dangerous mystery. At once riveting, atmospheric, and filled with vivid historical detail, Séance Infernale is a heart-pounding work of mystery and suspense.

The Devil Aspect by Craig Russell

“A wildly entertaining story that grabs you on Page 1 and drags you into its dark world kicking and screaming.” — The New York Times Book Review

Steeped in the folklore of Eastern Europe, and set in the shadow of Nazi darkness erupting just beyond the Czech border, this bone-chilling, richly imagined novel is propulsively entertaining, and impossible to put down.

Czechoslovakia, 1935: Viktor Kosárek, a newly trained psychiatrist who studied under Carl Jung, arrives at the infamous Hrad Orlu Asylum for the Criminally Insane. The facility is located in a medieval mountaintop castle surrounded by forests, on a site that is well known for concealing dark secrets going back many centuries. The asylum houses six inmates–the country’s most treacherous killers–known to the terrified public as the Devil’s Six. Viktor intends to use a new medical technique to prove that these patients share a common archetype of evil, a phenomenon he calls The Devil Aspect. Yet as he begins to learn the stunning secrets of these patients, he must face the unnerving possibility that these six may share a darker truth.

Meanwhile, in Prague, fear grips the city as a phantom serial killer emerges in the dark alleys. Police investigator Lukas Smolak, desperate to locate the culprit (a copycat of Jack the Ripper), turns to Viktor and the doctors at Hrad Orlu for their expertise with the psychotic criminal mind. And Viktor finds himself wrapped up in a case more terrifying than he could have ever imagined.

The Improbability of Love by Hannah Rothschild

“Riveting. . . . With its colorful cast of characters and richly layered plot, The Improbability of Love is entertaining and suspenseful.” —USA Today

At once a fiendishly devious mystery, a beguiling love story, and a brilliant symposium on the power of art, My Name Is Red is a transporting tale set amid the splendor and religious intrigue of sixteenth-century Istanbul, from one of the most prominent contemporary Turkish writers.

The Sultan has commissioned a cadre of the most acclaimed artists in the land to create a great book celebrating the glories of his realm. Their task: to illuminate the work in the European style. But because figurative art can be deemed an affront to Islam, this commission is a dangerous proposition indeed. The ruling elite therefore mustn’t know the full scope or nature of the project, and panic erupts when one of the chosen miniaturists disappears. The only clue to the mystery—or crime?—lies in the half-finished illuminations themselves. Part fantasy and part philosophical puzzle, My Name is Red is a kaleidoscopic journey to the intersection of art, religion, love, sex and power.

“A quick, fun, breathless read. It’s inventive and scary—and a delightful take on the writing life.” —The HuffPost

From the internationally bestselling author of Measuring the World and F, an eerie and supernatural tale of a writer’s emotional collapse.
A screenwriter, his wife, and their four-year old daughter rent a house in the mountains of Germany, but something isn’t right. As he toils on a sequel to his most successful movie, the screenwriter notices that rooms aren’t where he remembers them—and finds in his notebook words that are not his own.

“Part ghost story, part travelogue, White Tears is a drugged-out, spoiled-rotten treatise on race, class and poverty of the soul.”—TIME

Seth is a shy, awkward twentysomething. Carter is more glamorous, the heir to a great American fortune. But they share an obsession with music—especially the blues. One day, Seth discovers that he’s accidentally recorded an unknown blues singer in a park. Carter puts the file online, claiming it’s a 1920s recording by a made-up musician named Charlie Shaw. But when a music collector tells them that their recording is genuine—that there really was a singer named Charlie Shaw—the two white boys, along with Carter’s sister, find themselves in over their heads, delving deeper and deeper into America’s dark, vengeful heart. White Tears is a literary thriller and a meditation on art—who owns it, who can consume it, and who profits from it.

An ingenious code hidden in the works of Leonardo da Vinci.

A desperate race through the cathedrals and castles of Europe.

An astonishing truth concealed for centuries . . . unveiled at last.

While in Paris, Harvard symbologist Robert Langdon is awakened by a phone call in the dead of the night. The elderly curator of the Louvre has been murdered inside the museum, his body covered in baffling symbols. As Langdon and gifted French cryptologist Sophie Neveu sort through the bizarre riddles, they are stunned to discover a trail of clues hidden in the works of Leonardo da Vinci—clues visible for all to see and yet ingeniously disguised by the painter.

Even more startling, the late curator was involved in the Priory of Sion—a secret society whose members included Sir Isaac Newton, Victor Hugo, and Da Vinci—and he guarded a breathtaking historical secret. Unless Langdon and Neveu can decipher the labyrinthine puzzle—while avoiding the faceless adversary who shadows their every move—the explosive, ancient truth will be lost forever.

“The journey, with all its wild, wicked, sweet, painful, courageous, outrageous, and obscene encounters . . . will stay with the reader after the blood dries.” —The New York Times

One night up in Montana, C.W. Sughrue sets his seedy bar’s pricey jukebox in front of an oncoming freight train. When predictable results ensue, he needs to find a way to make some money and pay back the jukebox company. So even though Sughrue’s officially retired from P.I. work, he picks up one small-time case involving some kidnapped fish. That fishy trail leads to a much bigger case involving a Texas politician’s kidnapped wife, a valuable piece of pre-Columbian pottery, and a single mother who packs guns and stolen goods in her infant son’s diaper bag.

The Lost City of Z by David Grann

“Suspenseful. . . . Rollicking. . . . Reads with all the pace and excitement of a movie thriller. . . . The Lost City of Z is at once a biography, a detective story and a wonderfully vivid piece of travel writing.” —The New York Times

In 1925, the legendary British explorer Percy Fawcett ventured into the Amazon jungle, in search of a fabled civilization. He never returned. Over the years countless perished trying to find evidence of his party and the place he called “The Lost City of Z.” In this masterpiece of narrative nonfiction, journalist David Grann interweaves the spellbinding stories of Fawcett’s quest for “Z” and his own journey into the deadly jungle, as he unravels the greatest exploration mystery of the twentieth century.