The Books in My Book: Jana Casale on the Books She Loved Enough to Include in Her Novel 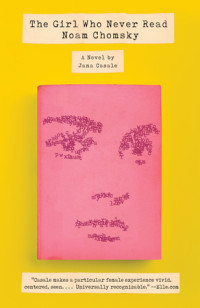 My novel, The Girl Who Never Read Noam Chomsky, at its very simplest is a book about a woman who wants to read a book but never does. Despite this, my main character, Leda, is a reader, and so throughout the novel I reference lots of books that she does read, many of which I have read (and some of which I haven’t yet gotten around to), all of them a reflection of myself and where I was when I was writing more than they are a reflection of my character. And so I’m excited to share a list of novels I loved so much, I put them in my own novel so that they could be intrinsically apart of me and my writing forever.

My mom gave me Leo Tolstoy’s Anna Karenina for my seventeenth birthday. She wrote on the inside of the cover, “Let this beautiful book expand your horizons into womanhood.” Since then it’s been my all time favorite book, and so naturally I had to include it. Anna Karenina is a novel about a woman who chooses love and leaves her husband and children, her entire life, to be with a man she genuinely loves because she hopes to be happy. That hope and her willingness to pursue her own joy in a time when women and their happiness was certainly secondary to family and duty is what makes her such a beautiful character, and what makes the tragedy of the novel all the more sharply felt. I find Tolstoy to be a surprisingly accessible writer, and despite the novel’s epic length and political and social complexity, his understanding of people and family dynamics makes his characters relatable and very often lovable. There really aren’t words to say what this novel means to me as a writer and reader. I couldn’t recommend it more.

The House of Mirth by Edith Wharton

I only mention Edith Wharton’s House of Mirth very briefly in the novel, but I had to include it here because it is another one of my all-time favorites. I read it as an undergrad in a literature class devoted to women writers. I loved the class and I remember the professor saying before we read it, “You may not like the main character in this next novel because she’s kind of a brat.” I adore Wharton’s Lily Bart. Yes, she is a woman who loves nice things, and in so many ways materialism is what drives her, but she is unwilling to compromise and marry a disgusting rich guy in order to get those things, and how can you find that anything but energizing? I think most would consider the novel a reflection of a very specific time and place, but if you look at the women on the Forbes 100 list, you’ll notice too many of them are there because of their father’s money or their husband’s. We’re moving forward, but not fast enough. May we all have a little Lily Bart in us.

When I write I typically avoid reading fiction because I have the habit of taking on the voice of whatever I read, and it can make getting back into my own work difficult. I will take breaks from writing just so I can read, and it was on one of these breaks that I read Cat’s Eye by Margaret Atwood.  It is such a good book. Atwood is most famously known for her speculative fiction, but this book is my favorite of her’s. It’s the story of an artist who at 50 returns to her hometown of Toronto for a retrospective on her work. Once she’s there, memories from her childhood come flooding back and she is forced to confront the complicated and often troubling relationship she had with a friend who tormented her through much of her youth. This book brilliantly encapsulates the way memory informs our present, and it delves into the relentless way childhood forms our identity. A striking read.

The Neapolitan Novels by Elena Ferrante

I read Elena Ferrante’s Neopolitan novels while I was going through the final editing stage of my novel. After reading the first book in the series, I recommended it to my mom, and we both finished the series side by side in a matter of weeks (she definitely finished them first, as the absurdly and obnoxiously fast reader that she is). Chronicling decades of the friendship of two women from Naples, Ferrante expertly and bravely parses a part the brutality, love, and intricacies of friendship among women. The books read so intimately despite the social and political complexity that makes for the stunning backdrop of her protagonist’s life. Few writers are willing to be as candid in their work as Ferrante. She understands women and understands their relationships with one another and is brutally honest about where love ends and where viciousness begins. It’s refreshing, and invigorating, and as masterful as it gets.

Problems of Knowledge and Freedom by Noam Chomsky

What would this list be without me talking about the Noam Chomsky book that Leda doesn’t read? I chose to use Noam Chomsky’s Problems of Knowledge and Freedom purely based off the title alone. I liked that it included the words “knowledge” and “freedom,” and I thought those words fit nicely in with some of the themes of my book in relation to my character’s own knowledge and freedom. Despite how randomly it was chosen, I felt like it was only right that I read it. It turned out that the book is actually a compilation of Chomsky’s lectures that he delivered in Cambridge in 1971 in honor of Bertrand Russell. I don’t think this book as it stands is the best place to start for a reader interested in getting into Chomsky’s work, but I nonetheless found it fascinating, enlightening, and surprisingly pertinent to our current times. He’s a brilliant person and a dynamic and engaging writer whose work is more accessible than one might expect given the complexity of his subject matter. And it’s made me, unlike my character, the girl who did read Noam Chomsky.