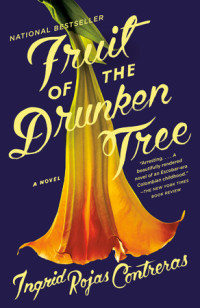 Ingrid Rojas Contreras grew up in a nice neighborhood in Bogotá, Colombia, but she was always aware that there was another, darker and more dangerous, world outside the gates of her community. The separation of class and privilege that she witnessed became the inspiration for her bestselling debut novel Fruit of the Drunken Tree, which tells the story of the friendship between a young girl and her family’s maid.

Fruit of the Drunken Tree is a product of a childhood spent listening to the stories of the women around me in Colombia. I grew up in Bogotá a quiet and curious child, and my favorite activity was to listen. Maybe it was because my energy was always running low—I never had the urge to run and climb trees like other children—or maybe it was because I was a nervous child, and my nervousness compelled me to try to understand the inscrutable danger that surrounded me. The television made me nervous, as did being outside—but who was the enemy? I didn’t know. That is why, as a young girl, I spent a lot of time trying to seem invisible.

If I sat quietly and crossed one leg over the other like Mami and held my breath, Mami forgot I was there and her friends talked freely. If I was careful not to verbalize a response—if instead of laughing or sighing or moving rapidly, I sat contained and still like a statue—then I was allowed to listen in on the world of adults. I heard stories about men hitting women, unwanted pregnancies, crossfires, and kidnappings. I heard stories about fathers and brothers, that also hit their women, kicked them out of the house, and forced them to marry someone in order to keep the family’s honor. Every once in a while, Mami’s friends would become aware of me, and stop speaking. “Should your little one be hearing this?” Mami would turn to look at me, and then she’d weigh something as she scrutinized my face. Sometimes Mami decided I needed to go out and play, but other times, she’d allow me to stay. “Don’t worry about her,” she’d say, waving the air as if there was a pesky mosquito next to her ear. “She’s going to find out at some point, so…”

I liked listening because something important took place when I did. While no adult could tell me what life was about when I asked them, when I listened to women talking amongst themselves, I found an answer in the complications of how life went for other people.

One time I heard something that made a deep impression. It was a sunny afternoon and the very young girl we employed at our home at the time arrived crying. Let’s say her name was Diana. Mami ushered Diana into the kitchen where she was bid to sit on a stool while Mami made tea and I rubbed her back in circles. I don’t exactly remember what she said, but I remember, very well, the shock of hearing that her father was dead, that the body had turned up in the middle of a road, that it had been chopped with a machete, that she herself had had to collect the parts of her father and that she dropped them into a plastic bag. Mami never asked who had done it, and Diana never offered. It could have been the paramilitary or the guerrillas. What I knew for sure was that here was the face of the danger that was less present in my life, and was absolutely present in Diana’s, and it all had something to do with the different neighborhoods we lived in.

Mami was consoling Diana, telling her she would pay for a special mass to be held in honor of her father so that his spirit could rest, when Diana turned to look at me. I must have looked terrified, because Diana turned to Mami and apologized: “Ay, perdón Señora, she shouldn’t have heard.” “It’s okay, I’m okay,” I said, and left the house on my own to go outside and play. But outside, I stared at the sky and felt numb and old.

Mine was not an innocent childhood. I did not grow up thinking the world was safe since the women around me were not safe. I thought then that misfortunes befell the different women around me because of bad luck, but now I know it is not luck—it is class, systemic oppression, and the weight of history. When I started to write Fruit of the Drunken Tree, I knew it was important to have two voices that could give an idea of two Colombias—the Colombia of the middle class and the Colombia of the displaced. If as a girl, I had transgressed the gulf of class by my listening, I wanted to write a book that did the same.