7 Books about Life in the Wake of Tragedy 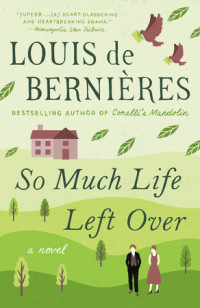 It’s pretty obvious to any bibliophile that we can learn a lot from the books we read. Not only can they offer more practical guidance, but they also provide examples of how to cope—or, in some cases, not cope—with whatever life throws at us. The list below consists of seven novels that tackle life in the wake of tragedy. From airplane crashes to gun violence to catastrophic fires, these stories offer a fascinating glimpse into the many different ways that people can choose to go on after unspeakable heartbreak. It’s truly remarkable how a talented novelist can make such difficult themes so much easier to process as a reader, and we are grateful to them for reminding us of the incredible resiliency of human beings.

So Much Life Left Over by Louis de Bernieres

They were an inseparable tribe of childhood friends whose world was torn apart by the First World War. Some were lost in battle, and those who survived have had their lives unimaginably upended, scattered to Ceylon and India, France and Germany, and, inevitably, back to Britain. Now, at the dawn of the 1920s, all are trying to pick up the pieces. Told in brief, dramatic chapters, So Much Life Left Over follows the stories of these old friends over the decades as their paths re-cross or their ties fray, as they test loyalties and love, face survivor’s grief and guilt, and adjust to a new world.

Waiting for Eden by Elliot Ackerman

Eden was once big and bold and physical. His fellow Marines nicknamed him “BASE Jump.” But now Eden lies in a bed, unable to move or speak. His wife Mary spends every day on the sofa in his hospital room. He has never even met their young daughter. And he will never again see the friend and fellow soldier who didn’t make it back home—the soldier who narrates the novel as he waits for Eden to finally, mercifully die and join him in whatever comes after.

But one Christmas, Eden’s re-ordered consciousness flickers back to life. As he struggles to find a way to communicate, some troubling truths about his marriage–and about his life before he went to war—come to the surface. Is Eden the same man he once was: a husband, a friend, a father-to-be? When so much is lost, what makes a life worth living?

Only Child by Rhiannon Navin

“Emotional . . . sinks its hooks into you from the very first sentence.” —Marie Claire

First grader Zach Taylor is in his classroom when a gunman enters the school auditorium and the unthinkable happens, irrevocably changing the very fabric of this close-knit community.

While Zach’s mother pursues a quest for justice, and Zach’s father retreats into his work, Zach finds solace in the healing world of books and art. Armed with his new insights, and the optimism and stubbornness only a child could have, Zach becomes determined to help the adults in his life rediscover the universal truths of love and compassion they need to pull them through their darkest hour.

In the bitter winter of 1946, Rachael Morgan arrives with her only remaining son Edmund in the ruins of Hamburg. Here she is reunited with her husband Lewis, a British colonel charged with rebuilding the shattered city. But as they set off for their new home, Rachael is stunned to discover that Lewis has made an extraordinary decision: they will be sharing the grand house with its previous owners, a German widower and his troubled daughter. In this charged atmosphere, enmity and grief give way to passion and betrayal.

The Accidental Tourist by Anne Tyler

“A delight . . . a graceful comic novel about getting through life.”—The Wall Street Journal

Travel writer Macon Leary hates travel, adventure, surprises, and anything outside of his routine.  Immobilized by grief, Macon is becoming increasingly prickly and alone, anchored by his solitude and an unwillingness to compromise his creature comforts. Then he meets Muriel, an eccentric dog trainer too optimistic to let Macon disappear into himself. Despite Macon’s best efforts to remain insulated, Muriel up-ends his solitary, systemized life, catapulting him into the center of a messy, beautiful love story he never imagined.

“[A] page-turner, emotionally resonant and down-to-earth. . . . Like reconnecting with a long-lost friend.” —The New Yorker

In this brilliant new novel Judy Blume takes us back to the 1950s and introduces us to the town of Elizabeth, New Jersey, where she herself grew up. Here she imagines and weaves together a vivid portrait of three generations of families, friends, and strangers, whose lives are profoundly changed during one winter. Their warm and resonant stories are set against the backdrop of a real-life tragedy that struck the town when a series of airplanes fell from the sky, leaving the community reeling.

The Stars are Fire by Anita Shreve

In October 1947, Grace Holland is experiencing two simultaneous droughts. An unseasonably hot, dry summer has turned the state of Maine into a tinderbox, and Grace and her husband, Gene, have fallen out of love and barely speak. One night she awakes to find that wildfires are racing down the coast, closer and closer to her house.  Forced to pull her children into the ocean to escape the flames, Grace watches helplessly as everything she knows burns to the ground.  By morning, her life is forever changed. With courage and stoicism, Grace overcomes devastating loss and, through the smoke, is able to glimpse the opportunity to rewrite her own story.