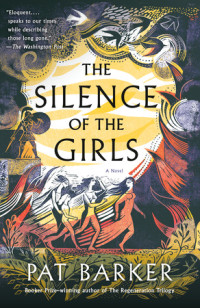 Pat Barker is an award-winning, critically acclaimed author, and one of the most accomplished novelists of our time. Barker’s The Ghost Road, part of her bestselling Regeneration Trilogy won the Booker Prize, and now she’s back with her latest novel, The Silence of the Girls, which was a finalist for the Women’s Prize for Fiction. Diana Gabaldon, author of Outlander, describes Barker’s most recent book as “brilliant . . . fascinating, riveting and blood-chilling.”

The Silence of the Girls is a masterful retelling of The Iliad as experienced by the captured women living in the Greek camp in the final weeks of the Trojan War. Offering nuanced, complex portraits of characters and stories familiar from mythology, it’s perfect for fans of Madeline Miller and Colm Tóibín.

To celebrate the paperback release of The Silence of the Girls, allow us to introduce you and your reading group to just a few of Pat Barker’s remarkable novels.

The Silence of the Girls

“Eloquent. . . . Speaks to our times while describing those long gone.” —The Washington Post

Here is the story of The Iliad as we’ve never heard it before: in the words of Briseis, Trojan queen and captive of Achilles. In these pages she comes fully to life: wry, watchful, forging connections among her fellow female prisoners even as she is caught between Greece’s two most powerful warriors. Her story pulls back the veil on the thousands of women who lived behind the scenes of the Greek army camp as gods and mortals spar, and as a legendary war hurtles toward its inevitable conclusion.

In the spring of 1914, a group of students at the Slade School of Art have gathered for a life-drawing class. Paul Tarrant is easily distracted by an intriguing fellow student, Elinor Brooke, but watches from afar when a well-known painter catches her eye. After World War I begins, Paul tends to the dying soldiers from the front line as a Belgian Red Cross volunteer, but the longer he remains, the greater the distance between him and home becomes. By the time he returns, Paul must confront not only the overwhelming, perhaps impossible challenge of how to express all that he has seen and experienced, but also the fact that life, and love, will never be the same for him again

It is 1917, and Elinor Brooke, a young painter, is studying art in London while her beloved brother Toby serves on the front as a medical officer. When Toby goes missing and is presumed dead, the devastated Elinor refuses to accept it. Then she finds a letter hidden among his belongings; it reveals that Toby knew he wasn’t coming back and implies that his friend, medic Kit Neville, knows why. But Kit has been horribly disfigured and is reeling from shell shock. While Elinor tries to piece together the mystery of what happened to her brother, she uses her drawing skills to aid in the surgical reconstruction of those who have suffered unspeakable losses—of their faces, their memories, their very minds.

London, 1940. As bombs fall onto the blacked-out city, ambulance driver Elinor Brooke, working alongside former friend Kit Neville, races from bomb sites to hospitals, while her husband Paul Tarrant works as an air raid warden. Once fellow students at the Slade School of Fine Art before the First World War, the three now find themselves caught in another war—this time at home.

As the bombing intensifies, into their midst comes the spirit medium Bertha Mason, grotesque and unforgettable, whose ability to make contact with the deceased finds vastly increased demands as death rains down from the skies. Old loves and obsessions resurface until Elinor is brought face to face with an almost impossible choice.