Chris Cander on the Things We Inherit 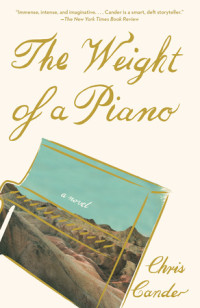 Author Chris Cander began her career with an award-winning self-published novel that quickly attracted the attention of book critics and readers alike. Now her third novel, The Weight of a Piano, is available in paperback, and it’s easy to see why her novels have been received so well. The Weight of a Piano is a tour de force about two women and the musical instrument that inexorably ties their lives together though time and across continents. Cander found the seed of the idea at a meeting with a reading group (!!!), and we couldn’t wait to learn more about the circumstances surrounding this moment of inspiration. Keep reading to find out more in the author’s own words!

After finishing a discussion with a book club about my first novel, 11 Stories, I overheard a woman talking about finally letting go of a piano her father had given her when she was a child. On its own, that information might not have struck me as particularly interesting, but she spoke about it with an unexpected and gripping balance of relief and regret, so I asked her if she’d tell me more. She said that she’d been taking lessons at her father’s behest for several months when he died, and afterward, the instrument became a symbol of her grief—and also of him. She no longer wanted to play it, but also couldn’t get rid of it.

I was immediately invested in the concern of letting go of a treasured object because I’ve long struggled with my own relationship to objects with provenance. By nature I appreciate minimalism and order, but I was born into a family of artists and archivists, and we have a lot of stuff: my grandfather’s countless woodworking treasures; handmade quilts and blankets from the women on my mother’s side; my father’s photographs, souvenirs, and mementos that have been passed down from one generation to another. Part of me wants to preserve everything with the care and love it deserves, and part wants to set it all on fire.

I left that brief encounter fixated on the idea of a character having only a single physical object—an enormous, expensive, burdensome one—that represented her lost childhood. After a great deal of research and years of writing, that idea became The Weight of a Piano. It’s the story of two women, one a pianist in Soviet Russia and the other a modern-day auto mechanic in California, and their very different relationships to the same upright Blüthner piano. For the former, the piano is her prized possession, and the latter, it’s a burden both emotional and physical. After exploring how these characters lived both with and without the piano, I now have a pretty good idea about what I’ll do with all the things I’ll eventually inherit.