The Haunted Houses of Literature 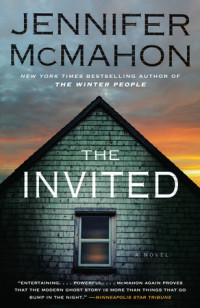 Here at the Reading Group Center, winter has officially taken hold, and the cold, dark weather has us reaching for similarly atmospheric books. We’re particular fans of Jennifer McMahon and her deliciously chilling novels, the latest of which is now available in paperback!

The Invited is an unnerving ghost story with a twist. It tells the story of a husband and wife who don’t simply move into a haunted house—they build one. It got us thinking about all of the other ghost stories that will chill you and your reading group to the bone on these dreary January evenings. So grab one of these reads, cozy up on the couch, and get ready for a good haunting!

The Invited by Jennifer McMahon

In a quest for a simpler life, Helen and Nate have abandoned the comforts of suburbia to take up residence on forty-four acres of rural land where they will begin building the house of their dreams. When they discover that this beautiful property has a dark and violent past, Helen becomes consumed by the local legend of Hattie Breckenridge, a woman who lived and died there a century ago. With her passion for artifacts, Helen finds special materials to incorporate into the house—a beam from an old schoolroom, bricks from a mill, a mantel from a farmhouse—objects that draw her deeper into the story of three generations of Breckenridge women, each of whom died suspiciously. As the building project progresses, the house will become a place of menace and unfinished business: a new home, now haunted, that beckons its owners and neighbors toward unimaginable danger.

When Nick Beron and Hannah Rampe decide to move from New York City to the tiny upstate town of Hibernia, they’re in desperate need of a change: their careers have flatlined, the city is exhausting, and they’ve reached a relationship stalemate. So Hannah accepts a job as live-in director of the Wright Historic House, a museum dedicated to an obscure nineteenth-century philosopher whose life was marred by tragedy.

At first, life in this old, creaky house feels cozy. Nick and Hannah explore the deserted museum at night, wandering the twisting halls and sneakily trying out the former owners’ original master bed. But as summer turns to fall, Hannah begins to have trouble sleeping; reluctantly, she tells Nick she’s hearing whispers in the night. Then one morning, Nick wakes up to find Hannah gone. In his frantic search for her, Nick will discover the hidden legacy of Wright House: a man driven wild with grief, and a spirit aching for home.

A screenwriter, his wife, and their four-year old daughter rent a house in the mountains of Germany, but something isn’t right. As he toils on a sequel to his most successful movie, the screenwriter notices that rooms aren’t where he remembers them—and finds in his notebook words that are not his own.

The Supernatural Enhancements by Edgar Cantero

Months after the last of the Wells sons jumped out of his bedroom window in Axton House, a strange couple of Europeans arrive in Virginia to take possession of the estate. A. is the twenty-three-year-old unforeseen scion; Niamh is the mute punk teen girl he refers to as his associate or his bodyguard. Both are ready to settle into their new cushy lifestyle, and the rumors about the mansion being haunted add to their excitement. But ghosts are not in any way the deepest secret of the house.

The Shining by Stephen King

Jack Torrance’s new job at the Overlook Hotel is the perfect chance for a fresh start. As the off-season caretaker at the atmospheric old hotel, he’ll have plenty of time to spend reconnecting with his family and working on his writing. But as the harsh winter weather sets in, the idyllic location feels ever more remote . . . and more sinister. And the only one to notice the strange and terrible forces gathering around the Overlook is Danny Torrance, a uniquely gifted five-year-old.