A Look Behind the Scenes of Station Eleven with Emily St. John Mandel 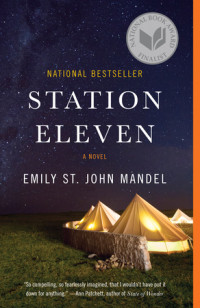 Emily St. John Mandel’s stunningly beautiful vision of the eerie days of civilization’s collapse captured the imagination of many readers, ourselves included. There are lines and moments from the book that have stuck with us long after we finished reading the last page. That’s why we’re so excited that Emily annotated some of the book’s most fascinating lines with behind-the-scenes stories on Goodreads.  Whether you’re waiting anxiously for Emily’s new book, The Glass Hotel, or looking for something to bridge the gap before the Station Eleven series begins airing on HBOMax, these notes highlight what makes Station Eleven so special. Here’s a peek at the annotations:

“Of all of them there at the bar that night, the bartender was the one who survived the longest. He died three weeks later on the road out of the city.”

Note from Emily St. John Mandel: When I wrote this passage, what I wanted was for readers to be, like, “Wait, WHAT?” and then hopefully find themselves unable to put the book down. I have no formal training as a writer, which is another way of saying that I learned everything I know about writing by reading other peoples’ books. For me, one of the most important books in this regard has been Dan Chaon’s 2011 novel Await Your Reply. It opens with a young man being driven to the hospital, his severed hand in a cooler full of ice. (I know!) Something I took away from that is how effective it can be to insert a horrible detail that raises enormous questions into an early chapter of a book: a severed hand, say, or the casual declaration that everyone in the room will be dead in three weeks.

“All three caravans of the Traveling Symphony are labeled as such, THE TRAVELING SYMPHONY lettered in white on both sides, but the lead caravan carries an additional line of text: Because survival is insufficient.”

Note from Emily St. John Mandel: “Survival is insufficient” is a line that I heard twenty years ago in an episode of Star Trek, and it stayed with me forever. It just struck me as an elegant expression of something that I believe to be true. You don’t have to look to a fictional future to find that phenomenon—as a species, we do things like put on plays in war zones and play musical instruments in refugee camps. You could look at such activities as a waste of time and resources in desperate times, or you could look at it as the thing we do that reminds us that we’re human.