A Conversation with Laila Lalami 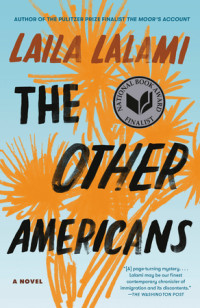 If you’re searching for your next book club pick, The Other Americans is a gripping drama that’s ripe for discussion! Filled with complex characters, fraught family tension, a murder mystery, and a love story, this National Book Award finalist examines a range of perspectives worthy of consideration.

We’re delighted to share more of Laila Lalami’s thoughts on a work of hers that is beautiful, heartbreaking, and of the moment. Enjoy this Q&A with the author!

What is The Other Americans about?

It’s about a family grieving the loss of their father, but on a larger scale it’s a story about home. The novel begins on a quiet spring night in a small town in California, when a Moroccan immigrant is killed in a hit-and-run. In the aftermath, different characters connected to the victim—his daughter, his widow, a witness to the crime, a police investigator, a war veteran, a neighbor—take turns narrating what happened. As they tell their stories, unexpected links between them emerge: they each have a yearning for home, whether it’s because they’ve left it behind or they’ve been uprooted from it; they have secrets that fill them with guilt; they have to navigate the complexities of morality and responsibility in the face of violent crime. At the same time, however, they’re divided by markers like race or class, which amplify their reactions to the event. I guess you could say it also offers up a portrait of America.

What inspired the story?

A few years ago, I was on vacation in Jackson Hole, Wyoming, when I got a text in the middle of the night telling me that my father was in the hospital, that he was about to die. This is every immigrant’s nightmare: the fear that you will be thousands of miles away from loved ones when they need you most. I flew to Morocco to be with my dad, who recovered after a few weeks, thankfully, and is in good health now. But the scare so unsettled me that I started writing a story about a woman grieving the unexpected death of her father. I thought it would make for an intriguing context to the story, something I could explore more fully in fiction than in nonfiction.

How has being an immigrant influenced your work?

All kinds of experiences influence my work—my personal relationships, my reading, my travels, even my conversations with strangers. Being an immigrant has played a huge part in shaping who I am and, therefore, what I write. I often look at things from two different perspectives, as insider and as outsider. I’m endlessly fascinated by the idea of home—why we leave it, how we make it, how we narrate the journey, the yearning that it creates in us, etc. Having said all this, I also want to add that migration is one of the biggest themes in literature. The oldest stories we tell are stories of exile, crossing borders, seeking safe haven, etc. And the stranger is an archetypal character in fiction as well. So that part isn’t new. It’s only that the storytellers are new.

Why did you set the novel in California?

My last book, The Moor’s Account, was a historical novel set in Florida, and I wanted to do something completely different with this one. I’ve lived here nearly half my life, so I thought it was time to write about it! California has more immigrants than any other state in the country, though popular depictions of it tend to leave them out. It’s not unusual for a movie or television series set in Los Angeles, for example, to have no immigrant or Hispanic characters at all. The other common misconception about California is that immigrants are concentrated in urban areas, but there are immigrants in many rural areas as well. I decided to set the story in the high desert because it’s a landscape I know and love, and also because I wanted to have a small town where an event like a hit-and-run can have rippling consequences.

You said earlier that all the characters in The Other Americans have a troubled relationship with home. Can you elaborate on that?

Sure. The main character is Nora Guerraoui, who was born in this tiny desert town near Joshua Tree, but never really felt at home in it, so she left the first chance she got. Now she’s a composer, but she’s struggling to make a name for herself in the Bay Area. As the novel opens, she finds out that her father has been killed, and she has to return home. Her mother, Maryam, was born in Morocco and emigrated to the United States in 1981, following the popular protests that took place that year. But over the years, she starts to feel regret over her decision and she yearns to go back, which creates conflict with her husband, Driss. Then there’s Efraín, a father of two who witnesses the hit-and-run, but is afraid to come forward because he’s undocumented. It’s a huge ethical dilemma for him: he has to choose between doing the right thing or keeping himself (and his family) safe. Even Coleman, the police investigator who’s assigned to the case, is new to the town, having relocated from Washington, D.C. It’s a big move for her family and they’re having some difficulty settling into such a little town.

The novel opens with Nora finding out that Driss has been killed. Why did you choose to have chapters from his point of view?

It happened organically, and it didn’t stand out to me as a choice until my agent read it and pointed it out. I think I wanted to include his voice because the mystery of what happened to him is what propels the story forward, and also frankly because it was fun for me as a writer. He interrupts the narrative whenever he wants to correct what others have said about him or argue with their characterization of him, and that argument between him and the record of him that’s being created by others was too hard to resist.

What kind of research did you do for this book?

I like to learn as much as I can about my characters’ occupations and histories when I write. For example, I spoke to people who witnessed the protests of 1981 in Casablanca and interviewed Moroccan immigrants who moved to the U.S. about their early experiences. I talked to a former prosecutor in the D.A.’s office in Los Angeles, learned about police procedures and investigations, and went on a ride-along with a sheriff’s deputy in San Bernardino County. I remember the officer was dispatched to talk to an employee at the water company, who had noticed that someone had messed with the meter and was stealing water from the main line. When we pulled up to the address where the water was being used, we found an immense and illegal pot grow—in the middle of the desert. The lesson here is, if you’re going to do something illegal, it’s better not to steal water to do it. I also read fiction and nonfiction on grief and recovery, military deployment and moral injury among veterans, and the immigrant experience in the United States. Basically, I tried to get as much context as I could about each character in order to more fully inhabit the voice I was using.

What are some literary influences on the book?

Polyphonic novels are notoriously difficult to execute: the writer must not only alternate between multiple points of view, presenting events from different perspectives, but also preserve the idiosyncrasies of individual voices and the integrity of their private concerns. The best books in this genre—William Faulkner’s As I Lay Dying, for example—manage to do all this while also exploiting gaps in the narrative to move the plot forward. The form is particularly suited for telling the story of an entire community, which is why I settled on it for The Other Americans. I worked on this project for four and a half years, experimenting with different characters, voices, and styles. This book was a joy to write for many reasons, not least of which the fact that it helped me develop further as a writer.  Once I decided to use multiple narrators, I had to set up timelines for each one of them, which I then broke up into the chapters you see in the book. Then I experimented with the order, moving each piece about until I felt I had achieved the effect of a puzzle coming together.

What are you working on now?

I’m working on a book of nonfiction, Conditional Citizens, about how the relationship between an individual and the state is undermined by race, religion, and gender. It’s coming out with Pantheon as well.

This interview was originally published on LailaLalami.com. The author has given permission to share on the Reading Group Center.