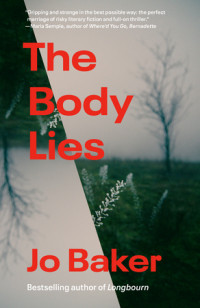 Sometimes, the best kind of suspense novels are the ones that build slowly, making your spine tingle irresistibly until the plot reaches its beautiful, unexpected climax. That’s what we love about this list. These seven thrillers may not leave you turning pages at breakneck speed, but they will take you to levels of depth and mystery that will leave you astounded. If you love a chilling suspense that lingers in literary sensibility, this collection is for you!

To headline this list, we have The Body Lies, the thrilling new novel from the bestselling author of Longbourn.

The Body Lies by Jo Baker

“Gripping and strange in the best possible way: the perfect marriage of risky literary fiction and full-on thriller.” —Maria Semple, author of Where’d You Go, Bernadette

This mesmerizing work of psychological suspense is about a young writer who accepts a job at a university in the remote English countryside. What’s meant to be a fresh start after a traumatic sexual assault quickly becomes a troubling ordeal with students and coworkers whose secrets are closeted within the university’s walls or buried within the rural landscape. At once an exploration of the subtle violence against women and a layered interrogation of the fetishization of the female body, this nail-biting mystery will leave you checking the locks on your doors.

The Water Cure by Sophie Mackintosh

Dubbed “a gripping, sinister fable” by Margaret Atwood, this haunting, riveting debut is a fiercely poetic feminist revenge fantasy that’s a startling reflection of our time. In order to fortify them from the spreading toxicity of a degrading world, King tenderly stakes out a territory for his wife and three daughters on his island where they endure cult-like rituals and therapies. But when King disappears and two men and a boy wash ashore, the sisters’ safe world begins to unravel. Over the span of one blistering hot week, a psychological cat-and-mouse game plays out.

In this masterful, disquieting novel, an exiled poet named Ka returns to Turkey and travels to the forlorn city of Kars. His ostensible purpose is to report on a wave of suicides among religious girls forbidden to wear their head-scarves. But Ka is also drawn by his memories of the radiant Ipek, recently divorced. Amid blanketing snowfall and universal suspicion, Ka finds himself pursued by figures ranging from Ipek’s ex-husband to a charismatic terrorist. In a theatrical evening that climaxes in a massacre, Ka realizes that finding God may be the prelude to losing everything else.

A dark, propulsive, and addictive debut thriller, splashed with all the glitz and glitter of New York City, this book is about the intimate, intense, and possibly toxic friendship between Louise and Lavinia. Louise has nothing. Lavinia has everything. Together, they dream about all of the places they will go together, not realizing that Lavinia will never go. This seductive story takes a classic tale of obsession and makes it irresistibly new.

On the haunting and isolated island of San Piedro, north of Puget Sound, a local fisherman is found suspiciously drowned, and a Japanese American named Kabuo Miyamoto is charged with his murder. In the course of the ensuing trial, it becomes clear that what is at stake is more than a man’s guilt. Gripping, tragic, and densely atmospheric, Snow Falling on Cedars is a masterpiece of suspense—one that leaves us shaken and changed.

The Blind Assassin by Margaret Atwood

The #1 New York Times bestselling author of The Handmaid’s Tale delivers a story that weaves together strands of gothic suspense, romance, and science fiction into one utterly spellbinding narrative. After the mysterious death—a possible suicide—of a young woman named Laura Chase in 1945, Laura’s sister Iris recounts, decades later, her memories of their childhood, and of the dramatic deaths that have punctuated their wealthy, eccentric family’s history. These richly layered stories-within-stories gradually illuminate the secrets that have long haunted the Chase family, coming together in a brilliant and astonishing final twist.

When a New York City couple decides to move upstate for a much needed break from the city, they settle into a cozy new life of a creaky, old house and a job at the Wright Historic Museum. But soon Hannah begins to have trouble sleeping, and she eventually confides to Nick that she is hearing whispers in the night. Then one morning, Nick wakes up to find Hannah gone. In his frantic search for her, Nick will discover the hidden legacy of the Wright House: a man driven wild with grief, and a spirit aching for home.