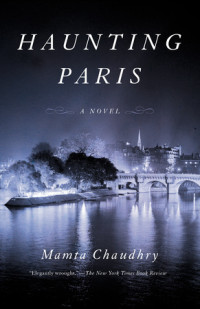 As travel isn’t an option for many of us right now, books are more necessary than ever to take us to the faraway places we long for. In case anyone is in need of an armchair adventure, we recommend the following timeless and powerful stories set in France during World War II. These six novels are sure to transport lovers of literary and historical fiction through time and space into the thrilling experiences that can only happen between the pages of a book.

Now available in paperback we have Haunting Paris, a timeless story of love and loss.  In Paris, in 1989, Sylvie discovers a mysterious letter among her late lover Julien’s possessions, launching her into a decades-old search for a child who vanished in the turbulence of the Second World War. Drawn in by the power of his love for her, Julien’s ghost watches over Sylvie as she discovers secrets from his past, shedding new light on the dark days of Nazi-occupied Paris. Haunting Paris matches emotional intensity with lyrical storytelling to explore grief, family secrets, and the undeniable power of memory.

This is the remarkable story of men and women thrown together in circumstances beyond their control. As Parisians flee the city on the eve of the Nazi occupation in 1940, human folly surfaces in every imaginable way. And in a provincial village now occupied by German soldiers, the locals must learn to coexist with the enemy—in their town, their homes, even in their hearts.

Irène Némirovsky was already a highly successful writer living in Paris when she began working on Suite Française. But she was also a Jew, and in 1942 she was arrested and deported to Auschwitz, where she died. For sixty-four years, this novel remained hidden and unknown.

Set in Paris in 1937, a Hungarian-Jewish architecture student arrives from Budapest with a scholarship, a single suitcase, and a mysterious letter he promised to deliver. But when he falls into a complicated relationship with the letter’s recipient, he becomes privy to a secret that will alter the course of his—and his family’s—history. From the small Hungarian town of Konyár to the grand opera houses of Budapest and Paris, The Invisible Bridge tells the story of a family shattered and remade in history’s darkest hour.

The Flight Portfolio by Julie Orringer

Varian Fry, a Harvard-educated journalist and editor, arrives in Marseille, France, in 1940. As darkness descends over Europe, he and a group of like-minded New Yorkers help artists and writers escape from the Nazis and immigrate to the United States. Now, amid the chaos of World War II, and in defiance of restrictive U.S. immigration policies, Fry must procure false passports, secure visas, seek out escape routes, and make impossible decisions about who should be saved, all while under profound pressure. In this dazzling work of historical fiction, Julie Orringer has crafted a gripping tale of forbidden love, high-stakes adventure, and unimaginable courage.

Nancy Wake is an intrepid Australian expat living in Paris in 1936 who has bluffed her way into a reporting job for Hearst newspaper when she meets the wealthy French industrialist Henri Fiocca. No sooner does Henri sweep Nancy off her feet and convince her to become Mrs. Fiocca than the Germans invade France and she takes yet another name: a code name. Based on the thrilling real-life story of a socialite spy, Code Name Hélène is a spellbinding and moving story of enduring love, remarkable sacrifice and unfaltering resolve that chronicles the true exploits of a woman who deserves to be a household name.

April in Paris by Michael Wallner

Written in an elegant and arresting style, April in Paris recounts the impossible love affair between a German soldier and a French resistance fighter. One day while off-duty, Roth, a young soldier in the SS and a fluent French translator, is drawn into an antiquarian bookshop and becomes enchanted with the bookseller’s beautiful daughter, Chantal. The two begin to meet and fall in love before Roth has the courage to reveal his true identity, or the time to discover that Chantal is part of the Resistance.