Colson Whitehead on the True Story Behind The Nickel Boys 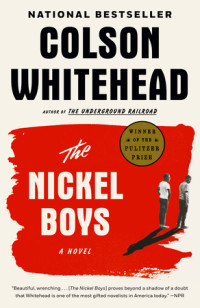 Following the publication of his Pulitzer Prize and National Book Award–winning novel The Underground Railroad, Colson Whitehead skyrocketed to the top of the literary world. Expectations were high for his next book, The Nickel Boys, and readers have been thrilled to discover that it delivers. It even won Colson his second Pulitzer Prize for Fiction!

The Nickel Boys tells the story of Elwood and Turner, two young black boys who are sentenced to a juvenile reformatory called the Nickel Academy. The school turns out to be a chamber of horrors where the children face appalling abuse. Even more devastating is the fact that the Nickel Academy is based on the real story of a reform school in Florida that operated for more than a century and scarred the lives of thousands of children. Its terrible legacy echoes through the lives of victims’ families to this day.

When the book first came out in hardcover, Colson sat down for an interview with NPR, which you can hear below. Now that The Nickel Boys is available in paperback, it’s worth giving it a listen (or a relisten!) so that you and your reading group can learn more about the chilling historical background that gave rise to this incredible novel.