A Guide to the Brilliant Works by Dr. Oliver Sacks 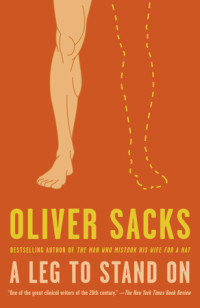 Fans from across the globe have adored Dr. Oliver Sacks for decades. Regarded as “the poet laureate of medicine” by The New York Times, he is fondly remembered for his groundbreaking research as well as his deeply personal memoirs. His warm and honest voice has charmed countless readers. Now five years after his passing, Vintage Books is reissuing one of his most classic and intimate works. Originally published in 1984, A Leg to Stand On is now available in an expanded edition with a new foreword, written by Kate Edgar, executive director of the Oliver Sacks Foundation. In honor of this new edition, we are taking a look back at some of Dr. Sacks’s most fascinating and important books.

A Leg to Stand On

“In calling for a ‘neurology of the soul’ and a ‘deeper and more humane medicine,’ Sacks’s remarkable book raises issues of profound importance for everyone interested in health care and the humane application of science.”—The Washington Post

Dr. Oliver Sacks’s books have been acclaimed for their extraordinary compassion in the treatment of patients affected with profound disorders. In A Leg to Stand On, it is Sacks himself who is the patient: an encounter with a bull on a desolate mountain in Norway has left him with a severely damaged leg. But what should be a routine recuperation is actually the beginning of a strange medical journey when he finds that his leg uncannily no longer feels like part of his body. Sacks’s brilliant description of his crisis and eventual recovery is not only an illuminating examination of the experience of patienthood and the inner nature of illness and health but also a fascinating exploration of the physical basis of identity.

“Oliver Sacks’s commentary is so erudite, so gracefully written, that even those people fortunate enough never to have had a migraine in their lives should find it equally compelling.”—The New York Times

Oliver Sacks’s first book was published fifty years ago in 1970, and later revised and republished in 1999. On this special anniversary, we have revisited his first work, and it’s more relevant now than ever. The many manifestations of migraine can vary dramatically from one patient to another, even within the same patient at different times. Among the most compelling and perplexing of these symptoms are the strange visual hallucinations and distortions of space, time, and body image which migraineurs sometimes experience. Portrayals of these uncanny states have found their way into many works of art, from the heavenly visions of Hildegard von Bingen to Alice in Wonderland. Dr. Oliver Sacks argues that migraine cannot be understood simply as an illness, but must be viewed as a complex condition with a unique role to play in each individual’s life.

The inspiration for the major motion picture, Awakenings is the remarkable story of a group of patients who contracted sleeping-sickness during the great epidemic just after World War I. Frozen for decades in a trance-like state, these men and women were given up as hopeless until 1969, when Dr. Oliver Sacks gave them the then-new drug L-DOPA, which had an astonishing, explosive, “awakening” effect. Dr. Sacks recounts the moving case histories of his patients, their lives, and the extraordinary transformations which went with their reintroduction to a changed world.

In this provocative meditation on communication, biology, adaptation, and culture, Oliver Sacks turns his attention to the subject of deafness. The result is a deeply felt portrait of a minority struggling for recognition and respect—a minority with its own rich, sometimes astonishing, culture and unique visual language, an extraordinary mode of communication that tells us much about the basis of language in hearing people as well. Seeing Voices is, as Studs Terkel has written, “an exquisite, as well as revelatory, work.”

An Anthropologist on Mars

“A multi-faceted masterpiece . . .a joy to read. . . .Sacks invites hope where hope has been proscribed, an act that by itself makes this book priceless.” —Chicago Tribune

Dr. Sacks brings a sense of humanity, poetic observation, and infectious sense of wonder to these seven narratives of neurological disorder. The men, women, and one extraordinary child featured in these stories emerge as brilliantly adaptive personalities, whose conditions have not so much debilitated them as ushered them into another reality.

The Island of the Colorblind

“An explorer of that most wondrous of islands, the human brain,” writes D. M. Thomas in The New York Times Book Review, “Oliver Sacks also loves the oceanic kind of islands.” Both kinds figure movingly in this book—part travelogue, part autobiography, part medical mystery story—in which Sacks’s journeys to a tiny Pacific atoll and the island of Guam become explorations of the meaning of islands, the genesis of disease, the wonders of botany, the nature of deep geological time, and the complexities of being human.

Long before Oliver Sacks became a distinguished neurologist and bestselling writer, he was a small English boy fascinated by metals—also by chemical reactions (the louder and smellier the better), photography, squids and cuttlefish, H.G. Wells, and the periodic table. In this endlessly charming and eloquent memoir, Sacks chronicles his love affair with science and the magnificently odd and sometimes harrowing childhood in which that love affair unfolded. Uncle Tungsten is a crystalline view of a brilliant young mind springing to life, a story of growing up which is by turns elegiac, comic, and wistful, full of the electrifying joy of discovery.

Since childhood, Oliver Sacks has been fascinated by ferns: an ancient class of plants able to survive and adapt in many climates. Along with a delightful group of fellow fern aficionados—mathematicians, poets, artists, and assorted botanists and birders—he embarks on an exploration of Southern Mexico, a region that is also rich in human history and culture. He muses on the origins of chocolate and mescal, pre-Columbian culture and hallucinogens, the vibrant sights and sounds of the marketplace, and the peculiar passions of botanists. What other species would comb ancient Zapotec ruins on their hands and knees, searching for a new type of fern? Combining Sacks’s enthusiasm for natural history and the richness of humanity with his sharp and observant eye for detail, Oaxaca Journal is a rare treat.

“Sacks once again examines the many mysteries of a fascinating subject.”— The Seattle Times

With the same trademark compassion and erudition, Oliver Sacks explores the place music occupies in the brain and how it affects the human condition. In Musicophilia, he shows us a variety of what he calls “musical misalignments.” Among them: a man struck by lightning who suddenly desires to become a pianist at the age of forty-two; an entire group of children with Williams syndrome, who are hypermusical from birth; people with “amusia,” to whom a symphony sounds like the clattering of pots and pans; and a man whose memory spans only seven seconds-for everything but music. Illuminating, inspiring, and utterly unforgettable, Musicophilia is Oliver Sacks’ latest masterpiece.

“Remarkably graceful . . . Sacks would seem to be the ideal doctor: observant but accepting, thorough but tender, training his full attention on one patient at a time.” —The The New York Times Book Review

With compassion and insight, Dr. Oliver Sacks again illuminates the mysteries of the brain by introducing us to some remarkable characters, including Pat, who remains a vivacious communicator despite the stroke that deprives her of speech, and Howard, a novelist who loses the ability to read. Sacks investigates those who can see perfectly well but are unable to recognize faces, even those of their own children. He describes totally blind people who navigate by touch and smell; and others who, ironically, become hyper-visual. Finally, he recounts his own battle with an eye tumor and the strange visual symptoms it caused. As he has done in classics like The Man Who Mistook his Wife for a Hat and Awakenings, Dr. Sacks shows us that medicine is both an art and a science, and that our ability to imagine what it is to see with another person’s mind is what makes us truly human.

“Elegant. . . . An absorbing plunge into a mystery of the mind.” — Entertainment Weekly

To many people, hallucinations imply madness, but in fact they are a common part of the human experience. These sensory distortions range from the shimmering zigzags of a visual migraine to powerful visions brought on by fever, injuries, drugs, sensory deprivation, exhaustion, or even grief. Hallucinations doubtless lie behind many mythological traditions, literary inventions, and religious epiphanies. Drawing on his own experiences, a wealth of clinical cases from among his patients, and famous historical examples ranging from Dostoevsky to Lewis Carroll, the legendary neurologist Oliver Sacks investigates the mystery of these sensory deceptions: what they say about the working of our brains, how they have influenced our folklore and culture, and why the potential for hallucination is present in us all.

The River of Consciousness

“Reveals Sacks as a gleeful polymath and an inveterate seeker of meaning in the mold of Darwin and his other scientific heroes Sigmund Freud and William James. . . . As this volume reminds us, in losing Sacks we lost a gifted and generous storyteller.” — The Wall Street Journal

Oliver Sacks, scientist and storyteller, is beloved by readers for the extraordinary neurological case histories, but he was also a memoirist who wrote with honesty and humor about the remarkable experiences that shaped him. In the pieces that comprise The River of Consciousness, Dr. Sacks takes on evolution, botany, chemistry, medicine, neuroscience, and the arts, and calls upon his great scientific and creative heroes—above all, Darwin, Freud, and William James. For Sacks, these thinkers were constant companions from an early age. The questions they explored—the meaning of evolution, the roots of creativity, and the nature of consciousness—lie at the heart of science and of this book. The River of Consciousness demonstrates Sacks’s unparalleled ability to make unexpected connections, his sheer joy in knowledge, and his unceasing, timeless endeavor to understand what makes us human.

Everything in Its Place

“Magical . . . [Everything in Its Place] showcases the neurologist’s infinitely curious mind.”— —People Magazine

This final volume of essays that showcase Sacks’s broad range of interests—from his passion for ferns, swimming, and horsetails, to his final case histories exploring schizophrenia, dementia, and Alzheimer’s. Oliver Sacks, scientist and storyteller, is beloved by readers for his neurological case histories and his fascination and familiarity with human behavior at its most unexpected and unfamiliar. Everything in Its Place is a celebration of Sacks’s myriad interests, told with his characteristic compassion and erudition, and in his luminous prose.