Our Favorite Thrillers for Halloween 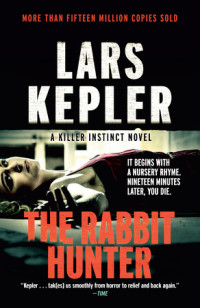 All Hallows’ Eve is upon us, and what better way to observe this ominous holiday than with a scary story and a blanket pulled up to your nose. From psychological thrillers to occult fiction, here are writers from all over the world dispensing their universal delights of suspense. Bursting with ghosts, gore, and shadows of the supernatural, be sure to add one (or more) of these spine-tingling reads to your nightstand this Halloween. And be careful—these books might keep you up all night with a flashlight beside your bed. You’ve been warned!

The Rabbit Hunter by Lars Kepler

A masked stranger stands in the shadows. He watches his victim through the window. He will kill him slowly—make him pay. Soon the Rabbit Hunter has claimed another three victims. This predator will stop at nothing to reap his ultimate revenge. It’s up to Joona Linna and Saga Bauer to untangle one of the most complex cases of their career, and follow the killer’s trail of destruction back to one horrific night of violence.

The Silence of the White City by Eva Garcia Sáenz

Inspector Unai López de Ayala, known as “Kraken,” is charged with investigating a series of ritualistic murders. The killings are eerily similar to ones that terrorized the citizens of Vitoria twenty years earlier. But back then, police were sure they had discovered the killer, a prestigious archaeologist who is currently in jail. Now Kraken must race to determine whether the killer had an accomplice or if the wrong man has been incarcerated for two decades. This fast-paced, unrelenting thriller weaves in and out of the mythology and legends of the Basque country as it hurtles to its shocking conclusion.

In 1977, four teenagers and a dog solved the mystery of Sleepy Lake. Now, in 1990, the twenty-something former teen detectives are lost souls. Plagued by night terrors and a tragic death, the three survivors have been running from their demons. When the man they apprehended all those years ago makes parole, the gang reunites and returns to Blyton Hills to find out what really happened in 1977.

The Big Book of Ghost Stories edited by Otto Penzler

The ghost story is perhaps the oldest of all the supernatural literary genres and has captured the imagination of almost every writer to put pen to the page. Here, Edgar Award–winning editor Otto Penzler has followed his keen sense of the supernatural to collect the most chilling and uncanny tales in the canon. Whether you prefer possessive poltergeists, awful apparitions, or friendly phantoms, these stories are guaranteed to thrill you, tingle the spine, or tickle the funny bone, and keep you turning the pages with fearful delight.

My Sister, the Serial Killer by Oyinkan Braithwaite

Korede’s sister Ayoola is many things: the favorite child, the beautiful one, possibly sociopathic. And now Ayoola’s third boyfriend in a row is dead, stabbed through the heart with Ayoola’s knife. Korede’s practicality is the sisters’ saving grace. She knows the best solutions for cleaning blood (bleach, bleach, and more bleach), the best way to move a body (wrap it in sheets like a mummy), and she keeps Ayoola from posting pictures to Instagram when she should be mourning her “missing” boyfriend. Korede has long been in love with a kind, handsome doctor at the hospital where she works, but when he asks Korede for Ayoola’s phone number, she must reckon with what her sister has become and how far she’s willing to go to protect her.

The Second Sleep by Robert Harris

When a local parson of a remote village dies under mysterious circumstances, Christopher Fairfax, a young English priest, is dispatched on horseback from the cathedral city to conduct his burial. But when he arrives in this distant hamlet, haunting questions arise. Why did the parson possess heretical texts? How did he come to own banned ancient relics? Did these possessions lead to his death? Until this moment, Fairfax has never known doubt. His faith in the Church and its teachings has always been unquestioning. But over the next six days, everything he believes and everything we believe—about his faith and the very history of the world—will be tested.

King’s first collection of short stories showcases the darkest depths of his brilliant imagination. Here we see mutated rats gone bad (“Graveyard Shift”); a cataclysmic virus that threatens humanity (“Night Surf,” the basis for The Stand); a possessed, evil lawnmower (“The Lawnmower Man”); unsettling children from the heartland (“Children of the Corn”); a smoker who will try anything to stop (“Quitters, Inc.”); a reclusive alcoholic who begins a gruesome transformation (“Gray Matter”); and many more shadows and visions that will haunt you long after the last page is turned.

The Body Lies by Jo Baker

When a young writer accepts a job at a university in the remote English countryside, it’s meant to be a fresh start, away from the bustle of London and the scene of a violent assault she is desperate to forget. But despite the distractions of her new life and the demands of single motherhood, her nerves continue to jangle. When a troubled student starts turning in chapters that blur the lines between fiction and reality, the professor recognizes herself as the main character in his book—and he has written her a horrific fate. Will she be able to stop life imitating art before it’s too late?

Brilliant, audaciously rogue police officer Harry Hole from The Snowman and The Thirst is back and in the throes of a new, unanticipated rage–once again hunting the murderer who has haunted his entire career. When given a chance for a new start with the Oslo Police in the cold case office, Harry really wants to be investigating cases he suspects have ties to Svein Finne, the serial rapist and murderer who Harry helped put behind bars. And now, Finne is free after a decade-plus in prison and, Harry is certain, ready to take up where he left off. But when Harry wakes up the morning after a drunken night with blood that’s clearly not his own on his hands, it’s only the very beginning of what will be a waking nightmare.