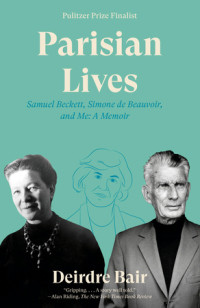 Today, we’re shining the spotlight on women! Strong, resilient, tender, and utterly captivating, these biographies and autobiographies capture astonishing portraits of writers, poets, Supreme Court justices, a grad student turned CIA agent, and a nun turned activist. The lives of these women are truly remarkable, and we can’t think of a better way to honor their legacies than by reading their stories. Authored by women, these unique and praiseworthy narratives are great picks for any book club interested in celebrating the powerful, beautiful existence of women.

National Book Award–winning biographer Deirdre Bair explores her fifteen remarkable years in Paris with Samuel Beckett and Simone de Beauvoir, painting intimate new portraits of two literary giants and revealing secrets of the biographical arts. Drawing on Bair’s extensive notes and never-before-told anecdotes, this gripping memoir is full of personality and warmth and gives us an entirely new window on the all-too-human side of these legendary thinkers.

“Sparkling. . . . Bair spent seven years on Beckett and ten on Beauvoir, and her dedication to her subjects is apparent.” —The New Yorker

Amaryllis Fox was in her last year as an undergraduate at Oxford studying theology and international law when her writing mentor Daniel Pearl was captured and beheaded. Galvanized by this brutality, Fox applied to a master’s program in conflict and terrorism at Georgetown’s School of Foreign Service, where she created an algorithm that predicted the likelihood of a terrorist cell arising in any village around the world. At twenty-one, she was recruited by the CIA. Life Undercover is exhilarating, intimate, fiercely intelligent—an impossible to put down record of an extraordinary life, and of Amaryllis Fox’s astonishing courage and passion.

In this comprehensive, revelatory biography—fifteen years of interviews and research in the making—historian Jane Sherron De Hart explores the central experiences that crucially shaped Ruth Bader Ginsburg’s passion for justice, her advocacy for gender equality, and her meticulous jurisprudence. Revised and updated with a new afterword, this intimate and personably told biography offers unprecedented insight into a pioneering life and legal career whose profound mark on American jurisprudence, American society, and our American character and spirit will reverberate deep into the twenty-first century and beyond.

On October 15, 1838, the body of a thirty-six-year-old woman was found in Cape Coast Castle, West Africa, a bottle of Prussic acid in her hand. She was one of the most famous English poets of her day: Letitia Elizabeth Landon, known as L.E.L. What was she doing in Africa? Was her death an accident, as the inquest claimed? Or had she committed suicide, or even been murdered? To her contemporaries, she was an icon, hailed as the “female Byron,” admired by Elizabeth Barrett Browning, the Brontës, and Edgar Allan Poe. However, she was also a woman with scandalous secrets, and her death prompted a cover-up that is only now unravelling. Lucasta Miller, acclaimed author of The Brontë Myth, meticulously pieces together L.E.L.’s lost career, revealing her as a brilliant woman who embodied a seismic cultural shift, the missing link between the Romantics and the Victorians.

“Compelling as a detective story. . . . A masterpiece of eloquent scholarship.” —Literary Review

River of Fire by Helen Prejean

Sister Helen Prejean’s work as an activist nun, campaigning to educate Americans about the inhumanity of the death penalty, is known to millions worldwide. Less widely known is the evolution of her spiritual journey from praying for God to solve the world’s problems to engaging full-tilt in working to transform societal injustices. River of Fire is a book for anyone interested in journeys of faith and spirituality, doubt and belief, and “catching on fire” to purpose and passion. It is a book written in accessible, luminous prose about how to live a spiritual life that is wide-awake to the sufferings and creative opportunities of our world.

“Prejean chronicles the compelling, sometimes-difficult journey to the heart of her soul and faith with wit, honesty, and intelligence. A refreshingly intimate memoir of a life in faith.” —Kirkus Reviews

This highly anticipated new biography of Sylvia Plath focuses on her remarkable literary and intellectual achievements, while restoring the woman behind the long-held myths about her life and art. With a wealth of never-before-accessed materials—including unpublished letters and manuscripts; court, police, and psychiatric records; and new interviews—Heather Clark brings to life the brilliant daughter of Wellesley, Massachusetts. Along with illuminating readings of the poems themselves, Clark’s meticulous, compassionate research brings us closer than ever to the spirited woman and visionary artist who blazed a trail that still lights the way for women poets the world over.

“Finally, the biography that Sylvia Plath deserves. . . . A spectacular achievement.” —Ruth Franklin, author of Shirley Jackson: A Rather Haunted Life

In this story of human triumph that “hums with hope and exhilaration” (NPR), the first Hispanic and third woman appointed to the United States Supreme Court, Sonia Sotomayor, recounts her life from a Bronx housing project to the federal bench, a journey that offers an inspiring testament to her own extraordinary determination and the power of believing in oneself. Through her still-astonished eyes, America’s infinite possibilities are envisioned anew in this warm and honest book.

“A compelling and powerfully written memoir about identity and coming of age..” —Michiko Kakutani, The New York Times

In her award-winning book The Woman Warrior, Maxine Hong Kingston created an entirely new form—an exhilarating blend of autobiography and mythology, of world and self, of hot rage and cool analysis. First published in 1976, it has become a classic in its innovative portrayal of multiple and intersecting identities—immigrant, female, Chinese, American.

“Remarkable. . . . As an account of growing up female and Chinese-American . . . it is anti-nostalgic. . . . As a dream—of the ‘female avenger’—it is dizzying, elemental, a poem turned into a sword.” —The New York Times

All God’s Children Need Traveling Shoes is her lyrical and acutely perceptive exploration of what it means to be an African American on the mother continent, where color no longer matters but where American-ness keeps asserting itself in ways both puzzling and heartbreaking. As it builds on the personal narrative of I Know Why the Caged Bird Sings and Gather Together in My Name, this book confirms Maya Angelou’s stature as one of the most gifted autobiographers of our time.

“This is a superb account by a great woman who has embraced a difficult destiny with rare intelligence and infectious joie de vivre.” —The Boston Globe