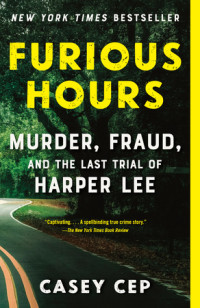 This list might seem a little familiar to some of you Reading Group Center regulars! Our first collection of “The Best Nonfiction for People Who Don’t Read Nonfiction” was so popular that we decided to follow it up with a Part II! From stories of rollicking jungle explorations and clandestine ops to more somber accounts of mental illness and finding one’s identity, these books illustrate the full breadth of topics that great nonfiction can cover.

Furious Hours masterfully brings together the tales of a serial killer in 1970s Alabama and of Harper Lee, the beloved author of To Kill a Mockingbird, who tried to write his story.

Amaryllis Fox’s riveting memoir tells the story of her ten years in the most elite clandestine ops unit of the CIA, hunting the world’s most dangerous terrorists in sixteen countries while marrying and giving birth to a daughter.

“A riveting true story of an American family that reads like a medical detective journey and sheds light on a topic so many of us face: mental illness.” —Oprah Winfrey

Finding Latinx by by Paola Ramos

“A journey towards the long-overdue representation of Latinx people through the term ‘Latinx,’ inspiring a collective sense of identify and solidarity.” —Marie Claire

In this empowering cross-country travelogue, journalist and activist Paola Ramos embarks on a journey to find the communities of people defining the controversial term, “Latinx.” Drawing on intensive field research as well as her own personal story, Ramos chronicles how Latinx has given rise to a sense of collectivity and solidarity among Latinos unseen in this country for decades.

Dirt by by Bill Buford

“Blazingly entertaining. . . . This deliciously salty chronicle . . . is worth digging into.” —Heller McAlpin, NPR

A hilariously self-deprecating, highly obsessive account of the author’s adventures in the world of French haute cuisine, for anyone who has ever found joy in cooking and eating food with their family—from the author of the bestselling, widely acclaimed Heat.

The Lost City of Z by by David Grann

“Suspenseful. . . . Rollicking. . . . Reads with all the pace and excitement of a movie thriller.” —Michiko Kakutani, The New York Times

In 1925, the legendary British explorer Percy Fawcett ventured into the Amazon jungle, in search of a fabled civilization. He never returned. Over the years countless perished trying to find evidence of his party and the place he called “The Lost City of Z.” In this masterpiece of narrative nonfiction, journalist David Grann interweaves the spellbinding stories of Fawcett’s quest for “Z” and his own journey into the deadly jungle, as he unravels the greatest exploration mystery of the twentieth century.

The Zealot and the Emancipator by by by H.W. Brands

The Equivalents by by by Maggie Doherty

“Reads like a novel, and an intense one at that. . . . The Equivalents is an observant, thoughtful and energetic account.” —Margaret Atwood, The Globe and Mail (Toronto)

In 1960, Harvard’s sister college, Radcliffe, announced the founding of an Institute for Independent Study, a “messy experiment” in women’s education that offered paid fellowships to those with a PhD or “the equivalent” in artistic achievement. Five of the women who received fellowships—poets Anne Sexton and Maxine Kumin, painter Barbara Swan, sculptor Marianna Pineda, and writer Tillie Olsen—quickly formed deep bonds with one another that would inspire and sustain their most ambitious work. They called themselves “the Equivalents.” Drawing from notebooks, letters, recordings, journals, poetry, and prose, Maggie Doherty weaves a moving narrative of friendship and ambition, art and activism, love and heartbreak, and shows how the institute spoke to the condition of women on the cusp of liberation.