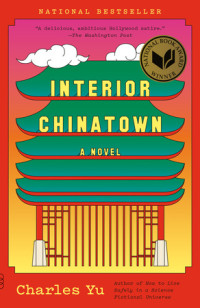 Lightning may never strike the same place twice, but a second stroke of genius is an entirely different story! Though it’s incredibly difficult to follow an acclaimed debut with another smashing success, these eight novels debunk the myth of the “sophomore slump” and celebrate the hard work and talent of these extraordinary writers. From classic and contemporary authors alike—James Baldwin and Toni Morrison to Chimamanda Ngozi Adichie and Jenny Offill—these triumphant second novels prove that some authors only continue to get better with age.

To kick off our list, we have the National Book Award Winner Interior Chinatown, which explores the themes of pop culture, assimilation, and immigration. Now available in paperback, don’t miss Charles Yu’s moving, daring, and masterful novel.

Willis Wu doesn’t perceive himself as the protagonist in his own life: he’s merely Generic Asian Man. Sometimes he gets to be Background Oriental Making a Weird Face or even Disgraced Son, but always he is relegated to a prop. Yet every day, he leaves his tiny room in a Chinatown SRO and enters the Golden Palace restaurant, where Black and White, a procedural cop show, is in perpetual production. He’s a bit player here, too, but he dreams of being Kung Fu Guy—the most respected role that anyone who looks like him can attain. Or is it? After stumbling into the spotlight, Willis finds himself launched into a wider world than he’s ever known, discovering not only the secret history of Chinatown, but the buried legacy of his own family.

Calla knows how the lottery works. Everyone does. On the day of your first bleed, you report to the station to learn what kind of woman you will be. A white ticket grants you marriage and children. A blue ticket grants you a career and freedom. You are relieved of the terrible burden of choice. And once you’ve taken your ticket, there is no going back. But what if the life you’re given is the wrong one? An urgent inquiry into free will, social expectation, and the fraught space of motherhood, Blue Ticket is electrifying in its raw evocation and desire and riveting in its undeniable familiarity.

From the New York Times bestselling author of The Night Circus comes a timeless love story set in a secret underground world—a place of pirates, painters, lovers, liars, and ships that sail upon a starless sea. Zachary Ezra Rawlins is a graduate student in Vermont when he discovers a mysterious book hidden in the stacks. As he turns the pages, entranced by tales of lovelorn prisoners, key collectors, and nameless acolytes, he reads something strange: a story from his own childhood. Bewildered by this inexplicable book and desperate to make sense of how his own life came to be recorded, Zachary uncovers a series of clues—a bee, a key, and a sword—that lead him to a masquerade party in New York, to a secret club, and through a doorway to an ancient library hidden far below the surface of the earth.

In the 1950s Paris of American expatriates, liaisons, and violence, a young man finds himself caught between desire and conventional morality. With a sharp, probing imagination, James Baldwin’s now-classic narrative delves into the mystery of loving and creates a moving, highly controversial story of death and passion that reveals the unspoken complexities of the human heart.

“A book that belongs in the top rank of fiction.” —The Atlantic

The House on Mango Street is the remarkable story of Esperanza Cordero, a young Latina girl growing up in Chicago, inventing for herself who and what she will become. Told in a series of vignettes—sometimes heartbreaking, sometimes deeply joyous—Sandra Cisneros’ masterpiece is a classic story of childhood and self-discovery. Few other books in our time have touched so many readers.

Buy the book | Get the reading guide

In this brilliantly imagined novel, Toni Morrison tells the story of Nel Wright and Sula Peace, who meet as children in the small town of Medallion, Ohio. Their devotion is fierce enough to withstand bullies and the burden of a dreadful secret. It endures even after Nel has grown up to be a pillar of the black community and Sula has become a pariah. But their friendship ends in an unforgivable betrayal—or does it end? Terrifying, comic, ribald and tragic, Sula is a work that overflows with life.

Dept. of Speculation by Jenny Offill

In the beginning, it was easy to imagine their future. They were young and giddy, sure of themselves and of their love for each other. “Dept. of Speculation” was their code name for all the thrilling uncertainties that lay ahead. Then they got married, had a child, and navigated the familiar calamities of family life—a colicky baby, a faltering relationship, stalled ambitions. When their marriage reaches a sudden breaking point, the wife tries to retrace the steps that have led them to this place, invoking everything from Kafka to the Stoics to doomed Russian cosmonauts as she analyzes what is lost and what remains. This stunning portrait of a marriage is a beguiling rumination on the mysteries of intimacy, trust, faith, knowledge, and the condition of universal shipwreck that unites us all.