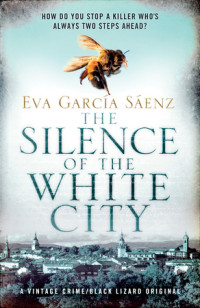 Have you started the acclaimed White City Trilogy? Following Inspector Unai López de Ayala, known as “Kraken,” the series begins with The Silence of the White City, where a madman holds the city of Vitoria hostage, killing its citizens in brutal ways and staging the bodies. This fast-paced, unrelenting thriller weaves in and out of the mythology and legends of the Basque country as it hurtles to its shocking conclusion.

In anticipation of the second installment, The Water Rituals, on sale on March 30, we asked the author to revisit the reader’s guide for The Silence of the White City and answer the questions herself! We love her views on Kraken and Alba’s character development, the meaning of themes like repetition and silence, and how the culture of Vitoria plays a major role in the novel. Enjoy this perspective on the dynamic crime trilogy from the person who brought the story and its characters to life—almost as good as having the author present for your book club!

Q: Throughout the book, Kraken grapples with his troubled past. How does the trauma of losing his wife and unborn children affect his current role as an inspector—specifically as a specialist in criminal profiling? Does it make him better or worse at his job? Perhaps a combination of both?

A: Kraken lives with “the survivor complex”—he feels guilty to have survived the accident in which his wife, his unborn twins, and his best friend died. But the fact that he wasn’t able to see the warning signs of his friend’s suicide leads him to specialize in criminal profiling, which allows him to lighten the burden of his guilt. He becomes obsessed with catching serial killers (individuals who kill more than three victims, with a “cool down” period in between) before they commit additional murderous acts. This obsession is beneficial to his profession, but it also leads him to become too emotionally involved with the case at hand, and that, in turn, becomes a blind spot that he is barely aware of.

Q: Discuss the different “silences” that occur in the novel. There are the silences of the lifeless murder victims and the mysterious serial killer, but what else goes unsaid that leads to confusion and intrigue?

A: Truly, the “silence” to which the title of the book refers is a condemnation of the silence of an entire city, and of a society that looks the other way despite being aware that a prestigious and powerful businessman mistreats his wife. The cycle continues with the next generation, when their illegitimate son, the proof of his infidelity, is also repeatedly mistreated by his adoptive parents, but again the whole town looks the other way and does not intervene.

Q: When Kraken first sees Alba, he observes, “She wore a whistle around her neck. A cautious person. More than that, someone aware of danger. Either she had been attacked, or she was afraid of an attack. And yet, she went out running before dawn every day of the week.” After knowing the full scope of Alba’s character, is there some truth to this first impression? Discuss the complexities in her and Kraken’s relationship.

Alba is a very interesting character because she represents the female side of the novel, the lady, the most mature of all. She is more mature and focused than Kraken and Estíbaliz because she has already overcome major challenges in her life, as she tells Kraken throughout the novels of the trilogy, and shares with him the loss of an unborn child. And that is the link between them from the beginning, the fact that they recognize each other as survivors of the same wound. They know that no one else can understand that pain, and it is enough for them to run together in silence in order to be well with each other. On the other hand, Alba has a stale marriage that no longer fulfills her, but is also not conflicted, at least until Kraken comes onto the scene and she realizes that she can feel intense emotions for another person again. In that sense, she is very brave and consistent with her decisions, because she knows that not only is she going to lose her marriage but also jeopardize her reputation at work.

Q: Discuss the theme of repetition: the resurgence of the ritualistic murders that occurred twenty years before, the pairs of murder victims with double-barreled surnames, the twin suspects, Ignacio and Tasio, and Inspector Kraken’s unborn twins. Why do so many things happen in pairs? Does this give the shocking twist at the end greater significance?

This is a novel of doubles: the suspected twins, the even-numbered victims, the different marriages…. But there is always a third disjunctive element that acts as a trigger for conflict: the third twin; The Kraken-Alba-Estíbaliz Trio; the triangle between the businessman, his wife Blanca, and the doctor; Unai’s family of three together with Germán and his grandfather…. My intention as a novelist was to explore this third intruder and the asymmetric dynamics that are established when he/she appears.

Q: Between Kraken’s brother Germán, his grandfather, and his cuadrilla, strong family relationships are an important part of his life in Vitoria. How do these relationships strengthen or weaken Kraken?

There is a very strong underlying custom in all the communities of northern Spain (Basque Country, Galicia, Asturias and Cantabria) in terms of closed groups and ties that last a lifetime: the family and the “cuadrilla.” I think it has to do with the harsh living conditions of the past and with the region’s orography, which prevented contact with other neighboring towns. I think we are descendants of people who had to trust their relatives and their neighbors to survive tough winters and poor harvests. Today, that feeling is very present, despite the fact that it is no longer necessary given that northern Spain is rich and has an enviable quality of life. Regarding whether these relationships weaken or make Kraken stronger, throughout the story it becomes evident that his greatest strength (his social environment) cares for him and protects him, but he cannot protect them because his work exposes him to the darkest parts of his society, and his popularity endangers all those around him as they turn into potential victims. I think that is the biggest drama for Kraken.

To buy The Silence of the White City click here.