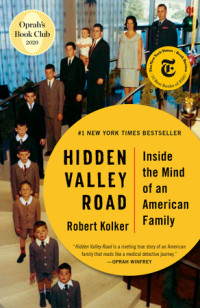 These days, celebrity book clubs are popping up left and right, but the one that started it all is still going strong! Oprah has long been one of the most influential book clubbers around, and over the years she has chosen a remarkable array of great reads. When we sat down to comb through the list of titles, we had a hard time narrowing it down to the more limited selection of our favorites you’ll see below. Happy reading!

“Hidden Valley Road is a riveting true story of an American family that reads like a medical detective journey and sheds light on a topic so many of us face: mental illness.” —Oprah Winfrey

Cora is a slave on a cotton plantation in Georgia. Life is hell for all the slaves, but especially bad for Cora; an outcast even among her fellow Africans, she is coming into womanhood—where even greater pain awaits. When Caesar, a recent arrival from Virginia, tells her about the Underground Railroad, they decide to take a terrifying risk and escape. Matters do not go as planned—Cora kills a young white boy who tries to capture her. Though they manage to find a station and head north, they are being hunted.

In Whitehead’s ingenious conception, the Underground Railroad is no mere metaphor—engineers and conductors operate a secret network of tracks and tunnels beneath the Southern soil. Cora and Caesar’s first stop is South Carolina, in a city that initially seems like a haven. But the city’s placid surface masks an insidious scheme designed for its black denizens. And even worse: Ridgeway, the relentless slave catcher, is close on their heels. Forced to flee again, Cora embarks on a harrowing flight, state by state, seeking true freedom.

A Tale of Two Cities & Great Expectations by Charles Dickens

Love in the Time of Cholera by Gabriel García Márquez

“One of the greatest love stories in world literature.” —Vladimir Nabokov

A famous legend surrounding the creation of Anna Karenina tells us that Tolstoy began writing a cautionary tale about adultery and ended up falling in love with his magnificent heroine. It is rare to find a reader of the book who doesn’t experience the same kind of emotional upheaval. Anna Karenina is filled with major and minor characters who exist in their own right and fully embody their mid-nineteenth-century Russian milieu, but it still belongs entirely to the woman whose name it bears, whose portrait is one of the truest ever made by a writer.

A Fine Balance by Rohinton Mistry

With a compassionate realism and narrative sweep that recall the work of Charles Dickens, this magnificent novel captures all the cruelty and corruption, dignity and heroism of India. The time is 1975. The place is an unnamed city by the sea. The government has just declared a state of emergency, in whose upheavals four strangers—a spirited widow, a young student uprooted from his idyllic hill station, and two tailors who have fled the caste violence of their native village—will be thrust together, forced to share one cramped apartment and an uncertain future.

The Reader by Bernhard Schlink

On an icy winter night in an isolated house in rural Vermont, a seasoned midwife named Sibyl Danforth takes desperate measures to save a baby’s life. She performs an emergency cesarean section on a mother she believes has died of stroke. But what if—as Sibyl’s assistant later charges—the patient wasn’t already dead? The ensuing trial bears the earmarks of a witch hunt, forcing Sibyl to face the antagonism of the law, the hostility of traditional doctors, and the accusations of her own conscience.

A Lesson Before Dying by Ernest J. Gaines