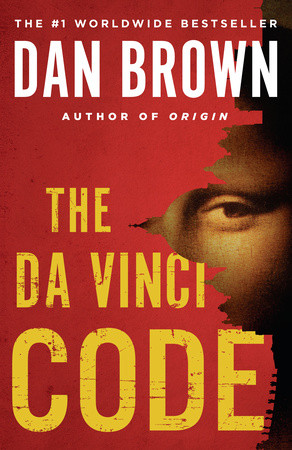 The following questions are intended to enhance your discussion, spotlight memorable passages, and make your reading experience of The Da Vinci Code even livelier.

While in Paris on business, Harvard symbologist Robert Langdon receives an urgent late-night phone call: the elderly curator of the Louvre has been murdered inside the museum. Near the body, police have found a baffling cipher. Solving the enigmatic riddle, Langdon is stunned to discover it leads to a trail of clues hidden in the works of Da Vinci...clues visible for all to see...and yet ingeniously disguised by the painter.

Langdon joins forces with a gifted French cryptologist, Sophie Neveu, and learns the late curator was involved in the Priory of Sion—an actual secret society whose members included Sir Isaac Newton, Botticelli, Victor Hugo, and Da Vinci, among others. The Louvre curator has sacrificed his life to protect the Priory's most sacred trust: the location of a vastly important religious relic, hidden for centuries.

In a breathless race through Paris, London, and beyond, Langdon and Neveu match wits with a faceless powerbroker who appears to work for Opus Dei—a clandestine, Vatican-sanctioned Catholic sect believed to have long plotted to seize the Priory's secret. Unless Langdon and Neveu can decipher the labyrinthine puzzle in time, the Priory's secret—and a stunning historical truth—will be lost forever.

In an exhilarating blend of relentless adventure, scholarly intrigue, and cutting wit, symbologist Robert Langdon (first introduced in Dan Brown's bestselling Angels & Demons) is the most original character to appear in years. The Da Vinci Code heralds the arrival of a new breed of lightening-paced, intelligent thriller...surprising at every twist, absorbing at every turn, and in the end, utterly unpredictable...right up to its astonishing conclusion.

1. As a symbologist, Robert Langdon has a wealth of academic knowledge that helps him view the world in a unique way. Now that you've read The Da Vinci Code, are there any aspects of life/history/faith that you are seeing in a different light?

2. Langdon and Teabing disagree as to whether the Sangreal documents should be released to the world. If you were the Grand Master of the Priory of Sion, would you release the documents? If so, what do you think their effect would be?

3. What observations does this novel make about our past? How do these ideas relate to our future?

4. Other than his fear of being framed for murder, what motivates Langdon to follow this perilous quest? Do his motivations change?

5. The novel's "quest" involves numerous puzzles and codes. Did you enjoy trying to solve these puzzles along with the characters? Did you solve any of the puzzles before the characters did?

6. If you could spend a day in any of the places described in this novel, where would it be, and why? The Louvre? Westminster Abbey? Rosslyn Chapel? The Temple Church? Somewhere else?

7. Historian Leigh Teabing claims the founding fathers of Christianity hijacked the good name of Jesus for political reasons. Do you agree? Does the historical evidence support Teabing's claim?

8. Has this book changed your ideas about faith, religion, or history in any way?

10. Saunière placed a lot of confidence in Langdon. Was this confidence well-placed? What other options might Saunière have had? Did Saunière make the right decision separating Sophie from the rest of her family?

11. Do you imagine Langdon should forgive Teabing for his misguided actions? On the other hand, do you think Teabing should forgive Langdon for refusing to release the Sangreal documents?

12. Does the world have a right to know all aspects of its history, or can an argument be made for keeping certain information secret?

13. What is interesting about the way this story is told? How are the episodes of the novel arranged and linked? In your discussion, you might want to identify where the turning points in the action are where those moments are after which everything is different. Did you anticipate them?

14. What is the novel's theme? What central message or idea links all the other components of the novel together?

15. For most people, the word "God" feels holy, while the word "Goddess" feels mythical. What are your thoughts on this? Do you imagine those perceptions will ever change?

16. Will you look at the artwork of Da Vinci any differently now that you know more about his "secret life?"

Dan Brown is the bestselling author of Digital Fortress, Angels & Demons, and Deception Point. He lives in New England.