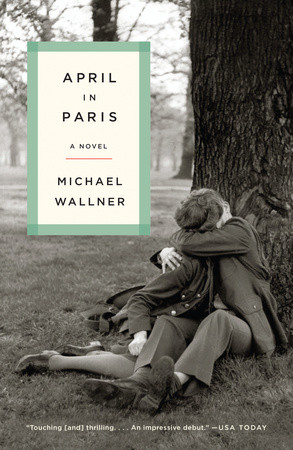 The introduction, discussion questions, and suggestions for further reading that follow are designed to stimulate your group's discussion of April in Paris, Michael Wallner's gripping novel about love and deception in Nazi-occupied Paris.

What happens when a young translator for the Nazi SS in occupied Paris decides he wants to spend his off-hours blending in with the locals, gives himself a French identity, and falls in love with a beautiful resistance fighter? This intriguing question is the premise for Michael Wallner's extraordinary first novel, April in Paris.

Roth is a 21-year-old translator who has spent most of the war working in the army's back offices in occupied Paris. But when SS interrogators learn of his exceptional fluency in French his service takes a much darker turn. He is forced to translate the answers provided by French prisoners suspected of helping the resistance as they are brutally tortured. Roth tries to ignore the horrors of what's happening in front of him and separate himself from his “work.” Whenever he can risk it, he dons his checkered civilian suit, removes all traces of his German identity, and takes to the streets as Antoine. Ironically, it is his facility with language that both forces him to witness torture and to be able to shed his identity as a witness to torture. In Paris, he lets his penchant for dreaminess carry him along, and soon he falls in love, at a distance, with Chantal, the beautiful daughter of a bookseller. This proves to be even more complicated than it might seem at first, when Chantal lures him to her father's bookshop and into some serious questions about who he really is. Chantal and her father are resistance fighters and suspect Roth of being a collaborator with the Nazis.

The tensions that unfold as Roth tries to maintain two identities-Nazi soldier and Parisian civilian-as well as a love affair with a woman dedicated to destroying the German occupation, rise to a blistering intensity when an explosion kills several SS officers in a club where Chantal works. Because Roth appeared to have foreknowledge of the event, he is suspected of aiding the resistance and soon finds himself facing the very same kind of interrogation he has so often witnessed. By trying to play it safe, by not taking a clear stand, neither siding with the resistance nor embracing his role as an occupier, Roth finds himself in no man's land, completely unprotected.

Much of the novel concerns the fluid nature of identity-Roth and Chantal are both actors, of a sort, both able to assume different masks and to deceive others about their true intentions. But April in Paris has much to say as well about the nature of loyalty, the horrors of torture, the fate of love during war, and the consequences that can befall a man when pretending to be someone other than he is takes precedence over knowing and following his convictions.

1. Scores of novels and nonfiction books have been written about World War II. In what ways is April in Paris distinctive? What aspects of the war does it bring to light that other works haven't fully explored?

2. Though April in Paris is set during World War II, in what ways does it illuminate the use of torture in our own time?

3. How does Roth feel about his job as translator of prisoner interrogations? Why does he feel compelled to risk so much in order to assume the identity of a Parisian?

4. After he is arrested, Roth comes to a searing realization: “I was a coward who didn't dare make his opposition public. Leibold's brutish corporals were clearer about their convictions than I was about mine” [p. 193]. Is this an accurate self-assessment? What are the consequences of Roth's “cowardice”? How might he have made his opposition public?

5. Roth tells Hirschbiegel, “First something happens . . . . Some random thing. Then the next thing happens. And then the next . . . . One thing after another, deeper and deeper” [p. 86]. What does this statement reveal about Roth's attitude toward life and his own sense of agency? How would Chantal likely regard such a view?

6. Why does Roth fall in love with Chantal? Does Chantal love him in return, or is she merely using him?

7. Roth watches a one-armed man mow the grass with a scythe and asks SS officer Leibold: “How long do you suppose it took him to learn to use that scythe with one arm?” Liebold offers a sardonic reply: “War is the mother of invention” [p. 33]. In what ways is Leibold's statement true? What kinds of inventions did World War II inspire? What does this statement reveal about Leibold's sensibility and the Nazi sensibility in general?

8. Michael Wallner is an actor and a screenwriter as well as a novelist. What scenes in April in Paris seem especially cinematic? In what ways are both Roth and Chantal actors?

9. How do the stories of love and war in April in Paris intersect and illuminate each other?

10. Rieleck-Sostmann tells Roth, “You're a dreamer, Corporal. You're out of step with the times” [p. 40]. Is this true? In what sense is he “a dreamer”? In what ways is he unrealistic, or given to dangerously improbable fantasies?

11. What role does identity play in the novel? How does Roth try to shed his true identity? How does Chantal herself play with different identities or disguises? Does the novel seem to be making some larger point about the fluidity of identity?

12. Discuss the irony-and the terror-of Roth's being a translator during brutal interrogations and then having to undergo the same tortures he has witnessed being done to others.

13. How does Wallner create and sustain suspense throughout the novel?

14. Near the end of the novel, Roth thinks to himself, “I had learned everything and understood nothing” [p. 242]. What does he mean by this? What has he learned? What has he failed to understand?

Michael Wallner is an actor and screenwriter. He lives in Germany and divides his time between Berlin and the Black Forest, and is at work on his next novel.