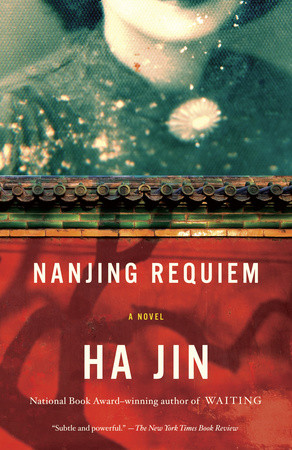 The introduction, discussion questions, suggestions for further reading, and author biography that follow are designed to enhance your reading group’s discussion of Nanjing’s Requiem. Marked by an unnerving austerity, best-selling and award-winning author Ha Jin examines a period in Chinese history wracked by inexplicable terror and miraculous resistance.

Nanjing Requiem is a searing new novel that unfurls during one of the darkest moments of the twentieth century: the Rape of Nanjing.

In 1937, with the Japanese poised to invade Nanjing, Minnie Vautrin—an American missionary and the dean of Jinling Women’s College—decides to remain at the school, convinced that her American citizenship will help her safeguard the welfare of the Chinese men and women who work there. She is painfully mistaken. In the aftermath of the invasion, the school becomes a refugee camp for more than ten thousand homeless women and children, and Vautrin must struggle, day after day, to intercede on behalf of the hapless victims. Even when order and civility are eventually restored, Vautrin remains deeply embattled, and she is haunted by the lives she could not save.

With extraordinarily evocative precision, Ha Jin recreates the terror, the harrowing deprivations, and the menace of unexpected violence that defined life in Nanjing during the occupation. In Minnie Vautrin, he has given us an indelible portrait of a woman whose convictions and bravery prove, in the end, to be no match for the maelstrom of history.

At once epic and intimate, Nanjing Requiem is historical fiction at its most resonant.

1. Why does Ha Jin tell the story of Nanjing and Minnie Vautrin in Anling’s eyes and voice? What does her voice bring to the novel and to Minnie’s story? What are Anling’s strengths and weaknesses as a character and a narrator? Is her version of the events believable? Does her voice change over the course of the novel?

2. In what ways is this novel about power relationships—between the Japanese and Chinese, between soldiers and civilians; between Dr. Dennison and Minnie; between the foreigners living in Nanjing and the Chinese citizens; between teachers and students; between those living in the dormitories and those not; between men and women? Does any one person or group emerge victorious over another?

3. What does the word “requiem” in the title refer to? What does it imply? Why do you think Ha Jin chose this as the title for this novel?

4. Why has Ha Jin chosen American Minnie Vautrin’s story to tell within the larger framework of the Rape of Nanjing? Why not choose a Chinese woman’s story? Or a Chinese man’s?

6. Gardens and the natural landscape play a part in this novel, despite its taking place in a large Chinese city. Describe some of the trees and flowers in the novel. Why do Minnie, Anling, and the gardener go to great lengths to keep the college garden flourishing regardless of the chaos and destruction occurring all around them?

7. Reviewers have commented that the language of this novel is different from other Ha Jin novels: “a matter-of-fact, plainspoken narrative” (Kirkus Reviews); “bluntness—jarringly effective—different from his previous works” (Library Journal); “writing with unnerving austerity” (Booklist). Do you agree with his reviewers that the language is more direct, blunter and more plainspoken?  Why do you think Ha Jin decided to use this tone?

8. Why do you think Ha Jin begins his novel with a young boy’s graphic, horrific story of what he saw as he ran from the college to the Safety Zone Committee headquarters in the early days of the occupation? How does this set the tone for the rest of the novel?

9. When Anling comments that “most people are good at forgetting. That’s a way of survival,” Minnie responds, “History should be recorded as it happened so it can be remembered with little room for doubt and controversy” (p. 97). Describe their conflicting views of the way to deal with history, memory, and national atrocities.

10. “What this country needed was Christianity, [Minnie] often told me, and I shared her belief.” (p. 97), says Anling. Why do you think Minnie and Anling believe this?

11. Describe the “madwoman” in Nanjing Requiem. Why does Minnie feel so guilty about her and take her under her wing?

12. Why does Minnie let the Japanese soldiers take a number of women refugees? What do you think you would have done in the same circumstances?

13. “We Chinese were obsessed with food and face, so even in a time of distress like now, we’d still make the best use of the pleasure life could offer, turning a meal into a small feast,” (p. 188) comments Anling. Describe other instances of this obsession in the novel. Is it positive or negative?

14. Describe Anling’s relationship with her son. Why is it complicated? How does Anling feel about her half-Japanese grandchild?

15. Describe Minnie’s relationship with Dr. Dennison. Why is it so fraught with tension and competition? Given that they both love China and the college, why can’t they work together toward shared goals?

16. Describe Minnie and Anling’s friendship. Do they understand each other intimately? How do they look out for and protect each other? Why do they trust each other?

17. How is the school able to survive the Rape of Nanjing and the subsequent occupation by the Japanese soldiers? How is Minnie able to orchestrate the housing and feeding of the refugees and institute various programs?

18. What happens to Minnie in the end? Did you see the ending coming? Why or why not? What ultimately happens to the college, and to the city of Nanjing?