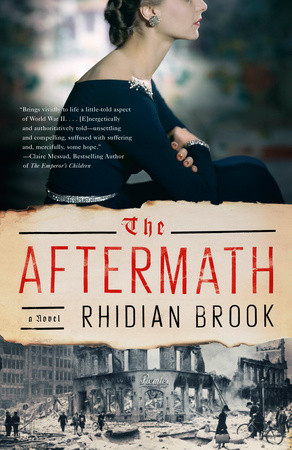 The questions, discussion topics, and reading list that follow are intended to enhance your reading group’s discussion of The Aftermath, award-winning author Rhidian Brook’s courageous, emotionally gripping new novel set in Germany during the tumultuous year following the end of World War II.

Hamburg, 1946. While thousands wander the rubble, lost and homeless, Colonel Lewis Morgan, charged with overseeing the rebuilding of this devastated city and the denazification of its defeated people, is stationed in a grand house on the River Elbe. He is awaiting the arrival of his wife, Rachael—still grieving for their elder son—and their only surviving son, Edmund. But rather than force the owners of the house, a German widower and his rebellious daughter, out onto the streets, Lewis insists that the two families live together. In this charged atmosphere, both parents and children will be forced to confront their true selves as enmity and grief give way to passion and betrayal, to their deepest desires, their fiercest loyalties, and the transforming power of forgiveness.

“Rhidian Brook’s arresting novel brings vividly to life a little-told aspect of World War II: its aftermath. His story—energetically and authoritatively told—is unsettling and compelling, suffused with suffering and, mercifully, some hope.”
—Claire Messud, author of The Woman Upstairs

“A moving, always enthralling journey into the dark and light of history. Rhidian Brook has written a brilliant novel.”
—Joseph O’Neill, author of Netherland

“Rhidian Brook takes a piece of history I thought I knew well and breaks it open, The Aftermath is a compelling, surprising, and moving novel.”
—Sadie Jones, author of The Uninvited Guests

1. The novel’s title appears to be straightforward, but there are many types of aftermath within. What do you think the title represents?

2. What is the beast? What does it symbolize?

3. On page 6, Wilkins says that, as Germans, the Luberts are “not allowed the luxury of disappointment.” What does he mean by that? Who is allowed to be disappointed?

4. Several times in the novel, characters mention Stunde Null, the Zero Hour. How does the concept hold them back, or help them?

5. Why do you think Lewis is so soft-hearted, compared to the other British officers? During the novel Rachael seems bothered by his leniency, but do you think it was a trait she viewed differently before the war?

6. Why did Michael’s death affect each family member so differently? How does each of them, ultimately, begin to heal?

7. There are several families in the novel, and multiple orphans. How does the presence—or loss—of family members affect the characters’ attitudes?

8. Rachael learns to play a piece by Schumann called “Warum”. Stefan tells her the title “doesn’t translate exactly. It is ‘why?’ But it is more ‘Why did this happen? For what reason?’” (page 69) Later, after the shooting, Lewis tries to play the same piece (page 246). Why is this significant?

9. The “resistance movement” in the novel is very different from what most of us think when we hear that term. How much did you know about postwar German resistance?

10. What makes Freda so susceptible to Albert and his cause?

11. When Edmund sees that his father’s cigarette case doesn’t hold a picture of him, why does he react so calmly? And later, when he asks Lewis about it, why doesn’t he push for an explanation?

12. After Herr Koenig is exposed as a member of the Nazi Special Police, Lewis tells Edmund, “Sometimes . . . the bad in someone…is buried quite deep” (page 162). Who else in the novel might this describe?

13. Although Lewis considers forgiveness to be “the most powerful weapon in their armoury” (page 170), many of the other characters struggle to forgive their former enemies. Discuss the notion of forgiveness: by the end, which characters have managed to find their way toward it, and which haven’t?

Were you as surprised as Rachael by the real subject of the painting Stefan took down from the wall? How would you have responded to the revelation?

15. When Berti burns Mutti’s skeleton—in a city destroyed by an Allied firestorm, after a war in which millions were cremated in the camps—what point is the author making?

16. If you were Rachael, how would you have revealed what she learned about Claudia?

17. On page 236, Rachael says to Stefan, “It was loss that brought us together. And you have refound what you lost.” What did Stefan refind?

18. Why does Lewis feel compelled to avenge Barker’s death, when he accepted his son’s so smoothly?

20. Why does Burnham feel justified in looting his requisitioned home? Why is he surprised when Lewis calls him on it?

21. Most of the time, the story filters through Lewis and his family. Why do you think the author chose to begin and end the novel with Ozi?

Rhidian Brook is an award-winning writer of fiction, television, and film. His debut novel, The Testimony of Taliesin Jones, won the Somerset Maugham Award, a Betty Trask Award, and the Authors’ Club Best First Novel Award. His stories have appeared in The Paris Review and New Statesman. He lives in London with his wife and two children.