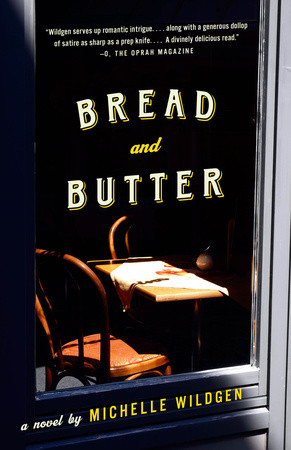 The information and questions in this guide are intended to help you in your discussion of Michelle Wildgen's Bread and Butter.

Kitchen Confidential meets Three Junes in this mouthwatering novel about three brothers who run competing restaurants, and the culinary snobbery, staff stealing, and secret affairs that unfold in the back of the house.

Britt and Leo have spent ten years running Winesap, the best restaurant in their small Pennsylvania town. They cater to their loyal customers; they don't sleep with the staff; and business is good, even if their temperamental pastry chef is bored with making the same chocolate cake night after night. But when their younger brother, Harry, opens his own restaurant—a hip little joint serving an aggressive lamb neck dish—Britt and Leo find their own restaurant thrown off-kilter. Britt becomes fascinated by a customer who arrives night after night, each time with a different dinner companion. Their pastry chef, Hector, quits, only to reappear at Harry's restaurant. And Leo finds himself falling for his executive chef-tempted to break the cardinal rule of restaurant ownership. Filled with hilarious insider detail—the one-upmanship of staff meals before the shift begins, the rivalry between bartender and hostess, the seedy bar where waitstaff and chefs go to drink off their workday—Bread and Butter is both an incisive novel of family and a gleeful romp through the inner workings of restaurant kitchens.

1. How are Harry, Leo, and Britt different?  How are they alike?

2. What is Harry trying to prove by opening up a restaurant in the same town where his brothers have their restaurant? Is his experience a useful background for a restaurateur, or do you think Leo and Britt followed a more helpful path toward owning a restaurant?

3. How does the relationship between the brothers evolve over the course of the novel?

4.  How would you define the roles the brothers occupy in their family? How do those roles shift over the course of the book?

5. What do you think about the names of the restaurants?  What do they reflect about each one?

6. How has the novel changed the way you think about restaurants and the people who work in them?

7. Do Leo and Britt own their restaurant or does it own them?  What about Harry?

8. What are the implications (moral and practical) of Leo dating Thea?  Is he wrong to do so?

9. How does Camille change Britt?  What about Thea and Leo?

10. What was your favorite main course described in the novel?  Favorite dessert?

11. How would you describe your attitude toward food?  Passionate?  Perfunctory?  Adventurous?  Would you order the lamb’s neck?

MICHELLE WILDGEN is the executive editor of the literary quarterly Tin House. A graduate of the University of Wisconsin, Wildgen received her MFA from Sarah Lawrence College. Her fiction, personal essays, and food writing have appeared in The New York Times; O, The Oprah Magazine; Best New American Voices; Best Food Writing; Prairie Schooner; and elsewhere. Michelle is the author of the novels But Not for Long and You're Not You, and the editor of an anthology, Food & Booze: A Tin House Literary Feast. You're Not You has been optioned for film by Hilary Swank and Denise Di Novi.