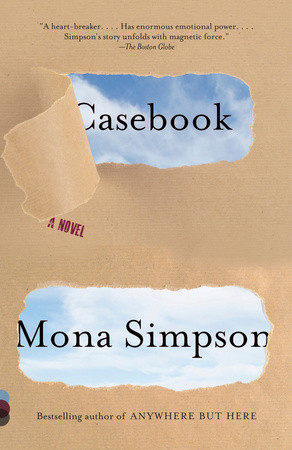 The questions, discussion topics, and other material that follow are intended to enhance your group’s conversation about Casebook, a work of fiction by acclaimed author Mona Simpson.

Miles Adler-Hart, helped by his friend Hector, spies and listens in on his parents, whom he discovers are separating. Both boys are enthralled by Miles’s unsuspecting mother, Irene, who is “pretty for a mathematician.” They rifle through her dresser drawers and strip-mine her computer diary, finding that all leads pull them straight into her bedroom, and into questions about a stranger from Washington, D.C., who weaves in and out of their lives. Their amateur detective work starts innocently enough but soon takes them to the far reaches of adult privacy as they acquire knowledge that will affect the family’s well-being, prosperity, and sanity. Once burdened with this powerful information, the boys struggle to deal with the knowledge that there is evil in the world, and that someone they know is not who he claims to be. They proceed to concoct appropriate but hilarious modes of revenge on their villain and eventually, haltingly, learn to offer animal comfort to those harmed and to create an imaginative path to their own salvation.

1.  In the opening note from Hershel Geschwind of Neverland Comics, Hershel writes that Hector and Miles will continue to go back and forth with this manuscript “until they get their story straight or until they grow up, whichever comes last, or never.” How different do you think the boys’ accounts are of what happened, and what role do Hector’s footnotes play throughout the manuscript? What exactly do you think Herschel means by “grow up”?

2. This book is in many ways a coming-of age -story, but Miles learns many of his life lessons by spying on his mother, not through his own actual experience. Why do you think the author has chosen to focus so extensively on the effects of adult lives—the secret lives of parents—on their children?

3. How the motto of Miles’s and Hector’s school— motto, "is it true, is it kind, is it necessary? Will it improve on the silence?”shape their view of the world? What impact does Eli have on this view?

4. Did Miles’s extensive involvement with his mother’s personal life have a negative impact on his ability to focus on his own experiences, or did he gain greater insight into what it means to love than he might have otherwise?

5. What do we learn about Irene and about her relationships with Carey and Eli—and about adult lives in general—that we might not find out about were the novel not told through Miles’s perspective? What do we gain? Do you think most teenagers are as fascinated by the lives of their parents as Miles and Hector are?

6. Miles mentions that when Eli promises to put up Christmas lights, it was the “first feeling I had for Eli. We could be men who did that shit. I liked the idea of putting up lights ourselves” (page 28). What do the Christmas lights represent to Miles?

7. Why is Hector just as invested in uncovering the truth about Eli as Miles is? Or is he even more invested?

8. What is the significance of the notes on the kitchen blackboard? How do the quotes act as a reflection of what is going on in the story, whether or not Irene is aware of it at the time? For example, on page 41, what is the significance of the quote “benighted: in a state of pitiful or contemptible intellectual or moral ignorance.” Do you think Eli ever found Irene’s lack of awareness of his own deceit contemptible?

9. Several times throughout the novel Eli mentions his love for animals. The only stories he tells that Miles never doubts involve this deep love. Miles says at one point that he saw Eli holding the dead kittens, and he knew how to do it. Do you think the story about the sick cat, Coco, was true? Eli seems to be able to care for animals and not people. What does this say about who he is?

10. Does Eli ever really love Irene, Miles, and the Boops? What were his motives for stringing them along, and, do you think he ever believed the outcome would be different than it was?

11. On page 104 Miles describes romance as seeming like “friendship, but with a fleck of sparkle.” How do Miles’s feelings about romantic and platonic love change over the course of the novel? What does he learn from his parents’ relationship, from Eli and the Mims’ relationship, and from his friendship with Hector? Do you think Miles ever really questions his own sexuality?

12. On page 108, Miles says that when he “thinks of [his] life as a boy, it ended there that night, while the Mims stared out at the Pacific Ocean with its barreling waves, the world indifferent to our losses.” What causes this turning point?

13. What role does Ben Orion play? Why does he help Miles and Hector without asking for payment?

14. How does hearing directly from an older Hector through his comments in footnotes to the text alter or inform your impression of him as a character? What, if anything, does it bring to light about his relationship with Miles? Did it surprise you that he got into drugs when he went off to school? Do you think one of them needed the other more, and if so, why?

15. Why do you think Irene puts up with all of Eli’s broken promises? What is it about him that keeps drawing her back, despite never seeing where he lives, never meeting his child or his brother, and the fact that he never follows through on any of the futures he proposes, even with things as small as the buying of silverware?

16. On page 181, at Irene’s forty-fifth birthday party, Eli makes this speech: “All of you love Reen for many reasons. . . . But I, I love her, I love her because I, I can’t help loving her. No matter what ever happens, I am and I will always be in love with Irene Adler.” What does he mean, and what is it about Irene that makes Eli love her, or at least claim to love her, so much?

18. What leads Miles to say that “hope for happiness is happiness” (page 229)? Do you think this statement is true?

19. Why do you think Miles lies to Eli about his mother dying in the arms of a man she loved when he runs into him years later?

20. Mona Simpson is known as an author of voice. How do you think the voice of Miles stacks up? Does he feel real?

21. What do you think Irene got out of her relationship with Eli? Does she, and do we, learn anything about her through her sexual experiences with him that give insight into who she is, or into what may have gone wrong with her marriage? Do you think she ultimately found happiness?

Mona Simpson is the author of Anywhere But Here, The Lost Father, A Regular Guy, Off Keck Road, and My Hollywood. Off Keck Road was a finalist for the PEN/Faulkner Award and won the Heartland Prize from the Chicago Tribune. She has received a Whiting Writers’ Award, a Guggenheim grant, a Lila Wallace–Reader’s Digest Writers’ Award, and, recently an Academy Award from the American Academy of Arts and Letters. She is on the faculty at UCLA and also teaches at Bard College.