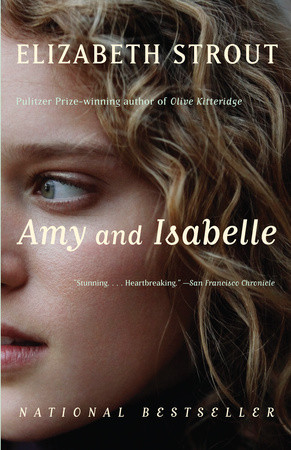 The story of a single mother and her teenage daughter during one fateful year, Amy and Isabelle illuminates the complexities that lie at the heart of the first, and most intimate, relationship in our lives. The questions, discussion topics, and suggested reading list that follow are intended to enhance your reading group's exploration of the ties that bind mother and daughter, and the secrets--about the past and present, about love and sexuality--that simmer beneath the surface.

In the small New England town of Shirley Falls, the arrival of Isabelle Goodrow and her infant daughter, Amy, stirs a bit of curiosity. Declaring she is a widow simply in search of a place to earn a living, Isabelle is accepted--if not embraced--by her neighbors. She works hard at her job at the mill, eventually rising to become secretary to the boss, Avery Clark. She attends church regularly and cares for her daughter conscientiously. Now sixteen, Amy is shy and quiet, drawing the passing attention of others only because of her long, lush hair. But things are different with Mr. Robertson, her new math teacher. He seems to see something special in Amy, and their intimate after-school conversations fill a need Amy barely knew existed. Step by tentative step, Amy awakens to love and physical pleasure--and, succumbing to Mr. Robertson's persuasive charms, she is swept across the line from childhood fantasy to adult passion. Their transgression, discovered by Avery Clark, marks a turning point in the lives of both Amy and Isabelle, an unexpected and dangerous crossroad each must navigate on her own.

Set against the vividly evoked background of Shirley Falls and the large and small dramas that unfold during the year--a teenage pregnancy, a UFO sighting, a missing child, the marital and medical problems of Isabelle's co-workers--Amy and Isabelle portrays the coming of age not only of a teenage girl experiencing love and betrayal for the first time, but of a woman who, in pursuit of a respectable life, has denied her deepest emotions and longings.

1. Isabelle comes to Shirley Falls in order to start a new life. How does her desire to re-create herself affect the way she is perceived by other people? How does it influence the way she raises Amy?

2. Why is Amy so attracted to Fat Bev? What does the atmosphere at the mill offer her that she finds neither at home nor at school?

3. What role does Isabelle's "crush" on Avery Clark play in her life? How do her fantasies about being a loving wife to Avery compare to the way she treats Amy and runs their home? Which is the "real" Isabelle?

4. Before you know the reason for the estrange-ment between Amy and Isabelle, where do your sympathies lie? What insights do their brunch in the restaurant and window-shopping spree [pp. 54-56], as well as their uncomfortable encounter with Barbara Rawley at the grocery store [p. 57] give you into the nature of their relationship before the crisis?

5. At first Mr. Robertson appears to be a motivational teacher. Are his teaching methods appropriate and effective? Are his questions and comments to Amy and the other students commonplace, or unusual for a math teacher? Is it possible for a high school teacher to be "cool" without overstepping the boundaries between student and teacher? Why do you think he was drawn to Amy? At what point do Mr. Robertson's attentions toward her become unacceptable?

6. Why doesn't Amy tell Isabelle about Mr. Robertson at the beginning of their friendship? Why does Amy feel "as though something dark and wobbly sat deep within her chest" [p.78] after her as yet still innocent afternoons with Mr. Robertson?

7. What impact does Isabelle's protectiveness have on Amy's character and her sense of self? How did Isabelle's own childhood [p. 185] shape her character, not only as a mother, but as a woman?

8. Why does Strout choose Madame Bovary as the first serious book to engage Isabelle's passionate interest and attention? What parallels, if any, does Isabelle draw between Emma Bovary's life and her own? What other similarities exist between the two women?

9. Why does her conversation with Amy so quickly take a wrong turn when Isabelle hears about Amy and Mr. Robertson [p.159]? Why does Amy's accusation that Isabelle doesn't "know what the world is like" [p. 161] hurt her so deeply? Is Amy's outburst crueler than Isabelle's own impulse to shout at Amy "You weren't even supposed to be born" [p. 162]?

10. Why does Amy insist that she initiated the physical relationship? Is she only trying to protect Mr. Robertson, or does she have other reasons for taking the responsibility for what happened?

11. Mr. Robertson's seduction of Amy and his absolute disregard for the consequences of his act shock Isabelle. After her confrontation with him, why does she say that "in the end, he 'won.' In the end he had retained his sense of dignity and managed to destroy hers" [p. 166.]? Do you think that Isabelle mishandles the situation or is Mr. Robertson incapable feeling shame or remorse?

12. Why is Isabelle satisfied with Mr. Robertson's promise to leave town? Are her motives entirely unselfish? What would have been the consequences for both Amy and Isabelle if the scandal had been made public? Why did Isabelle react so differently to Amy's actions than Stacey's parents did to their daughter's pregnancy?

13. How accurate is Amy's belief that her mother is angry because Amy found someone to love her? What would make Amy think that? "It was not . . . the fact that she had been lying to Isabelle for so many months nor did Isabelle hate Amy for having taken up all the space in her life. She hated Amy because the girl had been enjoying the sexual pleasures of a man, while she herself had not" [p. 206]. Are Isabelle's feelings natural?
Why or why not?

14. Amy and Isabelle's conflict is presented within the context of small town life. How do the events in the lives of the women at the mill--like the break-up of Dottie Brown's marriage--and the revelations about Dr. Burrow's affair with Peg Dunlap and the secret relationship between the high school principal and the Spanish teacher, enhance the book?

15. Do you think the novel would have unfolded differently if Amy and Isabelle had lived in a large city? In what ways does the story about the abduction of a teenage girl in the neighboring town mirror what is happening in Amy's and Isabelle's lives?

16. What is the significance of Amy's relationship with Paul Bellows? What purpose do they serve in each other's lives?

17. Is Isabelle's reaction to Amy's involvement with Mr. Robertson justified after she reveals her own past to Dottie and Bev? Were both Amy and Isabelle particularly vulnerable because they lived in fatherless homes? How/why was this incident the impetus for Isabelle to confront her own past and to help Amy find hers?

18. Why does Strout describe the changing seasons in such detail throughout the book? What parallels are there between the rhythms of the natural world and the rhythms of life in the town? Does this add to the flow and structure of the book or did you feel it was unnecessary or even intrusive?

Born in Portland, Maine, Elizabeth Strout now lives in New York City with her husband and daughter. She has been teaching literature and writing at Manhattan Community College for ten years and has also taught writing at the New School. Her fiction has appeared in many magazines, including The New Yorker.