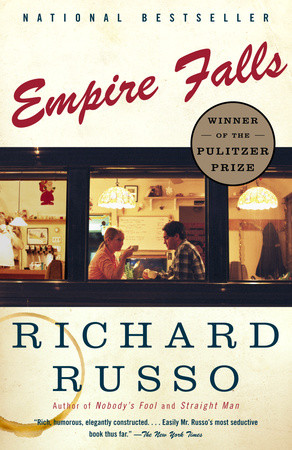 The introduction, discussion questions, suggested reading list, and author biography that follow are intended to enhance your reading group’s discussion of Richard Russo’s Empire Falls, a wonderfully evocative portrait of a small town in Maine.

Dominated by the Whiting family, the founders of the three mills that provided employment for most of the town’s residents, Empire Falls finds itself in sharp decline at the turn of the twenty-first century. Its mills are closed, stores are boarded up, and its population is dwindling. The families that remain live on memories of the past and the shared fantasy that the mills will reopen and the once-thriving town will experience a renaissance. However, the formidable Mrs. Whiting, widow of the last Whiting son (and rumored to be the richest woman in central Maine), makes no concessions to the community’s needs or fantasies. As the owner of the few viable businesses left in Empire Falls and a dependable, if begrudging, source of funds for essential town improvements, Mrs. Whiting wields her power over the town and its inhabitants with an iron will.

Miles Roby was once known around town as a young man smart enough to escape Empire Falls. A devoted son, he put his dreams on hold when his mother’s illness interrupted his last year of college. Twenty years later, Miles is the proprietor of Mrs. Whiting’s just barely profitable Empire Grill, the soon-to-be ex-husband of Janine (who has left him for the slick owner of the flashy new health club), and the proud father of Tick, a bright, loving teenager. Seduced by Mrs. Whiting’s promise to bequeath him the restaurant, Miles stoically submits to her arbitrary, often humiliating demands—until the accidental discovery of a family secret shocks him into a troubling reevaluation of his life and the small town that shaped it. Nothing, however, prepares him for the horrific event that ultimately sets him free.

As he exposes the betrayals and self-deceptions, false hopes and genuine desires that motivate his quirky cast of characters, Richard Russo transforms the story of one town into an unforgettable exploration of the human condition. By turns funny, poignant, satiric, and shocking, Empire Falls captures humanity at its best and its worst.

1. Richard Russo’s description of Empire Falls is as memorable and vivid as his portraits of the people who live there. How do the details he provides about the town, including its streets, buildings, and neighborhoods, create a more than physical backdrop against which the story is played out? How does his use of flashbacks strengthen the reader’s sense of the town as a living character?

2. “One of the good things about small towns, Miles’s mother had always maintained, was that they accommodated just about everyone” [p. 21]. Is this an accurate description of Empire Falls? Which characters in particular benefit from this attitude? What influences the level of tolerance Miles is willing to extend to Max Roby, Walt Comeau, and Jimmy Minty, all of whom are constant irritants to him? What does he see as their redeeming characteristics?

3. Why is Miles’s relationship with Tick so important to him? In what ways is it reminiscent of his mother’s attachment to him? How do Grace’s expectations for Miles, as well as her ultimate disappointment in him, shape the way he is raising Tick?

4. Even before the full story of Grace and Max’s marriage is revealed, what hints are there that Grace was less than the ideal wife and mother of Miles’s memory? Why does Miles choose to accept his mother’s version of events concerning their trip to Martha’s Vineyard, even though it entails a betrayal of his father [pp. 133–50]? When Miles finally realizes who Charlie Mayne is, does it change his feelings about Grace in a significant way? Would he have felt differently if Grace were still alive and able to answer his questions [pp. 338–39]? How does Miles’s own situation—particularly his separation from Janine and his discovery of the relationship between Charlene and David—color his reaction to his mother’s affair? How does his brief conversation with Max about Grace and Charlie [p. 373] shed light on the relationship between father and son?

5. Janine calls Miles “The World’s Most Transparent Man” [p. 42], and Tick says, “It’s not like you don’t have any [secrets]. . . . It’s just that everybody figures them out” [p. 107]. Does Mrs. Whiting share this view of Miles? What evidence is there that she sees and understands more about the “real” Miles than the people closest to him?

6. How does Russo use minor characters to develop the main figures? What roles do Horace Weymouth, Bea Majeski, Charlene Gardiner, and Otto Meyer play in shaping your impressions of and opinions about Miles, Janine, and Tick?

7. How do David’s feelings about Mrs. Whiting and the Empire Grill differ from Miles’s? Whose attitude is more realistic? Is David’s harsh criticism of Miles’s passivity [pp. 224–25] justified? What insight does it give you into David’s character? Is David more content with his life than Miles is, and if so, why?

8. Charlene tells Miles, “David has this theory that between your mom and dad and him and you there’s, like, one complete person” [p. 226]. Has each member of the family selected a particular role, or have their positions been thrust upon them? Is the division of roles a natural part of family life? Which member of the Roby family is the “most complete”? Did this strong individual identity come at the expense of anything else?

9. What does Father Mark offer Miles that he cannot get from his other relationships? Is Miles drawn to him only because he is a priest? Why does Russo depict both priests as flawed men, Father Mark with his sexual longings, and Father Tom with dementia? How would you characterize the impact of Catholicism on Miles and Grace? Does attending church genuinely comfort them, or is it a convenient way of hiding from the problems in their lives and the decisions they have made? In what ways does Grace’s confession to Father Tom and the penance he demands affect her outlook on life?

10. Why does Tick befriend John Voss? How does her sense of responsibility for him compare to Miles’s feelings, both as a child and as a grown man, about Cindy Whiting? Are the differences attributable to the circumstances that bring each pair together, or do they reflect something deeper about Tick’s and Miles’s morality and their abilities to empathize with other people? What other incidents demonstrate Tick’s understanding of what other people need? Why is she unable to treat Janine in the same comfortable, non-judgmental way she treats Miles and Max Roby?

11. Would you define Mrs. Whiting as a “mother figure” for Miles? Does she perceive herself in this way? Does Miles? Beneath their very different personas, what traits do Mrs. Whiting and Grace share? Do they represent the strengths and weaknesses usually associated with women? In what ways does Mrs. Whiting’s description of her relationship with Grace [p. 435] reaffirm their similarities? Which woman is more honest with herself about her motivations and feelings?

12. All of the marriages in Empire Falls fail in one way or another. Does your sense of who is responsible for each marital breakdown change as the events of the past and present unfold? Discuss the contrasts between the ways each of these marriages is initially described and the “real” stories: Grace and Max; Mr. and Mrs. Whiting; Miles and Janine; Janine and Walt. Mrs. Whiting says, “Most people . . . marry the wrong people for all the wrong reasons. For reasons so absurd they can’t even remember what they were a few short months after they’ve pledged themselves forever” [p. 169]. How does this assessment apply to the marriages mentioned above?

13. From the almost unimaginable cruelty of John Voss’s parents to Mrs. Whiting’s coldness toward Cindy, to Grace’s withdrawal from David (and to some extent Miles) when she joins the Whiting household, the novel contains several examples of the emotional and physical harm parents inflict on their children. Why do you think Russo made this a central theme of the book? Does it adequately explain or even justify behavior you would otherwise find completely unacceptable?

14. Empire Falls traces three very different families—the Whitings, the Robys, and the Mintys—through several generations. What do each of these families represent in the context of American society? How do their fates embody the economic and social changes that have occurred over the last century? To what extent are the members of the current generation trapped by the past?

15. What does Empire Falls provide that its residents might not be able to find anywhere else? Does living in a small town necessarily limit the satisfaction people get out of life? Is Miles right when he thinks, “After all, what was the whole wide world but a place for people to yearn for their hearts’ impossible desires, for those desires to become entrenched in defiance of logic, plausibility, and even the passage of time” [p. 295]? Which characters might have led better, more fulfilling lives if they had moved away from Empire Falls?

16. In contemplating the past year, Tick reflects, “Just because things happen slow doesn’t mean you’ll be ready for them. If they happened fast, you’d be alert for all kinds of suddenness. . . . ‘Slow’ works on an altogether different principle, on the deceptive impression that there’s plenty of time to prepare” [p. 441]. How does this relate to the novel as a whole and the way it is structured? Why has Russo chosen Tick to express this insight?

17. What adjectives would you use to describe Empire Falls? How does Russo make the story of a dying town (with more than its share of losers) entertaining and engaging? Did you find most, if not all, of the characters sympathetic in some way?

Richard Russo grew up in Gloversville, New York, a small, mostly working-class town. He received his B.A. from the University of Arizona, went on to get a Master’s Degree, and had almost earned his Ph.D. in American literature when he decided that he would rather write his own novels than analyze other people’s. He is the author of Mohawk, The Risk Pool, Nobody’s Fool, which was made into a feature film starring Paul Newman, and Straight Man. A collection of his short fiction, The Whore’s Child, will be published by Alfred A. Knopf in Summer 2002. Russo teaches writing at Colby College in Waterville, Maine.