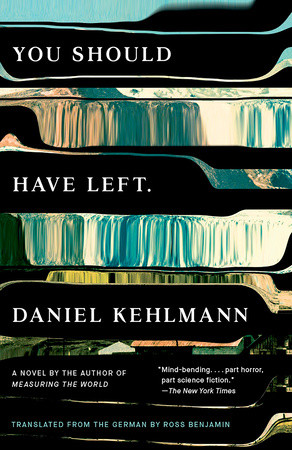 You Should Have Left

The material presented within this guide is intended to provide topics of discussion for your reading group. You Should Have Left is a haunting portrayal of a man fighting against the unknown, both inside and outside of himself. Please us these questions as guidelines only, and feel free to wander in your discussion!

From the internationally best-selling author of Measuring the World and F, an eerie and supernatural tale of a writer's emotional collapse

"It is fitting that I'm beginning a new notebook up here. New surroundings and new ideas, a new beginning. Fresh air."

This passage is from the first entry of a journal kept by the narrator of Daniel Kehlmann's spellbinding new novel. It is the record of the seven days that he, his wife, and his four-year-old daughter spend in a house they have rented in the mountains of Germany—a house that thwarts the expectations of the narrator's recollection and seems to defy the very laws of physics. He is eager to finish a screenplay for a sequel to the movie that launched his career, but something he cannot explain is undermining his convictions and confidence, a process he is recording in this account of the uncanny events that unfold as he tries to understand what, exactly, is happening around him—and within him.

1. In the beginning, the narrator and his family move to a vacation home in Germany. What is his initial reaction to the setting?

2. How does the relationship between the narrator and his wife seem when they move in? What about his relationship with his daughter?

3. How do the characters/plot from Besties contribute to the story of the narrator and his family?

4. “Marriage. The secret is that you love each other anyway” (p. 9). How do you feel about that statement?

5. After the first unintended words in his journal, and his first nightmare, what did you think of the narrator’s mental state?

6. Discuss the narrator’s trip to the village store. Why do you think the proprietor questions him so closely about Steller? Who/what does Steller represent?

7. The narrator’s reflection seems to keep disappearing. Perhaps a trick of the light? A picture that was nailed to the wall disappears. Do you think the house is trying to drive him crazy? What other explanations might there be?

8. Susanna and the narrator agree to leave immediately. While she’s packing, he discovers evidence of her affair. Do you think it’s a coincidence that this happens when they were all about to get away?

9. Discuss what happens when the narrator tries to use the triangle ruler.

10. The store proprietor tells the narrator that the road has always been there, and local legend says a tower once stood where the house is. “The devil built it and a wizard destroyed it, with God’s help. Or the other way around, a wizard built it, and God destroyed it” (p. 87). How does this fit in with what is happening to the family?

11. The narrator tries to escape down the mountain with his daughter, only to be returned to the place where he started. What is his reaction?

12. “It’s the place itself. It’s not the house. The house is harmless, it’s simply standing where nothing should stand” (p. 102). Discuss what this means.

13. “I know now why they all have faces like that. Why they look the way they look. It’s because of the things they have seen” (p. 103). Who is the narrator describing? Who do you think they are?

14. Do you think the house is trying to make the family leave, or trap them there?

15. How much of what happens to the narrator is due to him going insane?

16. What do you think happens to the narrator at the end?

Daniel Kehlmann was born in Munich in 1975 and lives in Berlin and New York. His works have won the Candide Prize, the Doderer Prize, the Kleist Prize, the Welt Literature Prize, and the Thomas Mann Prize. Measuring the World was translated into more than forty languages and is one of the greatest successes in postwar German literature.