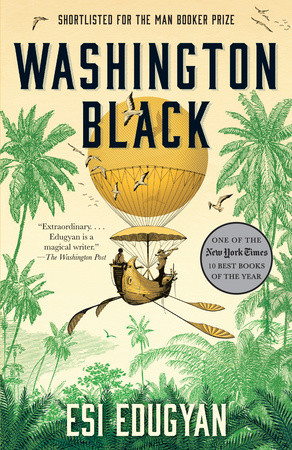 The discussion questions and suggested reading that follow are designed to enhance your group’s discussion of Washington Black, the sprawling, emotionally piercing odyssey of a young boy who escapes slavery in Barbados and goes on to discover the true meaning of freedom, beyond the bounds of the only world he has ever known.

1. Big Kit tells Washington that “If you dead, you wake up again in your homeland. You wake up free.” How does this line resonate at the end of the book, in the final moments as Wash asks about Dahomey and looks out into the horizon?

2. Why do you think Big Kit didn’t tell Wash that she was his mother? Do you think he would have responded to Titch’s offer differently had he known? How might his life have been different?

3. Another secret kept in the novel is when Philip delays giving Titch the news of his father’s death—which turns out not to be true. How does this lie compare to Big Kit’s? How is Titch’s response different from Wash’s?

4. Wash describes his scar from the explosion with the Cloud Cutter as “the utter destruction [that] his act had now wrought upon my life.” Discuss the kinds of scars the characters sustain in the novel, both visible and invisible.

5. Tanna tells Wash, “You are like an interruption in a novel, Wash. The agent that sets things off course. Like a hailstorm. Or a wedding.” How does this metaphor manifest in literal and symbolic ways throughout Wash’s journeys?

6. Wash’s final meeting with Titch calls into question Titch’s motives for educating him. Wash accuses Titch of not really treating him as more than a slave. What is Wash’s benchmark for love and trust? Do Big Kit and Tanna fill the holes in his life that send him on an “erratic pursuit of an unanswerable truth [and] calm my sense of rootlessness—solve the chaos of my origins”?

7. Describe Wash and Tanna’s relationship. What qualities and life experiences do they share that draw them together? What differences create a gulf between them?

8. How is Wash sometimes manipulated by those around him? Who would you say is the worst offender? As one example, consider the bounty Erasmus puts on his head. Do you believe Titch’s remark that it was more a way to get back at Titch than a desire to find Wash?

9. What does it mean to be a “master” in this time period and for these characters? Recall Wash’s first impression of Philip as “the oddity of a body used for nothing but satisfying urges, bloated and ethereal as sea foam, as if it might break apart. He smelled of molasses and salted cod, and of the fine sweetness of mangoes in the hot season.”

10. Part of what Titch first notices in Wash is an uncanny gift for drawing. How does the ability to observe and record run through the novel as a motif? What becomes, as Titch says, “worthy of observation”?

11. What draws Wash to the beauty of the octopus? What does it mean for him, a former slave, to capture it and other specimens for study and display, even with the motive of showing people that creatures they thought were “nightmarish . . . were in fact beautiful and nothing to fear”?

12. Titch’s confession about how he treated Philip as a boy reveals a new side of him to Wash. Does this revelation lead you to feel more or less compassion toward him? Does it complicate his relationship with Wash?

13. The novel is set between 1830 and 1836 and takes place on multiple continents. How are the larger global and political tremors shaking the world during this time felt through the characters? For example, Titch is described as an Abolitionist and often derided for it. How does this aspect of his worldview affect the way he behaves? What about your perceptions of him as a character?

14. Today in 2018, there are many groups suffering under the oppression of cruel governments and leaders. How might a narrative of their experiences compare to Wash’s? How are today’s oppressed being given or denied a voice?