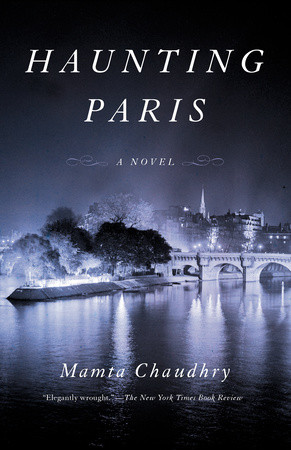 1. The “haunting” of Haunting Paris of course refers to the ghost of Julien, who partially narrates the novel, but spectral presences of the past hover over much of the novel’s action. Who/what else is haunting the characters in the novel? Who else is haunted?

2. The “present-day” portions of the novel are set in 1989, two hundred years after the French Revolution and fifty years after the Second World War. How is Paris’ vibrant and sometimes violent history present for the characters in 1989? How do they confront history as they move around the city?

3. What struck you about the novel’s depiction of grief? What rang true to your own experiences of grief in your life?

4. How did you understand the role of music in the novel? How has music been a tool for human connection in your own life?

5. Much of the novel takes place on the Ile Saint-Louis in the Seine, where many famous writers and artists once lived. Why do you think the author chose to put Sylvie and Julien’s apartment on this island?

6. Why do you think Sylvie chooses to search for the truth about Julien’s sister? How do you see Sylvie change as she delves further into her quest for knowledge?

7. In Haunting Paris, the lines between life and death can be hazy. For example, do you think Sylvie is truly “living” at the beginning of the novel? Is Julien really dead? How do these concepts shift over the course of the book?

8. The round-up of Jews in Paris is one of the most shocking scenes in the novel.  Did you discover other periods of anti-Semitism in this story?  Do you think that the promise to “Never Forget” is being kept?

9. Julien admires Sylvie’s courage, while she sees herself as timid and cowering.  What act of courage on her part first attracted Julien’s attention?  Are there other people in the book who speak up when it would have been easier to remain silent?  Have you ever been in a situation where you were the lone voice in the room to speak up?  How did that feel?

10. Since Julien is a psychiatrist and a student of Freud—whose book The Interpretation of Dreams was groundbreaking in the field—he obviously hears a lot of patients talking about their dreams, including those that recur.  What dreams in the book struck you as particularly meaningful in terms of the light they shed both on the characters and on the story?