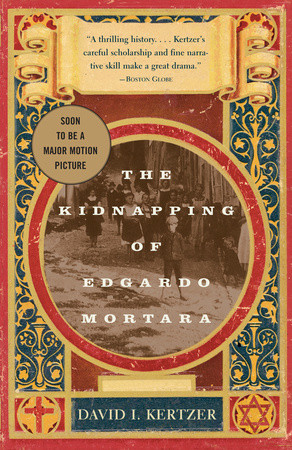 The Kidnapping of Edgardo Mortara

The questions, discussion topics, and author biography that follow are intended to enhance your group's reading of David Kertzer's The Kidnapping of Edgardo Mortara. The book tells the dramatic story of a Jewish child torn away from his family, a child whose fate would have powerful consequences for the future of both the Italian nation and the Catholic Church.

At nightfall one June evening in 1858, a knock sounds at the door of a Jewish family in Bologna, Italy, then part of the Papal States. The dumbfounded couple, Momolo and Marianna Mortara, find a phalanx of police awaiting them. Their fright turns to panic when the police chief announces that he has been ordered to take away their six-year-old son, Edgardo. "You have been betrayed," he tells them. Someone, he says, has secretly baptized the boy, and now that the boy is Christian, he cannot remain with Jewish parents.

Despite their pleas to the Inquisitor of Bologna, who had heard the rumor of the Jewish boy's baptism and ordered the child seized, little Edgardo was removed by the police and sent to a Church institution in Rome dedicated to the conversion of the Jews. The parents, still believing that the taking of their son was a mistake--for they were sure Edgardo had never been baptizedÜput their faith in Pope Pius IX. The Pope, however, stood firm in the face of a storm of international protest demanding that he send Edgardo back to his parents. Indeed, he began to see Edgardo regularly and to regard Edgardo as his own son.

The Kidnapping of Edgardo Mortara tells of the desperate attempts of the Mortaras to get their child back. The case drew in emperors and ambassadors, and Italian patriots seized on it as well, eager as they were to discredit the Papal States and to bring about the unification of Italy. Before the story ended, the Mortara family, the Papacy, and Italy would be changed forever.

1. Marshal Lucidi, who headed the police squad that took Edgardo from his home, seemed ill at ease with his task. Do you think he had sincere doubts about the justice of what he was doing, or did he simply dislike an unpleasant assignment?

2. Why do you think Father Feletti, the Inquisitor, granted a 24-hour reprieve before the taking of Edgardo from his parents? Should this be seen, as he later portrayed it, as evidence for his desire to be as humane as possible about his order to have Edgardo seized?

3. Cases of "forced baptism" such as this had occurred many times in the past. How can you explain the fact that it was only in the Mortara case that the taking of a small Jewish child on orders of the Inquisition led to such a huge international backlash against the Church?

4. When the Mortara's relatives initially heard the tearful story that Anna Morisi, the former servant, told about baptizing Edgardo, they believed her. Do you? What reasons might she have had for inventing the whole story of the baptism? Do you think she was capable of it? Is there any grounds for supposing that Anna Morisi told her story of baptizing Edgardo in order to win a dowry from the Inquisitor? How credible do you think this theory is?

5. How do you interpret the claim of the grocer, Cesare Lepori, that Anna Morisi was lying when she said it was he who had suggested baptizing Edgardo? Who was telling the truth, and how can you be sure?

6. WIn trying to win back Edgardo, the Mortaras did all they could to discredit Anna Morisi's testimony, including gathering salacious sexual material to be used against her. Were the Mortaras acting immorally in doing this?

7. The Rector of the House of the Catechumens told the Mortaras that they had a blessed solution to their problems. All they had to do was join their son and accept baptism, and the boy would be returned to them. They never seem to have seriously considered this option. Why not? Should they have? If you were in their situation, would you?

8. How significant were the tensions that developed between the leadership of the Jewish community of Rome, on the one hand, and the Mortara family and the Jews of Bologna on the other? Was the Jewish secretary of Rome justified in blaming Jews outside Rome for the failure to win back Edgardo, based on his argument that only quiet diplomacy would work?

9. Two tales soon developed in 1858, one of a tearful, frightened boy, violently taken from his loving father's arms, and begging continually to be allowed to return home. The other told of a child who, no sooner free of his (Jewish) parents' influence, was filled with Christian spirit and the desire to be a good Catholic and dreaded the prospect of returning home. Which of these accounts seems more credible to you and why? Do you think the Church was fabricating its account or sincerely believed in it? Should the child's attitude have made any difference in determining whether he should have been returned to his parents?

10. Exactly when do you think it was that Edgardo decided he wanted to remain Catholic? How do you explain this transformation?

11. Is there any parallel between the Church's defense of its arguments in the Mortara case and the argument sometimes used by state authorities today that taking a child away from his parents may be in the child's best interests?

12. Following the fall of Bologna to the troops of unified Italy, the Inquisitor was arrested and charged with kidnapping Edgardo. He argued that the civil court had no authority to try him. How valid was this claim?

13. Do you agree with the verdict in the kidnapping trial? Should the case have hung on the issue of whether the Inquisitor had acted according to the laws then in effect in the Papal States? Did the Inquisitor in fact scrupulously follow the law?

14. With much of the Papal States falling in 1859-1860, how hopeful do you think the Mortara parents were at the time that they would get their still small child back?

16. Marianna Mortara was often portrayed in the media as totally incapacitated by what had happened to her son. How accurate do you think this characterization was? To what extent are gender stereotypes at work here?

17. From Pope Pius IX's perspective, he had suffered greatly and lost much ground politically in order to stand up for a matter of principle in holding onto Edgardo. Do you believe the Pope was sincere in this belief that he was acting for the child's best interest, and that he had no choice but to keep the child from his parents? Was the Pope not affected at all by political motives?

18. The Pope singled the press out for special blame for their role in the Mortara case. What role did the press play in the case? Was the press acting responsibly? Could the case have taken the course it did a century earlier, when no such popular press existed?

19. Discuss the plays that were written based on the Mortara case in the following years. What do they tell us about attitudes at the time toward the Jews in France and Italy? How would a play written today differ from those earlier plays?

20. When Rome finally fell in 1870, should the new authorities have acted to return Edgardo (then age 19) to his family? What if Edgardo were then age 16, would this change your opinion about what should have been done?

21. Was Momolo's subsequent arrest on a charge of murder the product of anti-Semitism, or did the authorities have strong evidence implicating him?

22. How do you interpret Edgardo's attempts to make contact with his family later in his life? Were those of his siblings who wanted to have nothing to do with him justified in their attitude?

23. What lessons does the Mortara story have for religious belief and practice today? Can a religion that believes it alone knows the will of God be expected to favor religious pluralism and the equality of all religions?

Since 1992 David Kertzer has been the Paul Dupee, Jr. University Professor of Social Science at Brown University, where he is also Professor of anthropology and history. He had previously been the William Kenan Professor of Anthropology at Bowdoin College, and has been a visiting faculty member at the Universities of Catania and Bologna in Italy, at Trinity College, Cambridge, England, and the Ecole des Hautes Etudes en Sciences Sociales in Paris. Kertzer's work falls at the intersection of anthropology and history, and he is an expert on the rise of modern family life in the West. His recent book, Sacrificed for Honor (Beacon Press, 1993), exposed the massive abandonment of newborn babies that took place in much of Europe up through the nineteenth century. He has also been at the forefront of a scholarly movement that highlights the central role played by symbols, myths, and ritual in politics. His book, Ritual, Politics, and Power (Yale University Press, 1988, translated into Italian and Chinese) has drawn a great deal of attention and provoked international debate. More recently, he has examined the difficulties faced by western communist parties in trying to redefine themselves as noncommunist (Politics and Symbols, Yale University Press, 1996). Kertzer has also written opinion pieces for many newspapers--such as The Washington Post, The Christian Science Monitor, and The Baltimore Sun--on how to interpret politics through symbolism, and he has appeared on national television news and radio shows to discuss this topic. His popular journalism includes a cover story that appeared in TV Guide: an anthropologist's view of the Super Bowl. In February 1998, his piece on Church responsibility for anti-Semitism appeared on The New York Times op ed page. Kertzer is the recipient of many honors: a Guggenheim Fellowship, a National Endowment for the Humanities fellowship, a Fulbright fellowship, various National Science Foundation and National Institutes for Health research awards, and a fellowship year at the Center for Advanced Study in the Behavior Sciences, Stanford. The Kidnapping of Edgardo Mortara (published in hardcover by Knopf, paperback issued in July 1998 by Vintage, and also published so far in Italy, France, Germany, Britain, and Brazil, with an Israeli edition in press) was a finalist for the 1997 National Book Award for Nonfiction, and won a Jewish National Book Award for 1997. Two of his other books have been awarded prizes as the best books of the year in Italian history, and he is the founding editor of the Journal of Modern Italian Studies. As movingly discussed in the afterword to The Kidnapping of Edgardo Mortara, Kertzer's interest in the largely forgotten drama of the little Jewish boy seized on the order of the Inquisitor was sparked not only by his scholarly interests, but by his family background as well. His father, Jewish chaplain with the American armed forces that liberated Rome, presided over the first service held at Rome's synagogue in the days after Liberation in 1944. Both film rights and stage rights to The Kidnapping of Edgardo Mortara have recently been sold. Alfred Uhry, Pulitzer Prize-winning author of Driving Miss Daisy and other plays and screenplays, is currently preparing the stage version. David Kertzer lives in Providence, RI, with his wife, Susan, and is father of Molly, age 24, and Seth, 22. He is currently working on another book for Knopf, on the Popes and the Jews. In connection with that project, he became, in the summer of 1998, one of the first scholars not connected with the Vatican to be admitted to the previously closed archives of the Inquisition in Rome.