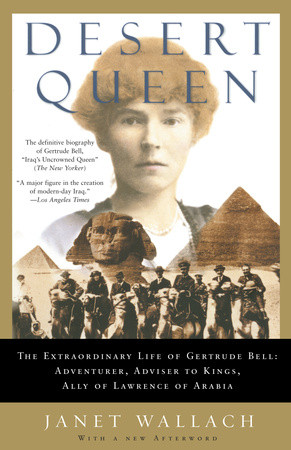 This Reading Group Guide—consisting of an introduction, discussion questions written by the author, suggestions for further reading, and author biography—is intended to enhance your group’s discussion of Janet Wallach’s Desert Queen, the remarkable biography of the woman who, because of her love of Arab culture, came to wield significant power in the British Empire.

Turning away from the privileged world of the "eminent Victorians," Gertrude Bell (1868-1926) explored, mapped, and excavated the world of the Arabs. Recruited by British intelligence during World War I, she played a crucial role in obtaining the loyalty of Arab leaders, and her connections and information provided the brains to match T. E. Lawrence's brawn. After the war, she played a major role in creating the modern Middle East and was, at the time, considered the most powerful woman in the British Empire.

In this masterful biography, Janet Wallach shows us the woman behind these achievements—a woman whose passion and defiant independence were at odds wit the confined and custom-bound England she left behind. Too long eclipsed by Lawrence, Gertrude Bell emerges at last in her own right as a vital player on the stage of modern history, and as a woman whose life was both a heartbreaking story and a grand adventure.

1. Gertrude Bell was born in 1868 at the height of the British Empire, when the British navy ruled the seas and British merchants supplied food and clothing to half the world’s population. The Bell family lived in northern England and employed 40,000 workers in their coal and iron works. In addition to running their prosperous business, Gertrude’s father Hugh Bell and her grandfather Lowthian Bell were well-educated, intellectually curious, adventurous, and politically engaged. Hugh Bell’s motto was “obstacles are made to be overcome.” How did Gertrude Bell’s upbringing shape her? How did she apply her father’s philosophy to her life?

2. Gertrude Bell was a difficult child: precocious, stubborn, and naughty enough to discourage her nannies from staying on the job. She prided herself on being better than the others around her, and as she grew up, her best friends were her brother Maurice and her cousin Billy Lascelles. In her adolescent years, she always seemed at odds with her stepmother; the one woman she seemed to care for was her aunt Florence, whose husband was the British ambassador to Bucharest and Tehran. What were Gertrude Bell’s relationships like with other women? Why did she have such disdain for the British wives in Baghdad? Were there any women she admired? Did her attitude toward women change over the years? If so, how did it manifest itself?

3. Like most young women of her time, Gertrude Bell was expected to marry by the age of twenty. Although she was intellectually outstanding, from a marital point of view she was a failure, having found neither a husband nor a fiancé by that time. She was sent abroad to give her some sophistication and to prevent her from becoming a bluestocking. Yet when she fell in love with Henry Cadogan, her father told her he would not give her permission to marry. Why did her father object to the match? Why did she obey his wishes? Gertrude seemed unusually close to her father and continued to ask for his advice even after she became an important official. How would you characterize their relationship? How did it influence her relationships with other men?

4. Although women were often treated as second-class citizens, Gertrude Bell received the finest education and was given many of the privileges of a man. She was sent to college in London, and then was able to attend Oxford University. She was given freedom to travel around the world, was a published writer while still in her twenties, and often discussed politics with members of Parliament and British diplomats. In light of this, how did she respond to the women’s suffrage movement? Why did she feel this way?

5. The Bedouins gave Gertrude Bell the complimentary title of “an honorary male.” When she was in the desert, she was able to march into the tents of the sheikhs. The tribal leaders often hosted her for one or two nights, sharing their best food and enjoying conversations with her that ranged from local gossip to world politics. Yet in their own world, the Arabs kept their women in separate quarters, did not allow them to take their meals with the men, and had little regard for women’s opinions. Why did the sheikhs accept Gertrude Bell as an equal and even treat her as a dignitary? How similar were the attitudes of the Arab notables and the British male officers and officials?

6. During World War I there were three different agreements the British made concerning the future of the Arab lands after the breakup of the Ottoman Empire. When they were revealed, these agreements created anger and confusion among all three groups. What were the agreements and among whom were they made? What impact did they have on the Middle East?

7. When the British decided on Emir Faisal to lead the new state of Iraq, they knew they would have problems. Faisal came from an important Sunni family yet he had never set foot in Mesopotamia. Why were they determined to put him on the throne? What were the political reasons? What sort of person was he? Why did the British believe he would be accepted by the Shiites? What was his role in the Arab revolt against the Turks? Gertrude Bell knew that the Arabs in Mesopotamia had a long, rich history. How did she teach Faisal this history? Faisal had to be approved by a referendum, yet he knew no one when he arrived in Iraq. What did Gertrude Bell do to make sure Faisal would be approved?

8. When the British entered Baghdad after the defeat of the Turks, they declared themselves liberators and received a warm welcome from the Arabs. Shortly afterward, attitudes changed, and the British were considered the enemy. What happened to change opinions? How did the British treat the Arab unrest? What was the British opinion at home concerning Mesopotamia? Why did England turn to the League of Nations? What was Winston Churchill’s role?

9. Today, it is often questioned why Iraq looks the way it does geographically and demographically. How were its borders decided? What was Gertrude Bell’s role in this process? Did the British know there was oil, and if so, was it the only consideration? Why are the Kurds included in the population? Why were the Sunnis given control? What were the Kurds’ allegiances?

10. The Baghdad Museum has sometimes been in the news because of the destruction and theft of many of its antiquities. What was Gertrude Bell’s connection to this museum? Why was she interested in it? How did she become interested in archaeology? What discoveries did she make in her earlier travels? What did she do to prevent foreign archaeologists from removing antiquities from the country? Why are antiquities important to a country?

Janet Wallach is the author of The Richest Woman in America: Hetty Green in the Gilded Age, as well as Seraglio and Chanel: Her Style and Her Life. She is also coauthor, with her husband John Wallach, of three previous books on the Middle East: The New Palestinians; Arafat: In the Eyes of the Beholder; and Still Small Voices: The Real Heroes of the Arab-Israeli Conflict. She lives in New York City.