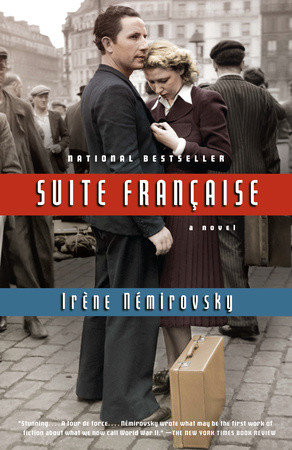 “Extraordinary. . . . A work of Proustian scope and delicacy, by turns funny and deeply moving.”
—Time

The questions, suggested reading, and author biography that follow are intended to enhance your group’s discussion of Suite Française, a novel which created a literary sensation when it was published in France in 2004. When it first appeared in English translation in 2006, many critics and writers chose it as the book of the year. Suite Française is in itself an extraordinary literary achievement, and the circumstances of its writing and publication add to its interest and pathos.

By the early l940s, when Ukrainian-born Irène Némirovsky began working on what would become Suite Française—the first two parts of a planned five-part novel—she was already a highly successful writer living in Paris. But she was also a Jew, and in 1942 she was arrested and deported to Auschwitz: a month later she was dead at the age of thirty-nine. Two years earlier, living in a small village in central France—where she, her husband, and their two small daughters had fled in a vain attempt to elude the Nazis—she’d begun her novel, a luminous portrayal of a human drama in which she herself would become a victim. When she was arrested, she had completed two parts of the epic, the handwritten manuscripts of which were hidden in a suitcase that her daughters would take with them into hiding and eventually into freedom. Sixty-four years later, at long last, we can read Némirovsky’s literary masterpiece.

The first part, “Storm in June,” opens in the chaos of the massive 1940 exodus from Paris on the eve of the Nazi invasion, during which several families and individuals are thrown together under circumstances beyond their control. They share nothing but the harsh demands of survival—some trying to maintain lives of privilege, others struggling simply to preserve their lives—but soon, all together, they will be forced to face the awful exigencies of physical and emotional displacement, and the annihilation of the world they know. In the second part, “Dolce,” we enter the increasingly complex life of a German-occupied provincial village. Coexisting uneasily with the soldiers billeted among them, the villagers—from aristocrats to shopkeepers to peasants—cope as best they can. Some choose resistance, others collaboration, and as their community is transformed by these acts, the lives of these men and women reveal nothing less than the very essence of humanity.

Suite Française is both a singularly piercing evocation—at once subtle and severe, deeply compassionate and fiercely
ironic—of life and death in occupied France and a brilliant, profoundly moving work of art.

1. The Péricands were mistrustful of the government, yet “Monsieur Péricand’s position as curator of the country’s national museums bound them to an administration that showered its faithful with honours and financial rewards” [p. 6]. Given their wealth and social position, is it unsurprising that people like the Péricands would
collaborate with the Vichy government? Does the novel present moral failure as understandable or repellent?

2. In the exodus from Paris, Gabriel Corte is looking at the people around him: “‘Such ugliness…such hideous faces!’ Overcome, he turned round to face inside the car and closed his eyes. . . . ‘Did you see that horrible old woman beside us with her birdcage and bloodstained bandages?’” [pp. 47–48]. Corte is a successful novelist. What kind of sensibility does he have? How does he differ, as an observer of life, from Némirovsky?

3. Madame Michaud longs for news of her son Jean-Marie, who is a soldier. In chapter 12, she and Maurice are present when German bombs strike a train carrying wounded French soldiers. Jean-Marie is on this train, though his parents don’t know it, and they eventually return home still longing for news of him. Later, having stolen gasoline from a young couple on the road and finally arrived at home, the aesthete Charles Langelet is killed by a car driven by Arlette, Corbin’s ex-mistress. Discuss the effects of this approach to plot construction, in which Némirovsky directs the movements of characters whose paths converge and diverge in unexpected ways.

4. “In spite of the exhaustion, the hunger, the fear, Maurice Michaud was not really unhappy. He had a unique way of thinking: he didn’t consider himself that important; in his own eyes he was not that rare and irreplaceable creature most people imagine when they think about themselves” [pp. 54–55]. Why is Maurice “unique” in this? Given the novel’s broad array of selfish and narcissistic characters, do the Michauds seem to stand as models of moral decency?

“The glass roof shattered and exploded outwards, wounding and killing the people in the square. Panic-stricken, some of the women threw down their babies as if they were cumbersome packages and ran. Others grabbed their children and held them so tightly they seemed to want to force them back into the womb, as if that were the only truly safe place” [p. 60].

“Machine-guns fired on the convoy. Death was gliding across the sky and suddenly plunged down from the heavens, wings outstretched, steel beak firing on this long line of trembling black insects crawling along the road. Everyone threw themselves to the ground; women lay of top of their children to protect them. When the firing stopped, deep furrows were left in the crowd, like wheat after a storm when the fallen stems form close, deep trenches” [p. 82].

What characteristics of style, vision, or sensibility make Némirovsky’s descriptive writing so powerful?

6. Arlette, the dancer who is one of the banker Corbin’s mistresses, has ensconced herself in Tours where she provides Hubert Péricand with his first sexual experience. What motivates Arlette, and how does she manage to survive so well in the world [pp. 94–103]?

7. Chapter 20 of “Storm in June” is told from the perspective of the Péricands’ cat Albert [pp. 104–107]. What details does the cat perceive? What does Némirovsky’s desire to include this playful chapter in the story tell us about her vision as a novelist?

8. Carmen Callil, author of Bad Faith, a widely hailed biography of a Vichy collaborator, observes, “Némirovsky has a particular talent, a nearness to her readers, so that you almost feel the flesh of the characters she creates, however vile, rapacious and idiotic they may be. This is where she is irresistible—addictive—so that once you pick up one of her novels, you cannot put it down” [The Guardian, February 3, 2007]. Which characters, either good or bad, come most powerfully to life, and what particular details about them are most striking?

9. Is it surprising that Father Philippe’s instincts about the nature of the orphan boys was correct [p. 24]? What do the scenes in chapter 25 suggest about Némirovsky’s perspective on human evil? What is the effect of reading the scenes that describe his fate [pp. 135–144]?

10. Némirovsky brilliantly delineates class tensions and resentments throughout Suite Française. The man in the battered Citroën, first commented upon with disgust by Gabriel Corte [p. 48], has stolen Corte’s picnic basket and his family enjoys a bottle of champagne and an elegant lunch. The woman with the bandaged head, wounded and possibly widowed, thinks, “Privileges, exemptions, connections, all that was for the middle classes. Deep in her heart were layer upon layer of hatred, overlapping yet distinct: the countrywoman’s hatred, who instinctively detests city people, the servant’s hatred, weary and bitter at having lived in other people’s houses, the worker’s hatred” [pp. 71–72]. Does Némirovsky suggest that these hatreds among the French are partially to blame for their defeat by the Germans? Or do you see them simply as indicating Némirovsky’s gifts as a social realist?

11. In the village of Bussy, the women think of the occupying Germans as “our masters,” and look at them “with a mixture of desire and hatred. (The enemy? Of course. But they were also men, and young . . .)” [p. 213]. How is this ambivalent mix of desire and hatred expressed in relations between the French women and the Germans in “Dolce”?

12. In sentences like the following, Némirovsky demonstrates how attached the French are to their material possessions: “Life in the provinces of central France is affluent and primitive; everyone keeps to himself, rules over his own domain, reaps his own wheat and counts his own money” [p. 217]. Which scenes and characters demonstrate this material attachment most clearly? Does Némirovsky seem to be critical of this aspect of bourgeois life? What are its implications for the ways people behave toward each other?

14. How is Lucile changed by her decision to help Benoît Sabarie? What does she mean when she says to herself, “I’ve already chosen . . . in spite of myself. And I thought I was free” [p. 338]. Why does she reject Bruno, and is it admirable of her to do so?

15. At the beginning of her personal notebook Némirovsky wrote, “My God! what is this country doing to me? Since it is rejecting me, let us consider it coldly, let us watch as it loses its honour and its life. And the other countries? What are they to me? Empires are dying. Nothing matters. . . . Let us keep a cool head. Let us harden our heart. Let us wait” [p. 373]. In what ways do you see this cool, observant perspective realized in the novel?

16. Némirovsky wrote in her notebook, “Never forget that the war will be over and that the entire historical side will fade away. Try to create as much as possible: things, debates . . . that will interest people in 1952 or 2052. Reread Tolstoy. Inimitable descriptions but not historical” [p. 383]. What does this entry emphasize about Némirovsky’s interest in observation and description? What do the notebook entries convey about her writing process, the overall arc of the intended work, and her frame of mind as she wrote?

17. Much has been made in the literary press of the fact that Némirovsky did not include any Jewish characters in the novel. Why might she have made such a choice?

Irène Némirovsky was born in Kiev in 1903 into a wealthy banking family and emigrated to France during the Russian Revolution. After attending the Sorbonne, she began to write and swiftly achieved success with an early novel, David Golder, which was followed by The Ball, The Flies of Autumn, Dogs and Wolves, and The Courilof Affair, among others. She died in 1942.