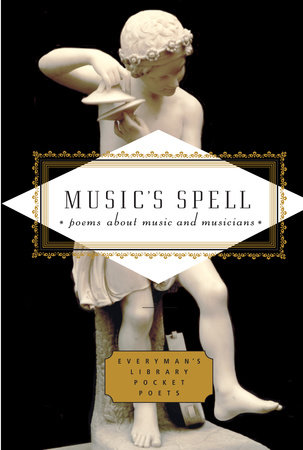 Music’s Spell, a new title in the Everyman’s Library Pocket Poets series, is a gathering of poetry from a wide variety of voices through time (William Congreve, Samuel Taylor Coleridge, Amy Lowell, Langston Hughes, Anna Akhmatova, to name a few) on the subject of music’s power, on pop and rock and jazz and blues, on composers and instruments. An unexpected treasure is Joyce Carol Oates’s entry on the King.

This place up in Charlotte called Chuck’s where I
used to waitress and who came in one night
but Elvis and some of his friends before his concert
at the Arena, I was twenty-six married but still
waiting tables and we got to joking around like you
do, and he was fingering the lace edge of my slip
where it showed below my hemline and I hadn’t even
seen it and I slapped at him a little saying, You
sure are the one aren’t you feeling my face burn but
he was the kind of boy even meanness turned sweet in
his mouth.

Smiled at me and said, Yeah honey I guess I sure am.

Check out the table of contents

About the editor, Emily Fragos