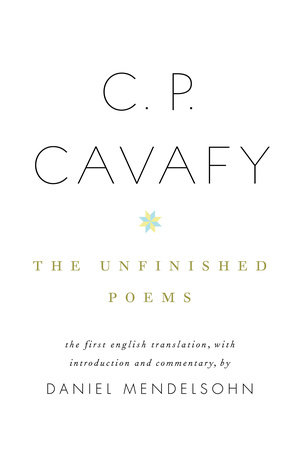 With The Unfinished Poems, Daniel Mendelsohn has rendered, for the first time in English, the final thirty poems of Cavafy. At the time of the poet’s death, at age seventy, in 1933, these poems were found in various draft stages, meticulously labeled and enclosed in separate envelopes (actually, homemade “dossiers” the poet constructed himself, out of materials such as the jackets of his own previous self-published collections). It took some decades for the drafts to be discovered in Cavafy’s archive by George Savidis, his editor, and then several more for Renata Lavagnini, an Italian scholar and authority on Cavafy as well as a philologist, to edit and make sense of the poet’s scribbles and crossed-out lines, insertions and notes, in order to arrive at the most likely version of his intentions for each developing poem. The results of Lavagnini’s work were published in a scholarly Greek edition in 1994, and have now come to us through Mendelsohn’s elegant translations. As he tells us in his Introduction to the book, unlike other cases of the posthumous discovery of a writer’s unpublished works, these poems are especially extraordinary because they consist of mature works from the end of Cavafy’s life, rather than the juvenalia or rejected early work which is usually all that is left to be discovered once a writer is gone.

This group, Mendelsohn writes, represents “the last and greatest phase of the poet’s career: the decade and a half from 1918, when Cavafy was fifty-five—and when, too, he published the first of his ‘sensual’ (or ‘aesthetic’) poems that were explicitly homosexul in nature—until the year before his death at the age of seventy. For this reason they are of the deepest significance not merely inasmuch as they illuminate the existing works that constitute the Collected Poems, but as serious works of art in themselves, the deeply wrought products of a great poetic consciousness at its peak.” Cavafy’s special perspective as a homosexual and as a diaspora, Alexandrian Greek, Mendelsohn explains, “allowed Cavafy to achieve his unique tone, at once sardonic and compassionate, world-weary and often disappointed, but also so movingly forgiving of the weaknesses and vanities and foibles in his characters—kings, generals, pretentious poetasters, lovers, rent-boys—to which he knew we are all subject…This self-described ‘poet-historian’ did not, as it so often appears, have two subjects—present desire and the ancient past—but looked at the decline of civilzations dead for a thousand years and the end of love affairs that sputtered only months ago with the same eye: the shrewdly assessing but always humane eye of both the historian and the poet, each of whom knows that he cannot begin his work until time has passed, revealing the true nature of the object of his contemplation.”

As Mendelsohn reminds us, texts constructed from unfinished drafts are always in some way hypothetical, but they can be beautiful and complete and revelatory in their own right.

Intoxicating night, in the dark, on the jetty.
And afterward in the little room of the tawdry
hotel—where we gave ourselves completely to our unwholesome
passion; hour
after hour, again and again to “our own” love—
until the new day glistened on the windowpanes.

This evening the shape of the night resembles,
revived in me, a night of the distant past.

Without any moon, extremely dark
(an advantage). Night of our encounter
on the jetty; at a great
distance from the cafés and the bars.

Listen to Daniel Mendelsohn reading Cavafy’s “It Must Have Been the Spirits.”

More about The Unfinished Poems

Meet Daniel Mendelsohn in New York on April 13, and in Oakland, CA on May 14.

Purchase an edition of Cavafy’s Collected Poems signed by Mendelsohn.