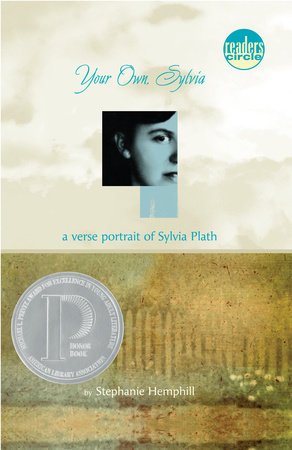 Knopf’s books for young readers include many books of poetry by an old bedtime favorite, Jack Prelutsky (whose most recent title is The Swamps of Sleethe), and lately, an unusual verse portrait of Sylvia Plath entitled Your Own, Sylvia, which is a Michael L. Printz Award Honor Book (given for excellence in young adult literature). Written by Stephanie Hemphill, the book is appropriate for high-school-aged readers and beyond, as it introduces Plath and her world through a chorus of voices around her—poems in the voice of her mother, Aurelia Plath; her “Grammy Schober”; her many boyfriends and teachers; various therapists and roommates through the years; her husband, Ted Hughes, and other significant fellow poets such as Ruth Fainlight and A. Alvarez. Today’s selection is a poem in the imagined voice of Anne Sexton, who, along with Plath, Hemphill explains in one of many thorough marginal notes to the poems, participated in a seminar taught by Robert Lowell at Boston University in the fall of 1958 and spring of 1959, also attended by the poet George Starbuck. “Lowell introduced Sylvia to confessionalism, a kind of poetry defined by placing the literal Self at the center of the poem,” Hemphill explains to young readers who may not know the term; she also usefully quotes the memoirs of Anne Sexton, placing in context the ambition and developing sense of themselves that these poets had in their twenties. Sexton wrote that she had heard “Sylvia was determined from childhood to be great, a great writer at the least of it. I tell you, at the time I did not notice this in her. Something told me to bet on her but I never asked it why. I was too determined to bet on myself to actually notice where she was headed in her work.”

Sylvia stretches her skin
to fit someone else’s bones—
her poems not yet her own.

at the Ritz, until slightly blitzed.
Drinks making us more real,
we talk suicide until laughter

tears from our eyes.
Then we bunch into my car
for the Waldorf Cafeteria’s

seventy-cent dinner,
none of us having a better
or demanding home life to return to.

I implore Sylvia to push herself,
pluck the drum of her heart
until it bleeds. Sometimes I think

Lowell praises Sylvia too much,
or maybe he just sees something
in her language that I cannot.

More about Your Own, Sylvia