April 29: The Mistake by Jack Gilbert 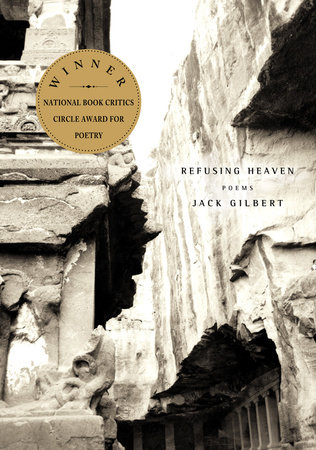 Jack Gilbert, winner of the National Book Critics Circle Award and the Los Angeles Times Book Prize for his last book, Refusing Heaven, is now in his mid-eighties, still celebrating and sorrowing to the fullest. He has returned with an elegiac collection in which he reconsiders, as the figure of Ovid says in one of the poems, “White stone in the sunlight…Both the melody / and the symphony. The imperfect dancing / in the beautiful dance. The dance most of all.”

There is always the harrowing by mortality,
the strafing by age, he thinks. Always defeats.
Sorrows come like epidemics. But we are alive
in the difficult way adults want to be alive.
It is worth having the heart broken,
a blessing to hurt for eighteen years
because a woman is dead. He thinks of long
before that, the summer he was with Gianna
and her sister in Apulia. Having outwitted
the General, their father, and driven south
to the estate of the Contessa. Like an opera.
The fiefdom stretching away to the horizon.
Houses of the peasants burrowed into the walls
of the compound. A butler with white gloves
serving chicken in aspic. The pretty maid
in her uniform bringing his breakfast each
morning on a silver tray: toast both light
and dark, hot chocolate and tea both. A world
like Tosca. A feudal world crushed under
the weight of passion without feeling.
Gianna’s virgin body helplessly in love.
The young man wild with romance and appetite.
Wondering whether he would ruin her by mistake.

More about The Dance Most of All